Mitochondria are two-layer membrane-coated organelles that are found in most cells. They are structures that make energy in cells. They are the main place for aerobic respiration of cells. Its diameter is around 0.5 to 1.0 microns. Except for amoeba, giardia lamblia, and several microsporidia, most eukaryotic cells have more or less mitochondria, but their own mitochondria have size, number and appearance are different. Mitochondria have their own genetic material and genetic system, but their genome size is limited and they are a semi-autonomous organelle. In addition to energizing cells, mitochondria also participate in processes such as cell differentiation, cell information transmission, and apoptosis, and possess the ability to regulate cell growth and cell cycle. 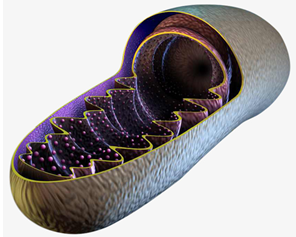 Mitochondria are organelles that provide energy in cells. Human mtDNA is a 16569bp long double-stranded molecule divided into light and heavy chains. It contains 37 genes and mainly encodes respiratory chains and proteins related to energy metabolism. Deletion or point mutation of mtDNA makes the enzymes or vectors necessary for oxidative metabolism of mitochondria obstruct. Glycogen and fatty acids cannot enter mitochondria to make full use of and produce sufficient ATP, which leads to energy metabolism disorders and complex clinical symptoms. Mitochondrial metabolic disorders can cause mitochondrial diseases, which are mainly a group of heterogeneous lesions caused by impaired ATP synthesis and insufficient energy sources due to genetic defects. Different types of mitochondrial encephalomyopathy have different ages. Mitochondria are organelles closely related to energy metabolism. Both cell survival (oxidative phosphorylation) and cell death (apoptosis) are related to mitochondrial function, especially the abnormal oxidative phosphorylation of the respiratory chain is related to many human diseases. According to different mitochondrial lesions, it can be divided into:

Lesions invade both the skeletal muscle and the central nervous system.

1. Mitochondrial myopathy usually starts at the age of 20, and is clinically characterized by skeletal muscles that are extremely intolerant of fatigue, mild activity and fatigue, often accompanied by muscle soreness and tenderness, and muscle atrophy is rare. Easily misdiagnosed as polymyositis, myasthenia gravis, and progressive muscular dystrophy.

(3) Mitochondrial encephalomyopathy with hyperlactic acidemia and stroke-like attack (MELAS) syndrome Onset before the age of 40, and more frequently in childhood. Sudden stroke-like episodes, such as hemiplegia, hemiplegia or cortical blindness, recurrent seizures, migraine, and vomiting, gradually worsen the condition.

(4) Myoclonic epilepsy with muscle fragmentation red fiber (MERRF) syndrome is most common in childhood, mainly manifesting myoclonic epilepsy, cerebellar ataxia, and weakness of the proximal limbs, which can be accompanied by multiple symmetry Lipoma.