The adrenergic receptors or adrenoceptors are a class of G protein-coupled receptors that are targets of many catecholamines like norepinephrine (noradrenaline) and epinephrine (adrenaline) produced by the body, but also many medications like beta blockers, β2 agonists and α2 agonists, which are used to treat high blood pressure and asthma.

Transporters (differently referred to as transmembrane pumps, transporters, escort proteins, acid transporters, cation transporters or anion transporters) are proteins that have the function of moving other substances in the body. Transporting proteins is critical to the growth and life of all living things. There are several different transport proteins. A carrier protein is a protein that involves the movement of ions, small molecules or macromolecules (across a biofilm. Carrier proteins are intact membrane proteins; that is, they are present within the membrane and across the membrane, which transports the material on the membrane. Protein can help the movement of matter by promoting diffusion or active transport. These mechanisms of motion are known as vector-mediated transport. Each carrier protein is designed to recognize only one substance or a very similar group of substances. Studies have linked defects in specific carrier proteins to specific diseases. A membrane transporter (is a membrane protein that acts as such a vector.

The ATP-binding cassette (ABC) transporter transporter utilizes the energy of ATP binding and hydrolysis to transport various substrates across the cell membrane. They are divided into three main functional categories. In prokaryotes, importers regulate nutrients into cells. Substrates that can be transported include ions, amino acids, peptides, sugars, and most other hydrophilic molecules. The transmembrane region of the ABC transporter protects the hydrophilic substrate from the lipids of the membrane bilayer, thereby providing access through the cell membrane. Eukaryotes do not have any importers. Exporters or effluents present in both prokaryotes and eukaryotes act as pumps for the toxins and drugs to be extruded into cells. In Gram-negative bacteria, exporters transport lipids and some polysaccharides from the cytoplasm to the periplasm. The third subgroup of ABC proteins does not function as a transporter but is involved in translation and DNA repair processes.

Ion channels are pore-forming membrane proteins that allow ions to pass through the channel pores. Their functions include controlling the flow of ions across cell membranes, controlling the flow of ions on secretory and epithelial cells, and regulating cell volume to establish resting membrane potentials, shaping action potentials and other electrical signals. Ion channels are present in the membrane of all excitable cells. Ion channels are one of two types of ionophore proteins, and the other is an ion transporter. Ion channel research usually involves biophysics, electrophysiology and pharmacology, using techniques such as voltage clamp, patch clamp, immunohistochemistry, X-ray crystallography, fluoroscopy and RT-PCR. Their classification as molecules is called channelomics. 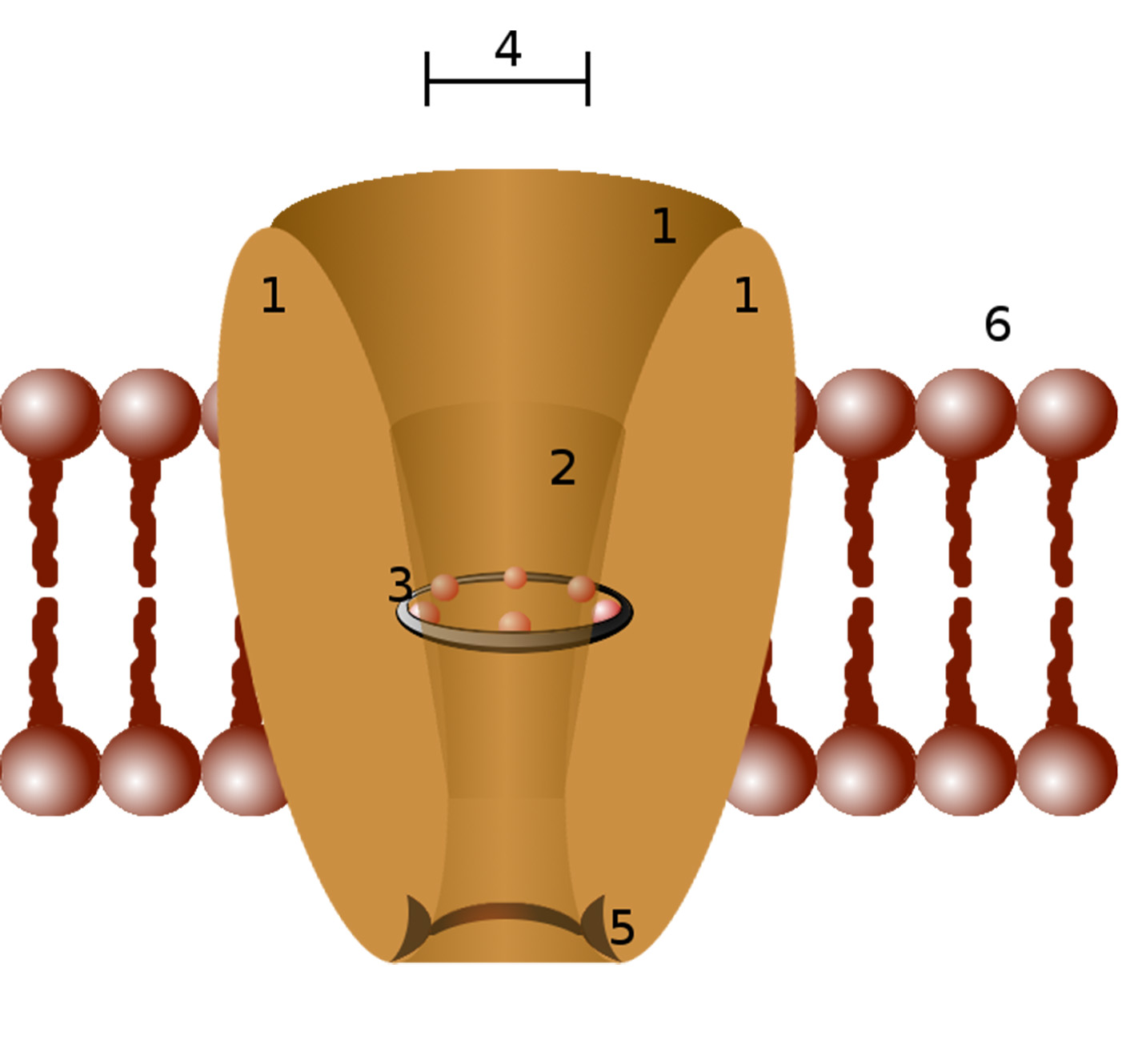 The sodium channel is a complete membrane protein that forms an ion channel that conducts sodium ions (Na+) through the plasma membrane of the cell. They belong to the superfamily of cation channels and can be classified according to the triggers of the channels that open these ions, which are voltage changes or the binding of substances (ligands) to channels (ligand-gated sodium channels). In excitable cells such as neurons, muscle cells, and certain types of glial cells, the sodium channel is responsible for the rising phase of the action potential. These channels go through three different states called stationary, active and inactive. Even if the stationary and inactive states do not allow ions to flow through the channel, their structural conformation is different.

Voltage-gated calcium channel (VGCC), also known as voltage-dependent calcium channel (VDCC), is a set of voltage-gated ion channels that are present in the membrane of excitable cells with calcium ion Ca2+ permeability. These channels are slightly permeable to sodium ions, so they are also known as Ca2+-Na+ channels, but their permeability to calcium is about 1000 times higher than sodium under normal physiological conditions. At physiological or resting membrane potentials, the VGCC is usually closed. They are activated at the depolarizing membrane potential, which is the source of the "voltage-gated" addition. The concentration of calcium (Ca2+ ions) is usually several thousand times higher than the interior of the cells. Activation of a particular VGCC allows Ca2+ to flow into the cell, depending on the cell type, resulting in activation of calcium-sensitive potassium channels, muscle contraction, excitation of neurons, up-regulation of gene expression, or release of hormones or neurotransmitters. VGCC has been immunolocalized in the transparent glomerulus of normal and proliferating human adrenal glands and aldosterone producing adenomas (APA) and in the latter T-type VGCC correlates with plasma aldosterone levels in patients. Overactivation of VGCC is a major component of excitotoxicity because severely elevated intracellular calcium levels activate enzymes, which at a sufficiently high level can degrade the necessary cellular structure.