Protein kinases are key regulators of cellular function and constitute one of the largest and most functional gene families. By adding phosphate groups to substrate proteins, they direct the activity, localization and overall function of many proteins and are used to coordinate the activity of almost all cellular processes. Kinases are particularly prominent in the coordination of signal transduction and complex functions such as the cell cycle. The diversity of basic functions mediated by kinases is shown by the preservation of approximately 50 different kinase families between the yeast, invertebrate and mammalian kinase groups. Of the 518 human protein kinases, 478 belong to a single superfamily, and their catalytic domains are related in turn. These can be clustered into groups, families and subfamilies with increased sequence similarity and biochemical function. The kinase dendrogram (top panel) shows sequence similarity between these catalytic domains: the distance along the branches between the two kinases is proportional to the difference between their sequences. Seven major groups were marked and markedly colored. For example, tyrosine kinases form a unique group whose members phosphorylate proteins on tyrosine residues, while enzymes in all other groups primarily phosphorylate serine and threonine residues. In some cases, the relationships shown on the tree can be used to predict many of the protein substrates and biological functions of the more than 100 uncharacterized kinases provided herein. The other 40 'atypical' kinases have no sequence similarity to typical kinases, but are known or predicted to have enzymatic activity, and some are predicted to have structural folds similar to typical kinases.

The main dendrogram (Figure 1) shows sequence similarity between protein kinase domains, derived from public sequences and gene prediction methods detailed by Manning et al. Domains are defined by hidden Markov model distributions and multiple sequence alignments. The initial branching pattern was constructed from contiguous trees aligned from the clustalW protein sequence of the domain. It has been extensively modified by reference to other alignments and tree construction methods (hmmalign and minimal tree) and extensive pairwise alignment of kinase domains. The curved layout is created manually. Many branch lengths are semi-quantitative, but branch mode is more informative than any single automated method. Unpublished kinases are named where possible according to family nomenclature. Several different kinases retain the digital SgK (SuGen kinase) accession number. The second domain of the dual domain kinase is named after the "~b" suffix. 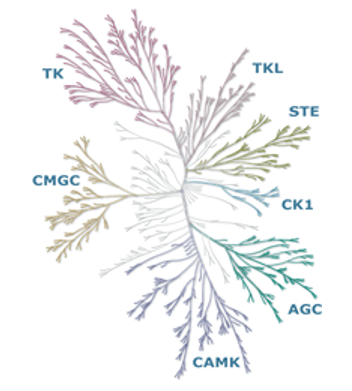 CAMK, also written as CaMK, is an abbreviation for the Ca2+/calmodulin-dependent protein kinase class of enzymes. CAMKs are activated by increases in the concentration of intracellular calcium ions (Ca2+) and transfers phosphates from ATP to defined serine or threonine residues in other proteins. Activated CAMK is involved in the phosphorylation of transcription factors and therefore, in the regulation of expression of responding genes.

Tyrosine kinase (Figure 1) is an enzyme that can transfer a phosphate group from ATP to a protein in a cell. It functions as an "on" or "off" switch in many cellular functions. Tyrosine kinases are a subclass of protein kinase. The phosphate group is attached to the amino acid tyrosine on the protein. Tyrosine kinases are a subgroup of the larger class of protein kinases that attach phosphate groups to other amino acids (serine and threonine). Phosphorylation of proteins by kinases is an important mechanism in communicating signals within a cell (signal transduction) and regulating cellular activity, such as cell division. Protein kinases can become mutated, stuck in the "on" position, and cause unregulated growth of the cell, which is a necessary step for the development of cancer. Therefore, kinase inhibitors, such as imatinib, are often effective cancer treatments. Most tyrosine kinases have an associated protein tyrosine phosphatase, which removes the phosphate group. 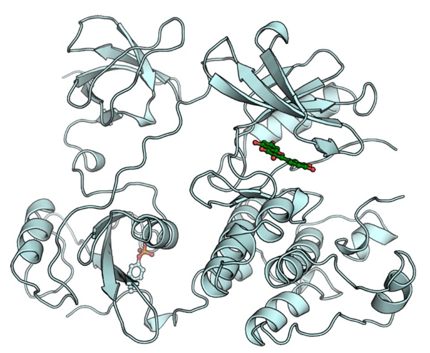