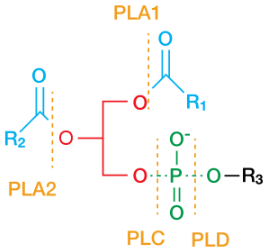 Figure 1. Cleavage sites of phospholipases. Phospholipase C enzymes cut just before the phosphate attached to the R3 moiety. (From Wikipedia)

Phospholipase C can hydrolyze phospholipids to produce a head with a phosphate group and diacylglycerol. Among them, the head with a phosphate group can be inositol phosphate, choline phosphate, and ethanolamine phosphate depending on the substrate. PLC can be divided into non-specific PLC and phosphoinositide-specific PLC (PI-PLC) according to the different substrates. NPC can hydrolyze PC, PE, PS, PG and PA to produce DAG and a head with a phosphate group. Although NPC does not have the C2, X, Y, EF and other domains of the PLC family genes, it still contains a phosphatase domain that can hydrolyze phospholipids, so it is classified as a subfamily in the PLC family; the phospholipase family Another member, PI-PLC, refers to an important regulatory enzyme in the signal. It can hydrolyze phosphatidylinositol to produce DAG and inositol phosphates, such as Inositol bisphosphate (IP2) and Inositol triphosphate (IP3). The function of PI-PLC has been studied very clearly in animals. The PLC contained in animals can be divided into 6 categories and 13 types, namely PLCβ1-4, PLCγ1-2, PLCδ1-5, PLCε, PLCζ and PLCη1-2. In animals, DAG can activate protein kinase C, and IP3 can enter the cytosol to control the release of calcium ions in the endoplasmic reticulum. Compared with PLCs in animals, PLCs in plants lack the PH domain, and the structure is similar to PLCζ in animals (Figure 2). 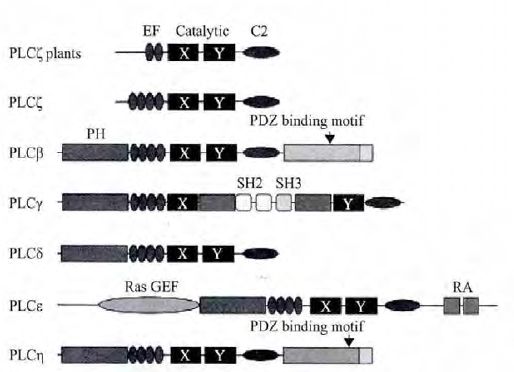 Both NPC and PI-PLC in PLC play a very important role in signal transduction. NPC can hydrolyze phospholipids to form a molecular DAG and a head containing phosphate groups. As an important second messenger molecule, DAG has been very thorough in animal research. Its main function is to activate protein kinase C (PKC) to activate a series of signaling cascade pathways. The latest research results show that NPC4 mutation inhibits ABA-induced PA production, indicating that part of the PA in the ABA signaling system is derived from DAG produced by NPC4 hydrolysis. Whether NPC can adjust the amount of PA through DAG needs more experimental confirmation. PI-PLC is a typical PLC, and most PLCs in animals and plants are PI-PLC. As early as 1983, it has been confirmed that IP3 can promote the release of calcium ions stored in the endoplasmic reticulum. This result was published in Nature. Many subsequent studies in different organizations have confirmed the results of this experiment. IP3 is also considered to be the second messenger that promotes calcium ion release. The IP3/Ca<sup>2+</sup> signaling system can participate in the regulation of many physiological processes in cells. It can directly produce calcium ions, and can also produce calcium ions through other signal systems. IP2 and IP3 can be converted to IP6 in the body, and then induce the release of calcium ions. As another product of PLC, the main target protein of DAG in animals is protein kinase C. It has been reported that the activity of PKC in the sperm of mouse eggs is higher than that of other tissues. 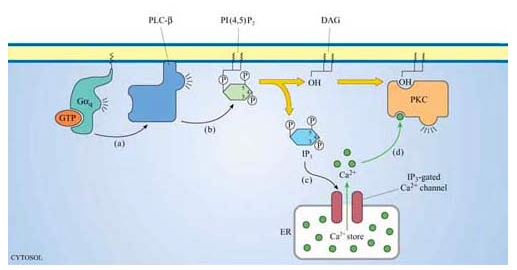 Figure 4. Both products of PLC result in the activation of protein kinase C. (From open.edu)