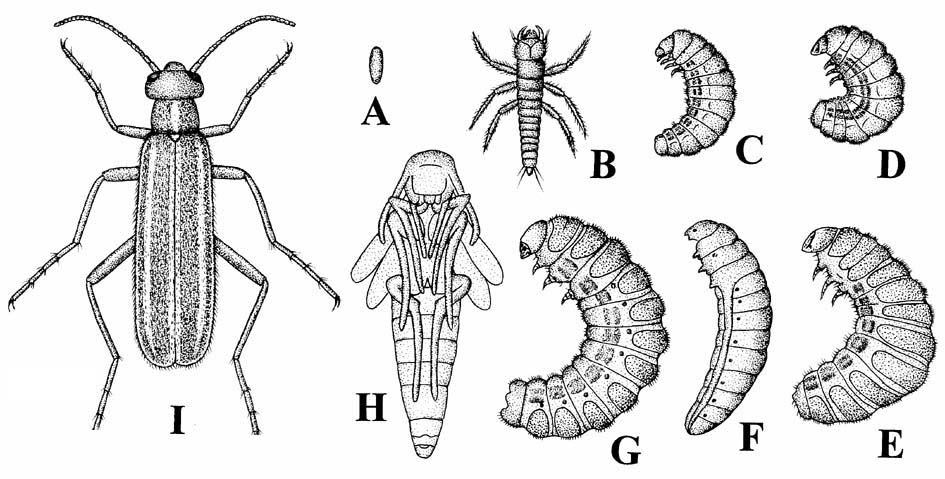 Metamorphosis is an important phenomenon in the growth and development of insects. According to whether there is a pupal stage during development, most insects can be divided into two categories: complete metamorphosis and incomplete metamorphosis. Completely metamorphic insects go through four stages of egg, larva, pupae and adult life. The larvae of these insects differ greatly from the adults in appearance, such as caterpillars and butterflies or pupae and beetles. Completely metamorphic insects are considered to be the most highly evolved group of insects and the most diverse. Incompletely metamorphic insects go through three stages of eggs, nymphs and adults throughout their lives. Their larvae are generally not much different from adults in appearance, but they are usually slightly smaller and have no wings. The larvae of incomplete metamorphic insects are also called nymphs that live on land, and the larvae that live in water. Locust nymphs are called locust pupae. In addition, there is another class of insects that do not have obvious metamorphosis during development. They are primitive species in the class Insecta. They do not have wings and belong to the class insecta wingless subclass. There are very few species of this kind of insects, and what you usually see may be clothing fish (bookworms) living in book boxes or suitcases. Compared with the above two kinds of metamorphic development, the development of this type of insect is also called invariant or epimorphic.

Other invertebrates have a very special larval stage, and the larvae are very different from adults. They can develop into adults (perverted development) after morphological and physiological changes, such as coelenterates, flat animals, molluscs, links Many species of animals, arthropods, and echinoderms. Among them, the arthropod insects are the most special. After hatching from eggs, they pass through nymphs (locusts) or juveniles (dragonfly) to adults. In this process, nymphs or juveniles undergo morphological and physiological changes with their molting; there are also many larvae of insects (mosquitoes, flies, butterflies, moths, beetles) that need to pass through the pupal stage to emerge into adults. Another example is vertebrate amphibian frogs. After hatching from eggs, they have to pass through the pupal stage to reach adults. The abnormal development of tadpoles reflects that tailless amphibians may have evolved from tailed amphibians. In fact, the larvae of these abnormally developed invertebrates are also embryos, and embryonic development and post-embryonic development occur simultaneously.