It is a type of unsaturated fatty acid with physiological activity. It is widely distributed in various tissues and body fluids of the body. It was first extracted from human semen. It can now be prepared by biosynthesis or total synthesis and used as a medicine in clinic. The basic structure of prostaglandin (PG) is prostanoic acid. Natural prostaglandins contain 20 carbon carboxylic acids and hydroxy fatty acids, and their chemical structure and nomenclature are derived from prostanoic acid molecules. 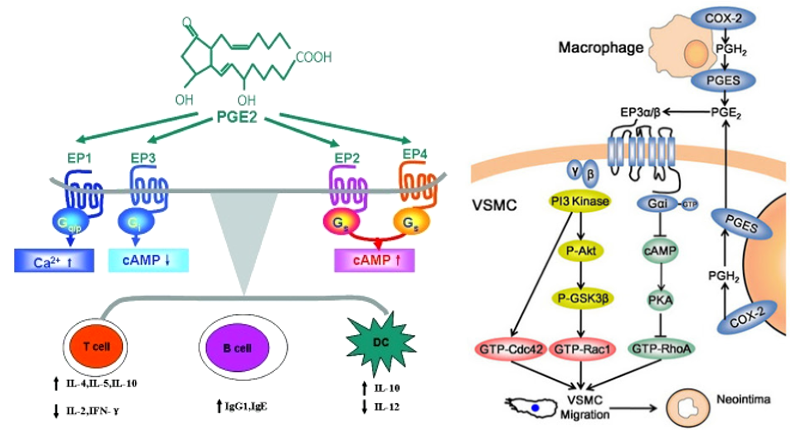 Figure 1. PGE2 regulates the secretion of cytokines by lymphocytes through four different receptors. (From chemicalbook).

Prostaglandins have the following six effects:

(3) Effect on the gastrointestinal tract: it can cause smooth muscle contraction, inhibit gastric acid secretion, prevent strong acids, strong bases, anhydrous alcohol, etc. from eroding the gastric mucosa, and have a cell protective effect. It also has a protective effect on the small intestine, colon, pancreas, etc.

(5) Effect on the respiratory system: Prostaglandin E has the effect of relaxing bronchial smooth muscle, while prostaglandin F is the opposite and is a bronchial contraction agent.

PTGES3 is an enzyme that is encoded by PTGES3 in humans. The protein encoded by this gene is also called p23, which acts as a molecular chaperone and is necessary for the proper functioning of glucocorticoids and other steroid receptors. The gene encodes an enzyme that converts prostaglandin-peroxide H2 (PGH2) to prostaglandin E2 (PGE2). The protein can accompany heat shock protein 90 (HSP90), localize to the response element in DNA and destroy the transcriptional activation complex. Alternative splicing results in multiple transcript variants. The gene has multiple pseudogenes on multiple different chromosomes.

Diseases associated with PTGES3 include primary hypertrophic osteoarthritis. Its related pathways include cytochrome P450-arranged by substrate type and arachidonic acid metabolism. Gene ontology (GO) annotations related to this gene include unfolded protein binding and prostaglandin E synthase activity. The important paralog of this gene is PTGES3L.

PTGR1is a protein coding gene. Related pathways include arachidonic acid metabolism and NRF2 pathway. Gene ontology (GO) annotations related to this gene include oxidoreductase activity and 13-prostaglandin reductase activity. The important paralog of this gene is PTGR2. This gene encodes an enzyme involved in the inactivation of the chemokine leukotriene B4. The encoded protein specifically catalyzes the NADP + -dependent conversion of leukotriene B4 to 12-oxo-leukotriene B4. The pseudogene of this gene was found on chromosome 1. Alternative splicing results in multiple transcript variants.