Ribosome-inactivating proteins (RIPs) are enzymes which depurinate ribosomal RNA (rRNA), thus inhibiting protein synthesis. They are found predominantly in plants, but also in fungi and bacteria.

Ribosome Inactivating Proteins (RIPs; EC 3.2.2.22) irreversibly modify 26 ribosomes through their RNA N-glycosidase activity that depurinates an adenine residue in the conserved alpha sarcin/ricin loop (SRL) of 28S rRNA [1, 2]. Generally, there are mainly two different types of RIPs: type 1 RIPs (RIP 1) and type 2 RIPs (RIP 2). Type 1 RIPs are single chain proteins, whereas type 2 RIPs consist of two polypeptide chains (A- and B-chain) that are usually linked through a disulfide bridge. The A-chain contains the enzymatic function and the B-chain has lectin properties enabling these proteins to bind to galactose residues on the cell surface. This facilitates the A-chain to enter the cell. Beside these different types of RIPs, there was the proposal to categorize an additional group of RIPs as type 3 RIPs including a protein from maize (b-32) and from barley (JIP60). The protein from maize, b-32, is synthesized as an inactive proenzyme, which is activated after the removal of an internal peptide segment obtaining two segments of 16.5 kDa and 8.5 kDa [3] that seem to act together as N-glycosidase. JIP60 consists of an amino-terminal domain resembling type 1 RIPs linked to a carboxyl-terminal domain, which has a similarity to eukaryotic translation initiation factor 4E [4,5]. Due to their different structures, these two proteins cannot be grouped into the classical type 1 RIPs. 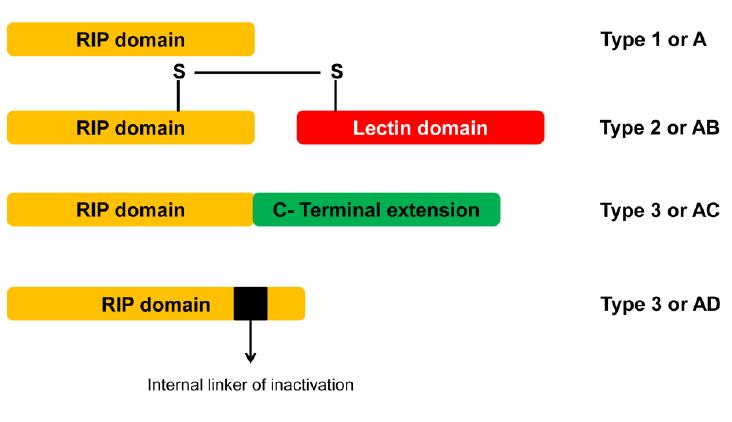 Because of their N-glycosidase activity, ribosome-inactivating proteins inhibit protein synthesis by cleaving a specific adenine residue (A4324) from the 28S ribosomal RNA of the large 60S subunit of rat ribosomes followed by cell death [6].Some studies showed that certain RIPs can remove adenine from DNA and other polynucleotides for which reason they are also known as polynucleotide adenosine glycosidases [7]. In addition, due to the N-glycosidase activity on viral RNA, RIPs have an antiviral effect, which is considered as a physiological function.

What is more, their anticancer, antiviral, embryotoxic, and abortifacient properties have been reported and might be used in medicinal applications. Studies showed that conjugation of RIPs with antibodies or other carriers to form immunotoxins has been found useful to research in neuroscience and anticancer therapy.

Therefore, some advancement in RIPs can be anticipated for future agricultural and medicinal applications. Some attractive possibilities in agriculture include increasing their expression in the transgenic plants without causing damage to the crops; protecting the crops against insects, fungi or viral infections, and conferring stronger to drought and salinity stress. Also, the probability of usage of RIP-based conjugates in medicinal application is also increasing. An even larger number of RIPs is engaged in preclinical studies, indicating the tremendous expected potential of this class of conjugates [8]. With the remarkable technological advancements in recent years, it may be possible to eliminate the undesirable features of RIPs leaving behind the desirable properties. Peptides derived from the RIPs with the activities essentially preserved, if available, may be more useful than the parent RIPs.[10]