In some cases, receptor activation caused by ligand binding to a receptor is directly coupled to the cell's response to the ligand. For example, the neurotransmitter GABA can activate a cell surface receptor that is part of an ion channel. GABA binding to a GABAA receptor on a neuron opens a chloride-selective ion channel that is part of the receptor. GABAA receptor activation allows negatively charged chloride ions to move into the neuron, which inhibits the ability of the neuron to produce action potentials. However, for many cell surface receptors, ligand-receptor interactions are not directly linked to the cell's response. The activated receptor must first interact with other proteins inside the cell before the ultimate physiological effect of the ligand on the cell's behavior is produced. Often, the behavior of a chain of several interacting cell proteins is altered following receptor activation. The entire set of cell changes induced by receptor activation is called a signal transduction mechanism or pathway. 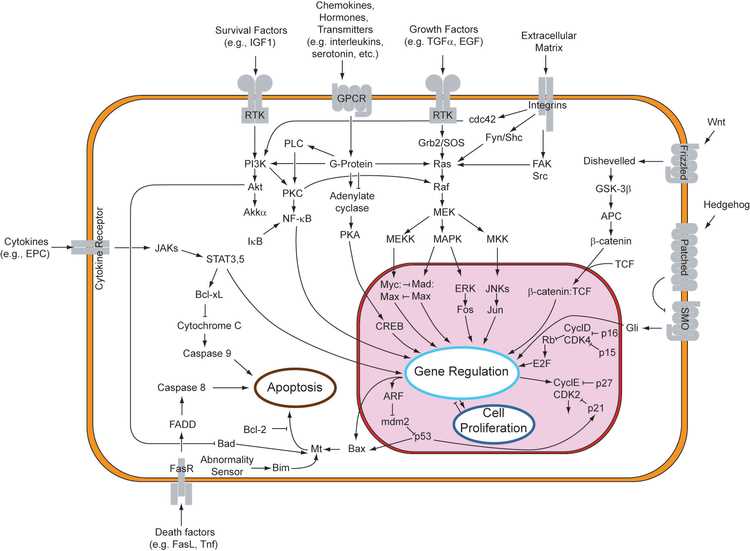 In the case of Notch-mediated signaling, the signal transduction mechanism can be relatively simple. As shown in Figure 1, activation of Notch can cause the Notch protein to be altered by a protease. Part of the Notch protein is released from the cell surface membrane and takes part in gene regulation. Cell signaling research involves studying the spatial and temporal dynamics of both receptors and the components of signaling pathways that are activated by receptors in various cell types.

MAPK/ERK pathway is 1 more complex signal transduction pathway which was shown in Figure 2. This pathway involves changes of protein–protein interactions inside the cell, induced by an external signal. Many growth factors bind to receptors at the cell surface and stimulate cells to progress through the cell cycle and divide. Several of these receptors are kinases that start to phosphorylate themselves and other proteins when binding to a ligand. This phosphorylation can generate a binding site for a different protein and thus induce protein–protein interaction. In Figure 3, the ligand (called epidermal growth factor (EGF) binds to the receptor (called EGFR). This activates the receptor to phosphorylate itself. The phosphorylated receptor binds to an adaptor protein (GRB2), which couples the signal to further downstream signaling processes. For example, one of the signal transduction pathways that are activated is called the mitogen-activated protein kinase (MAPK) pathway. The signal transduction component labeled as "MAPK" in the pathway was originally called "ERK," so the pathway is called the MAPK/ERK pathway. The MAPK protein is an enzyme, a protein kinase that binds a phosphate to a protein of interest (eg, the transcription factor MYC), alters gene transcription, and ultimately alters cell cycle progression. Many cellular proteins are activated downstream of the growth factor receptor (eg, EGFR) that initiates this signal transduction pathway. 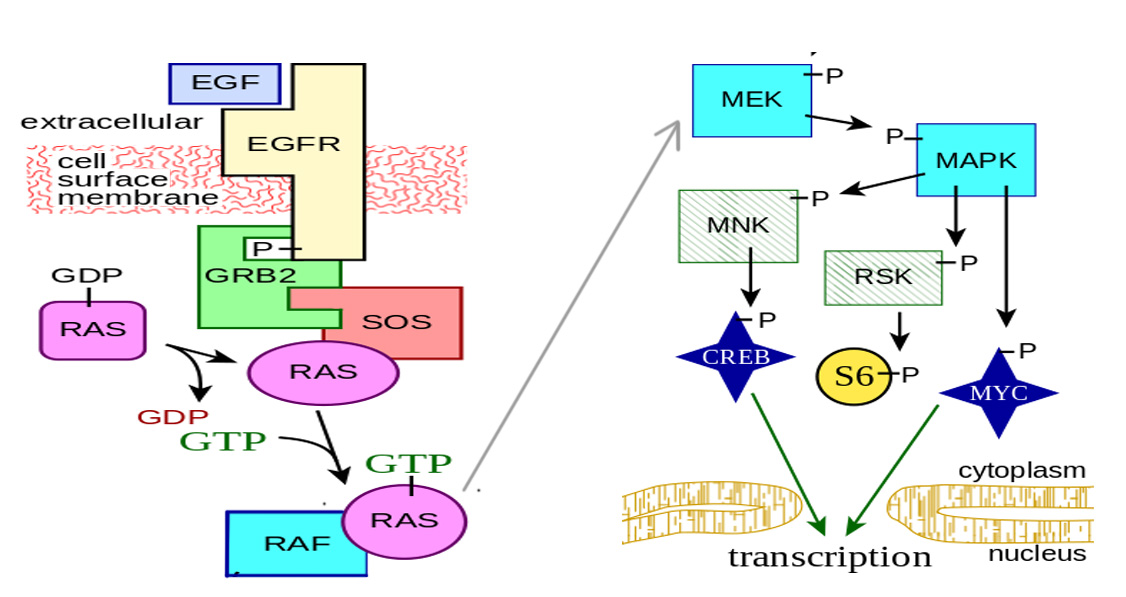 Some signaling transduction pathways respond differently, depending on the amount of signaling received by the cell. For instance, the hedgehog protein activates different genes, depending on the amount of hedgehog protein present. Complex multi-component signal transduction pathways provide opportunities for feedback, signal amplification, and interactions inside one cell between multiple signals and signaling pathways.