Telomeres are small segments of DNA-protein complexes present at the ends of linear chromosomes of eukaryotic cells. Together with telomere-binding proteins, they constitute a special "hat" structure that maintains chromosome integrity and controls cell division cycles. Telomeres, centromeres, and origin of replication are the three major factors that keep chromosomes intact and stable. The length of telomeres reflects the history of cell replication and the potential for replication, and is known as the "mitotic clock" of cell life. 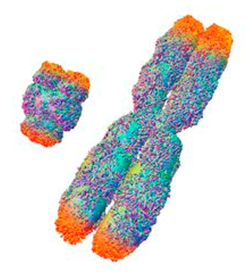 Maintenance of telomere length is a prerequisite for continuous cell division. In cells that thrive or need to maintain their cleavage potential, such as germ cells, stem cells, and most cancer cells (~85%), telomerase is activated, which adds telomere sequences at the ends of telomeres to ensure these cells The stability of the mid-telomere length maintains the ability of the cells to continue to divide. The presence of highly homologous sequences in the subtelomeric region of the chromosome undergoes abnormal homologous recombination during meiosis, resulting in minor deletions, duplications, or translocations of chromosomes in the region, termed a subclonal recombination abnormality in the chromosome. Patients with this disease are mainly characterized by varying degrees of mental retardation, accompanied by growth retardation and deformities of various organs and systems.

There are many aspects of telomere maintenance in cancer, which offer potential opportunities for the development of targeted therapies. The most obvious of these is that telomerase or ALT is involved in the catalytic event of de novo synthesis of telomere DNA, but other changes related to the activation of these mechanisms in cancer cells should also be considered as potential targets.

Many reviews have reported the development of telomerase inhibitors. Telomerase catalyzes the telomere extension reaction through multiple steps, including binding to the substrate, reverse transcription of telomere DNA, and translocation of the enzyme on its extended substrate to continue the extension reaction (this is its continuation Necessary for sex). All of these steps may be inhibited, and inhibitors of the reverse transcription step can target templates such as GRN163L or catalytic subunits. A compound that has been widely used in in vitro studies, BIBR1532, is a non-competitive telomerase inhibitor that appears to inhibit its ability to synthesize

The final steps of the ALT process involve HR and DNA synthesis, which is essential for repairing and replicating DNA in normal cells. Although there may be treatment windows where cancer cells, especially those that have lost p53 function, are more likely to be inhibited by these functions than normal cells, the probability of toxic side effects of this inhibition is high. Many molecular details of ALT remain to be discovered, however, the key step involving telomere juxtaposition (a key step necessary for a telomere to use non-homologous telomeres as a template for replication) involves the following molecules: not expressed in normal somatic cells or Expressed at much lower levels, so it would be a suitable target for the development of ALT inhibitors.