TLR plays a key role in identifying pathogen-related molecules, suggesting that it is related to immune inflammation. TLR can not only eliminate pathogens in the natural immune response, but also effectively establish an acquired immune system through the identification of pathogen-related molecules. In the TLR-mediated cell signaling pathway, the linker molecule TLR / IL-1R domain plays an important role in the immune inflammatory response. It can produce some pro-inflammatory cytokines such as NO, type 1 interferon, etc., and up-regulate co-stimulation Molecular expression. 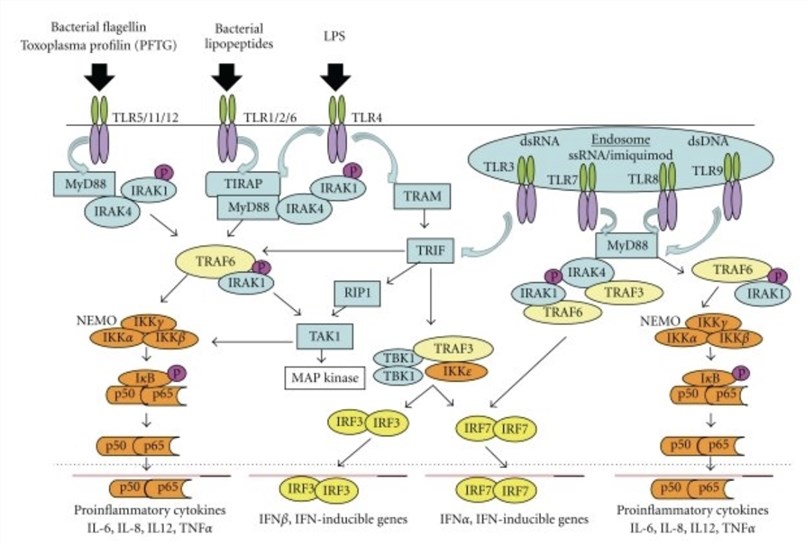 Figure 1. The TLR signaling pathway and downstream effector molecules. Depicted are key TLR molecules, their signaling adaptors and downstream mediators that are essential for TLR signaling and function. The specific molecules in this network that are presently being interrogated as potential therapeutic targets include TLR7/9, MyD88 and IRAK1/4, as discussed in the text. (Zhu J, et al. 2010)

Among TLRs, TLR4 was the first to be identified by genetic methods. C3H / He mutant mice showed low reactivity to lipopolysaccharide (LPS), a cell wall component of Gram-negative bacteria. The mutation is an autosomal recessive inheritance. The gene cloning technique was used to analyze the location of the LPS binding site at the TLR4 gene site. TLR4-deficient mice also showed similar low responsiveness to LPS. C3H / HEJ mutant mice TLR4 cannot activate NF-κB, suggesting that TLR4 in vivo is important for LPS recognition. In addition to LPS as a ligand, bacterial lipoproteins can also be TLR1, TLR2 and TLR6 ligands. TLR1 mainly recognizes lipoprotein carboxyl-terminal and lipoprotein A on the surface of Borrelia helix. 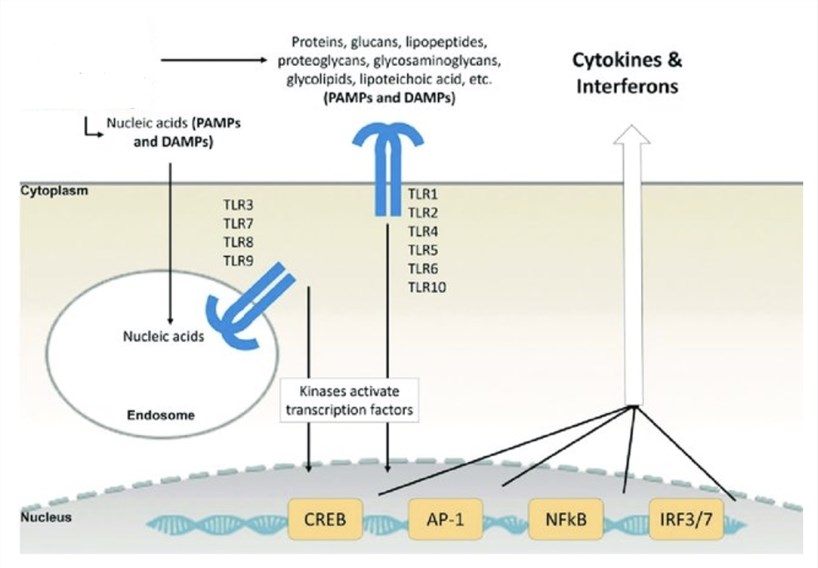 Nucleotides derived from bacteria and viruses or other pathogens can stimulate the production of proinflammatory cytokines and type 1 interferon. Among them, BCG DNA stimulates human peripheral blood leukocytes, which can promote the secretion of type 1 interferon and type 2 interferon with antitumor activity and immune induction. RNA is also a ligand for TLR. Single-stranded RNAs (ssRNAs) rich in guanylate and uridine urids or influenza viruses are TLR7 ligands. TLR11 recognizes the protofilament protein of soluble Toxoplasma gondii, which can induce the production of interleukin-12, and TLR11 prevents parasites from invading host cells and plays an important role. Because TLR11-deficient mice are highly susceptible to pyelonephritis, TLR11 may also recognize pathogens in the urethra.

After TLR signal activation, it causes increased expression of NF-κB and MAPK, and regulates gene expression of various immune and inflammatory mediators. In the TLR / NF-κB signaling pathway, the cells are not stimulated, and the NF-κB dimer binds to one of the three inhibitors in the cytoplasm (IκBa, IκBβ, IκBε) in an inactive state. Once bound to the TLR ligand, NF-κB is activated by degrading NF-κB to bind to nuclear DNA. IκBs are first phosphorylated by IκBs kinase (IKK) in two conserved serine residues. IKK is composed of one regulatory subunit IKK-γ and two catalytic subunits IKK-α and IKKβ. IκBs are then degraded by proteases under the catalysis of the SCF-E3 ubiquitinase complex, and the activated NF-κB is translocated into the nucleus to bind to the relevant DNA motifs to induce transcription of the target gene.

IKK is regulated by various MAP3K, including TAK1, MEKK3, Tpl2, and ASK1. Among them, the molecular role of TAK1 in TLR / IL-1R-mediated IKK activation is the most thoroughly studied. In the study of IKK activation in vitro, TAK1 and IKK combined to form complex TAB1, TAB2, and TAB3 binding proteins. The formation of activated TAK1-TABs complex is not due to protein phosphorylation, but by ubiquitination related to lysine 63 (K63). In contrast, unlike K48 ubiquitination-mediated protease-dependent protein degradation, K63 ubiquitination, in addition to activated TAK1-t TABs complex formation, is also involved in cells. 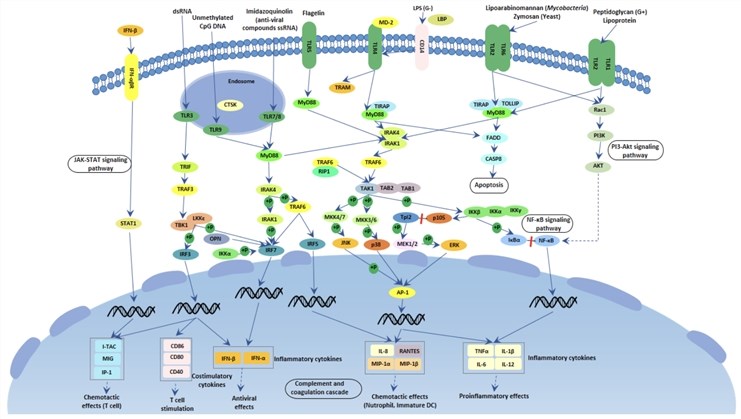