Figure 1. Structure of the SUMO1 protein.

SUMO is a class of proteins that are highly conserved during species evolution. In lower eukaryotes (yeast, nematode, and fruit fly), there is only one SUMO gene; in vertebrates, there are at least three SUMO genes; in mammals, four SUMO genes have been found, SUMO-1, -2, -3 and -4. Human SUMO-1 has only 18% similarity to the amino acid sequence of ubiquitin, but their tertiary structure is very similar. Interestingly, the amino terminus (N-terminus) of SUMO-1 has a 21 amino acid extension and is absent in ubiquitin. In addition, the charge distribution on the SUMO protein surface is also significantly different from that of ubiquitin. The amino acid sequence of SUMO-2 and SUMO-3 is 97% similar, 87% similar to SUMO-4, and only 50% similar to SUMO-1. SUMO-1, -2 and -3 are expressed in most tissues, while SUMO-4 is mainly expressed in kidney, lymph nodes and spleen.

There are four confirmed SUMO subtypes in humans. SUMO-1, SUMO-2, SUMO-3 and SUMO-4. SUMO-2/3 shows a high degree of similarity to each other, unlike SUMO-1. SUMO-4 is similar to SUMO-2/3 but has a proline at position 90 instead of glutamine. As a result, SUMO-4 is not processed and conjugated under normal conditions, but can be used to modify conditions such as protein-starvation under pressure. During mitosis, SUMO-2/3 localizes to centromeres and concentrated chromosomes, while SUMO-1 localizes to the middle region of the mitotic spindle and spindle, indicating that SUMO paralogs regulate different mammalian cells. The process of mitosis. One of the major SUMO coupling products associated with mitotic chromosomes is produced by SUMO-2/3 coupling of topoisomerase II, which was specifically modified by SUMO-2/3 during mitosis. The SUMO-2/3 modification appears to be particularly involved in the stress response. SUMO-1 and SUMO-2/3 can form a mixed chain, however, since SUMO-1 does not contain an internal SUMO consensus site found in SUMO-2/3, these multiple SUMO chains can be terminated. The serine 2 of SUMO-1 is phosphorylated, and the concept of "modification modifier" has been proposed.

Similar to ubiquitination, SUMO's modification of the substrate protein is also a multi-step enzymatic reaction. The SUMO precursor excises several amino acids at the carboxy terminus (C-terminus) under the action of SUTI-specific protease (SENP), thereby exposing the diglycine residue and becoming a mature SUMO. First, the C-terminal glycine of mature SUMO is linked to the cysteine ​​residue of the SULO-activating enzyme via a sulfatide bond. The activation process requires the participation of ATP. The E1 activating enzyme is a heterodimer composed of two subunits, SAE1 (called Uba2 in yeast) and SAE2 (Aos1), in human cells. SUMO is then transferred to the cysteine ​​residue of the SU2-conjugating enzyme. So far, only one E2 binding enzyme, Ubc9, has been found. Ubc9 directly recognizes the substrate, thereby ultimately coupling SUMO to the lysine residue of the substrate protein via an isopeptide bond. Many substrate proteins contain the SUMO consensus motif ψKxE (ψ represents a hydrophobic amino acid; K is lysine; x represents any amino acid; E is glutamic acid). 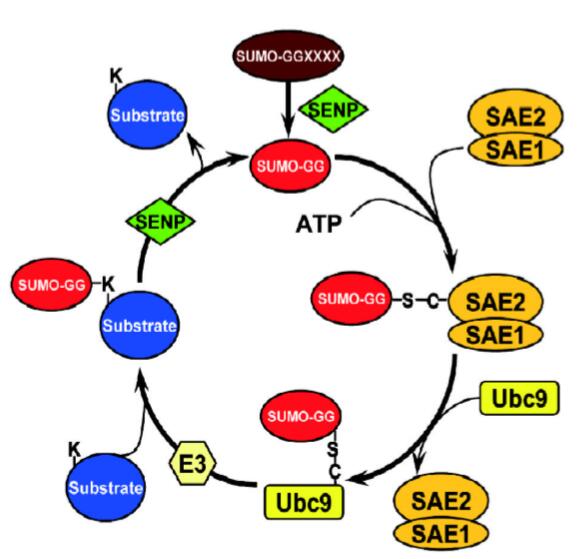 SUMO Modification and Cancer With the deepening of research, more and more results indicate that SUMO modification is closely related to many major human diseases. Through gene chip analysis, SUMO-activating enzyme E1 expression was up-regulated in low-sustaining liver cancer patients; SUMO-binding enzyme E2, Ubc9, was detected in human adenocarcinoma and ovarian cancer cells, and the expression level was increased, and Ubc9 was overexpressed. Promotes the growth of breast cancer cells and the occurrence of tumors, SUMO ligase E3 (PIAS3) is up-regulated in lung cancer, breast cancer, prostate cancer, colon-rectal cancer and brain cancer cells, the expression level of the SUMO1 de-SUMO enzyme was increased in thyroid cancer.