Softening Arteries and Protecting the Heart: the correlation between Cholesterol and Atherosclerosis 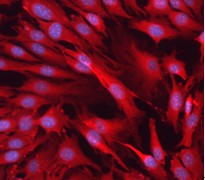 One of the main risk factors for cardiovascular disease is arterial stiffening.Keeping arteries soft and supple might reduce the risk, but how, there seems to be no exactly definite means.

Researchers from the Perelman School of Medicine, University of Pennsylvania, Wistar Institute, and The Children's Hospital of Philadelphia discovered protein apolipoprotein E (apoE) plays a major role in maintaining arterial softness by suppressing the production of a network of connective tissue in the body--the extracellular matrix. ApoE, a component of several lipoproteins, including HDL, the "good" cholesterol, is generally believed to forestall atherosclerosis.

By dividing experimental mice into a regular and a mutant without apoE group, the researchers found obvious differences in their gene expression: the apoE-null mice displaying marked increase in indicators of stiffening – in which the proteins collagen, fibronectin, and lysyl oxidase were in response to stiffening in the aorta and led to severe atherosclerosis. In order to mitigate the atherosclerosis seen in the apoE-null mice, researchers fed them a high-fat diet and administrated them with a lysyl oxidase inhibitor, which softened their arteries. Despite highly elevated cholesterol, the mice showed a marked improvement in their atherosclerosis. The results suggest that the lack of apoE results in arterial stiffness and increasing arterial elasticity by pharmacologic means even with high cholesterol can greatly reduce atherosclerotic disease.The present work suggests that it may be the apoE-containing HDL that confers the main benefit of HDL by promotingarterial softness.

But several recent major studies have questioned the link between HDL and cardiovascular protection. Meanwhile, other research involving cultured cells has indicated that apoE has effects beyond its role in regulating lipid levels as a component of HDL. HDL is a mixture of different molecular components, In addition to its impact on arterial stiffness, it also plays roles in other sides as apoE only accounting for about 6 percent of total HDL.

Although the current study demonstrates how apoE and apoE-containing HDL promote cardiovascular health by maintaining arterial softness, Assoian(the senior author) notes that a practical treatment would likely not target apoE, because it does a lot of other things that you don't want to interfere with. So researchers want to develop something that is really targeting stiffness but not affecting any of the lipid aspects of atherosclerosis that apoE and HDL control.

Their research result was published in the recent issue of Cell Reports. Their work was funded by the National Heart Lung and Blood Institute.