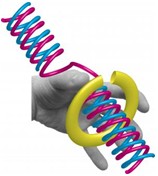 As an illustration, the picture represents a crucial molecular player in the process, by a hand, which is loading the sliding clamp ring onto DNA.

According to the report of eLife on April 2, 2013, the long mysterious mechanism in human DNA replication has been identified for the first time.

Because polymerases and clamp loaders can't bind the sliding clamp at the same time, researchers assumed that clamp loaders latched sliding clamps onto DNA, and then left for some time during DNA replication, returning only to unlatch the clamps after the polymerase left so they could be recycled for further use.

To test the assumption, researchers used a method called Förster resonance energy transfer (FRET), a technique of attaching fluorescent "tags" to human proteins and sections of DNA in order to monitor the interactions between them. With these tags in place, scientists then observed the formation of holoenzymes, which consists of the polymerase itself along with any accessory factors that optimize its activity. Then they found that whenever a sliding clamp is loaded onto a DNA template in the absence of polymerase, the clamp loader quickly removed the clamp so that free clamps did not build up on the DNA. However, whenever a polymerase was present, it captured the sliding clamp and the clamp loader then dissociated from the DNA strand. The team members also found that, during the moments when both the clamp loader and the clamp were bound to the DNA, they were not intimately engaged with each other. Rather, the clamp loader released the closed clamp onto the DNA, allowing an opportunity for the polymerase to capture the clamp, completing the assembly of the holoenzyme. Subsequently, the clamp loader dissociated from DNA.

The research demonstrated that the DNA polymerase holoenzyme in humans consists of only a clamp and a DNA polymerase. The clamp loader is not part of it. It disengages from the DNA after the polymerase binds the clamp.