Origin of the Nieuwkoop Center

In determining how the medullary back lip gets its properties, the main clue comes from the experimental Peter New Science. He and his colleagues in the Netherlands demonstrated that the properties of this newly formed mesoderm are induced by the plant underneath them (speculative endoderm) cells. He removed the equatorial cells from the blastocyst and found that neither the animal cap (hypothetical ectoderm) nor the cap of the plant (the putative endoderm) produced mesodermal tissue. However, when the two caps are reconstituted, the animal cap cells are induced to form mesodermal structures such as the notochord, muscle, kidney cells and blood cells. The polarity of this induction (whether the animal cell is in the middle or the ventral mid-skin) depends on the dorsal-ventral polarity of the endoderm (plant) fragment. The ventral and lateral plant cells (cells closer to the entry side of the sperm) induce ventral (interstitial, blood) and intermediate (muscle, kidney) mesoderm, while the most dorsal plant cells specify the dorsal mesoderm component (torso, notochord) the attributes of the organizer. The backmost plant cell capable of inducing the blastocyst of the organelle is called the Nieuwkoop center.

Molecular biology of the Nieuwkoop Center

In Xenopus laevis, endoderm is capable of inducing mesoderm formation by causing putative mesoderm cells to express the Brachyury (Xbra) gene. The mechanism of this induction is not well understood (see Harland and Gerhart 1997), but the Xbra protein is a transcription factor that activates genes that produce mesodermal-specific proteins. Although all plant cells appear to be able to induce their upper marginal cells to become mesoderm, only the most plant cells on the back can indicate that the marginal cells on the upper edge become organizers. The main candidate for the factor that forms the Nieuwkoop center in these plant cells at the back is beta-catenin. 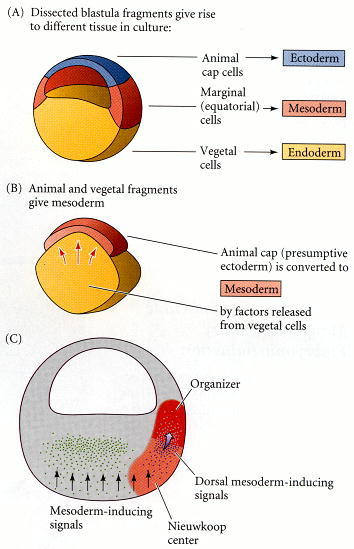 On day 5.5 of mouse embryo development, a cluster of anterior visceral endoderm (AVE) cells specifically expressing the hex gene began to migrate from the distal end to the proximal end. The location of the AVE cell is the sign of the front end. The mammal determines the dorsal ventral surface based on the location of the cell mass within the embryo. The head and tail may be determined during ovulation, and it is not entirely clear how the mammals decide.