The Wnt signaling pathway is a signal transduction pathway of a set of multiple downstream channels that are triggered by binding of the ligand protein Wnt and membrane protein receptor. In this way, extracellular signals are delivered to the cells by activation of the intracellular domain of the cell surface receptor. Wnt is an acronym in the field of genetics and stands for "Wingless / Integrated". The Wnt signaling pathway exhibits two signaling pathways between cells: intercellular communication (paracrine) or autologous cell communication (autocrine). 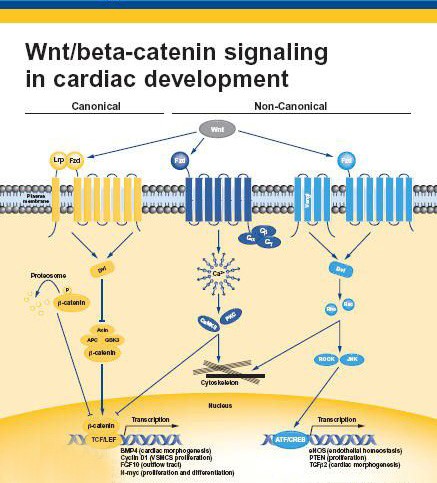 The Wnt signaling pathway is highly genetically conserved among animals and is very similar among different animal species. In 1982, the Wnt gene was first discovered in mouse breast cancer. Since this gene activation was dependent on the insertion of mouse breast cancer-associated viral genes, it was named the Int1 gene. Subsequent studies have shown that the Int1 gene plays an important role in the normal embryonic development of mice, and similar to the Wingless gene function of Drosophila, can control the axial development of the embryo. A large number of studies have since identified the importance of the Int1 gene in embryonic development of the nervous system. Because of the similarity between the two genes and protein function, the researchers combined Wingless with Int1 and named Wnt. The human Wnt gene is located at 12q13. In embryonic development, the important signaling system of Wnt gene regulation is collectively called Wnt pathway.

Member of the pathway 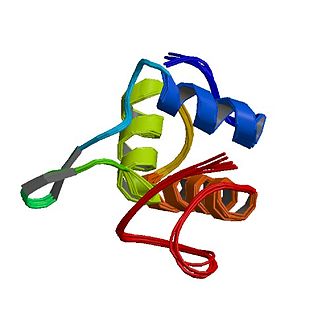 1. Canonical Wnt/β-catenin pathway, which activates the expression of target genes in the nucleus; 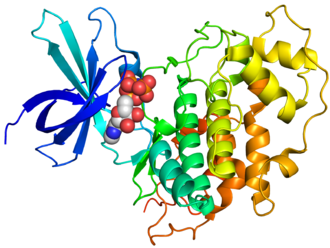 2. Planar cell polarity pathway, which is involved in the activation of JNK and the rearrangement of the cytoskeleton.

4. Adjust the direction of the spindle and the intracellular pathway of asymmetric cell division.

Canonical Wnt Pathway is a Wnt pathway that causes β-catenin to accumulate in the cytoplasm and eventually metastasize to the nucleus, and is a transcriptional coactivator of transcription factors belonging to the TCF/LEF family. Without Wnt, β-catenin does not accumulate in the cytoplasm, as destroying the complex usually degrades it. Such disruptive complexes include the following proteins: toxin, adenomatous polyposis (APC), protein phosphatase 2A (PP2A), glycogen synthase kinase 3 (GSK3), and casein kinase 1 alpha (CK1 alpha). It degrades β-catenin by ubiquitination against β-catenin, which is then sent to the proteasome for digestion. However, once Wnt binds to Fz and LRP5/6, disruption of complex function is disrupted. This is due to Wnt causing translocation of the negative Wnt modulator Axin and disruption of the complex to the plasma membrane. Phosphorylation of other proteins in the disruption complex subsequently binds Axin to the cytoplasmic tail of LRP5/6. The toxin is dephosphorylated and its stability and level are reduced. Then, Dsh is activated by phosphorylation, and its DIX and PDZ domains inhibit the GSK3 activity of the disrupted complex. This allows β-catenin to accumulate and localize to the nucleus, and then induces a cellular response along with the TCF/LEF (T-cell factor/lymphoid enhancer factor) transcription factor by gene transduction. 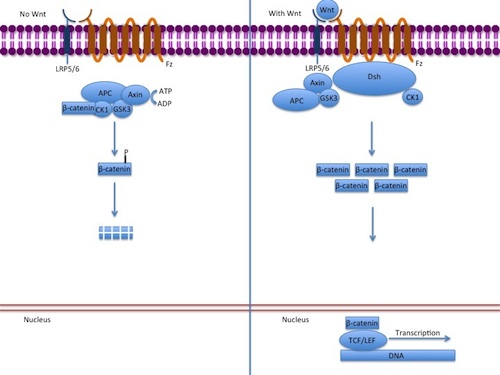