Activation of apoptosis through death receptors is a tightly regulated event, and the death pathway itself is open to soluble or part of membrane-bound bait receptors. The aggregation state of death-inducing ligands is a critical factor, especially when these molecules are used as antitumor recombinant drugs. Whether a tumor is sensitive to such ligands depends on the net abundance of death and bait receptors and the balance between intracellular apoptosis and anti-apoptotic mechanisms. This means that the elimination of tumor cells in vivo by effector arms such as T lymphocytes, natural killer cells, macrophages and dendritic cells depends on both the function of activated lymphoid cells and the genetic characteristics of tumor cells. However, death receptor ligands can be a double-edged sword. When expressed on cytotoxic T lymphocytes, natural killer cells, monocytes, and dendritic cells, they induce apoptosis in many tumor cells, while their expression on tumor cells induces apoptosis in killer cells. In vivo results are affected by the number of infiltrating cells, their activation status, the cytokine pool in the tumor microenvironment, and the ability of the tumor to produce soluble factors that inhibit its cytolytic function.

Death-associated protein kinase (DAPk) is a founding member of the newly classified Ser/Thr kinase family. Its members not only have important homology in their catalytic domains, but also have functions related to cell death. It is recognized that DAPk is a tumor suppressor gene whose expression is lost in a variety of tumor types, which has stimulated interest in the kinase family and generated a large amount of literature on its function, regulation and association with disease. The DAPk family has been linked to several cell death-related signaling pathways, and has also proposed functions other than cell death.Death-related protein kinase 1 is an enzyme encoded by the DAPK1 gene in humans. Death-associated protein kinase 1 is a positive mediator of interferon-γ-induced programmed cell death. DAPK1 encodes a unique 160 kD calmodulin-dependent serine-threonine kinase with eight ankyrin repeats and two putative P-loop consensus sites. It is a candidate for cancer suppression. In melanocytes, the expression of DAPK1 gene may be regulated by MITF. In cell and animal models of human triple receptor negative breast cancer with p53 mutant cancer, a decrease in DAPK1 results in suppression of tumor cell count and volume growth. This has not been proven in actual patients. 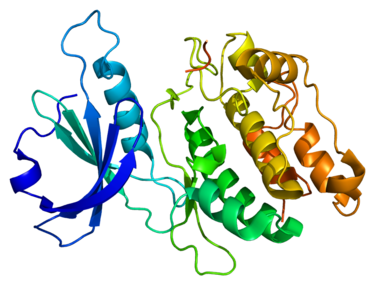 Death-related protein kinase 3 is an enzyme encoded by the DAPK3 gene in humans. When overexpressed in mammalian cells, death-associated protein kinase 3 (DAPK3) induces morphological changes in apoptosis. These results indicate that DAPK3 may play a role in the induction of apoptosis. Unlike most other mammalian genes, murine (rat and mouse) DAPK3 has undergone accelerated evolution and has escaped the strict conservative consensus maintained from fish to human. 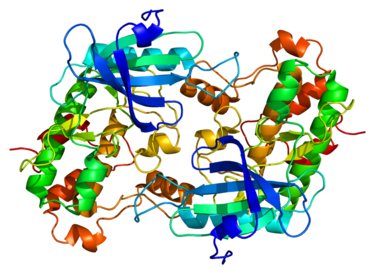 Death-associated protein 6 also known as Daxx is a protein that in humans is encoded by the DAXX gene. Daxx is a protein associated with the death domain, which was first discovered through its cytoplasmic interaction with the classic death receptor Fas. It has been associated with heterochromatin and PML-NBs (promyelocytic leukemia) nucleosomes and is involved in many nuclear processes, including transcription and cell cycle regulation. The gene encodes a multifunctional protein that exists in multiple locations in the nucleus and cytoplasm. Daxx acts as a H3.3-specific histone chaperone, interacting with the H3.3/H4 dimer. It interacts with a variety of proteins, such as the apoptotic antigen Fas, centromere C and the transcription factor erythroblastosis virus E26 oncogene 1 (ETS1). In the nucleus, the encoded protein functions as an effective transcriptional repressor that binds to transcriptinating factors. Inhibition can be reduced by chelating this protein into promyelocytic leukemia nucleosomes or nucleoli. The protein is also associated with G2 phase centromeres. In the cytoplasm, the encoded protein may play a role in regulating apoptosis. The subcellular localization and function of the protein are regulated by posttranslational modifications, including SUMOylation, phosphorylation, and polyubiquitination.