The forkhead box (Fox) family of proteins is a large family of transcription factors with diverse physiological functions ranging from craniopharyngeal development to language acquisition and hearing. The evolutionary conservation of these proteins from yeast to humans and diverse biological functions highlight the importance of these proteins in developmental processes. All members of the Fox family share a conserved 110 amino acid DNA-binding domain that is referred to as the 'forkhead box' or 'winged helix' domain. It is comprised of three a-helices, three p-sheets and two loops, resembling the shape of butterfly wings and giving forkhead proteins an alternate name of 'winged helix proteins. DNA binding of these transcription factors relies on interaction between the highly conserved third helix in the forkhead box and DNA bases within the major groove of DNA. Residues in the two loops of the forkhead box, which display greater amino acid sequence variability, make additional contacts with the DNA-binding element, and these interactions contribute to the binding site selectivity of the different forkhead proteins. Over 100 forkhead genes have been identified to date, and in humans, this family of transcription factors has been subdivided into 19 subgroups (FoxA-FoxS) based on sequence similarity.

Many genes encoding FOX proteins have been identified. For example, the FOXF2 gene encodes a forkhead box F2, which is one of many human homologues of the fruit fly Drosophila transcription factor forkhead. FOXF2 is expressed in the lungs and placenta. Some FOX genes are downstream targets of the hedgehog signaling pathway and play a role in the development of basal cell carcinoma. Class O members regulate metabolism, cell proliferation, stress tolerance, and possible lifespan. FoxO activity is controlled by post-translational modifications, including phosphorylation, acetylation, and ubiquitination.

How are they regulated?

FOXO proteins are tightly regulated to ensure that transcription of specifc target genes is responsive to environmental conditions. A major form of regulation is Akt-mediated phosphorylation of FOXO in response to insulin or growth factors. Phosphorylation at three conserved residues results in the export of FOXO factors from the nucleus to the cytoplasm, thereby inhibiting FOXO-dependent transcription. FOXO proteins are also phosphorylated by other protein kinases, including JNK or Mst1, which phosphorylate FOXO under conditions of oxidative stress. This phosphorylation causes the translocation of FOXO from the cytoplasm to the nucleus, thus opposing Akt's action. In addition to being post-translationally modifed by phosphorylation, FOXO proteins also bind to co-activator or co-repressor complexes and become acetylated or deacetylated. For example, the deacetylase SIRT1 increases FOXO DNAbinding ability by deacetylating FOXO in response to oxidative stress. FOXO proteins are also monoubiquitinated under conditions of oxidative stress and this increases transcriptional activity. Finally, FOXO proteins can also be polyubiquitinated and targeted for protein degradation. The unique phosphorylation, acetylation, and ubiquitination status of FOXO under specifc environmental conditions may provide specifcity in the regulation of subsets of FOXO target genes. 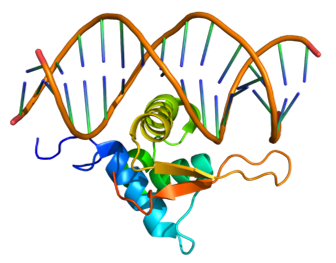 Forehead box protein N1 is a protein encoded by the FOXN1 gene in humans. In naked loci in mice and rats, mutations in the winged spiral transcription factor gene produce a pluripotent phenotype that is hairless and athymic, causing severe damage to the immune system. The gene is orthologous to mouse and rat genes and encodes similar DNA-binding transcription factors that are thought to regulate keratin gene expression. Mutations in this gene have been linked to T cell immune deficiency, congenital skin alopecia, and nail dystrophy. Alternative splicing in the 5'UTR of this gene has been observed. In chicken embryos, the FOXN1 gene is expressed in the developing thymus, paw, and feathers. The expression of FOXN1 in feathers and claws suggests that it may regulate feather growth. In feathers and paws, FOXN1 may regulate keratin expression similar to mammalian orthologs. In thymic epithelial cells, FOXN1 has been shown to regulate and regulate genes related to T cell maturation and antigen presentation.

Forked box protein N3 is a protein encoded by the FOXN3 gene in humans, which is a member of the forked/winged helix transcription factor family. The checkpoint is that eukaryotic DNA damage-induced cell cycle arrests at G1 and G2. Checkpoint inhibitor 1 inhibits multiple yeast checkpoint mutations, including mec1, rad9, rad53, and dun1, by activating a checkpoint pathway independent of MEC1. Alternative splicing was observed at the locus, resulting in different subtypes.