Mesoderm refers to the layer of cells between the ectoderm and endoderm during the embryonic development of the three germ layer animals (the end of the primitive gut endoderm). Including the axial mesoderm (chord), the chordal mesoderm (muscle nodules; osteogenesis, sarcolemma, dermatomes), mesozoic mesoderm (urinary system, reproductive system) and lateral mesoderm (wall layer, visceral layer). Mesoderm develops into the dermis, muscles, bones and other connective tissues and circulatory systems of the body, including heart, blood vessels, bone marrow, lymph nodes, lymphatic vessels and so on. The serosal and mesenteric membranes of the end of the body cavity, the viscera, and the connective tissue and blood vessels in the viscera and smooth muscle.

Mesodermal layers appear between the ectoderm and the inner layer of embryos from the flat animal. The appearance of mesoderm has great significance for the further development of animal body structure and function. On the one hand, the formation of mesoderm reduces the burden on the inner and outer ectoderm, causing a series of differentiation of tissues, organs and systems, which provides the necessary material conditions for the further complex and complete structure of the animal body, so that the flat animal reaches the organ system. Level. On the other hand, due to the formation of mesoderm, the enhancement of metabolism is promoted. For example, the mesoderm forms a complex muscle layer that enhances motor function, plus a bilaterally symmetrical body shape. It is possible for animals to ingest more food on a larger scale. At the same time, due to the muscles on the wall of the digestive tract, the ability of the gastrointestinal tube to squirm is also strengthened. These undoubtedly promote the strengthening of metabolic functions. The flat animal began to have the original excretory system - the original kidney system. Due to the improvement of animal motor function, it often contacts the changing external environment and promotes the further development of the nervous system and sensory organs. In addition, the parenchyma formed by the mesoderm has the function of storing nutrients and moisture. Animals can withstand hunger and to some extent resist drought, so the formation of mesoderm is also one of the basic conditions for animals to evolve from aquatic to terrestrial.

In general, in the third week, a process known as gastrostomy (Figure 2) forms a mesoderm between the endoderm and the ectoderm. This process begins with the formation of primitive streaks on the surface of epidermal cells. The cells of these layers move between epithelial cells and subepithelial cells and begin to spread to the sides and skull. The epithelial cells move toward the original fringes and slide during their invagination. Some of the migrating cells replaced the secondary blasts and formed endoderm, while others migrated between the endoderm and epithelial cells, forming the mesoderm. The remaining cells form the ectoderm. Thereafter, epithelial cells and epithelial cells establish contact with the extraembryonic mesoderm until they cover the yolk sac and amnion. They move to the sides of the string front panel. The notochord cells migrate to the midline to form a notochord. The tendon sheath is the central region of the trunk mesoderm. This forms the notochord, which induces the formation of neural tubes and establishes the anterior and posterior body axes. The notochord extends from the head to the tail below the neural tube. The mesoderm moves to the midline until it covers the notochord, which forms a paraxial mesoderm when the mesodermal cells proliferate. On each side, the mesoderm remains thin and is referred to as the side panel. The middle mesoderm is located between the paraxial mesoderm and the lateral plates. During the 13th to 15th day, extra-embryonic mesoderm, primitive streaks and proliferation of embryonic mesoderm occurred. The notochord process occurs between days 15 and 17. Finally, the development of the notochord and axial tubes occurs between the 17th and 19th days when the current three fossa are formed. 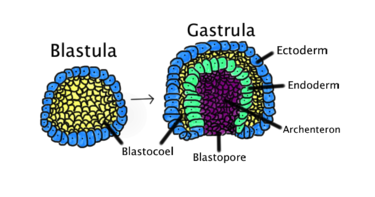 Figure 2. Gastrulation occurs when a blastula, made up of one layer, folds inward and enlarges to create a gastrula.