As a highly conserved signaling pathway in evolution, Wnt signaling pathway plays an important role in many biological processes such as growth, development, metabolism and stem cell maintenance. The loss control of Wnt pathway is closely related to the occurrence of diseases such as cancer, obesity and diabetes. The regulation of classical Wnt pathway mainly revolves around two key regulators, beta-Catenin and TCF, which affect the expression of a large number of target genes related to growth and metabolism at the transcriptional level. 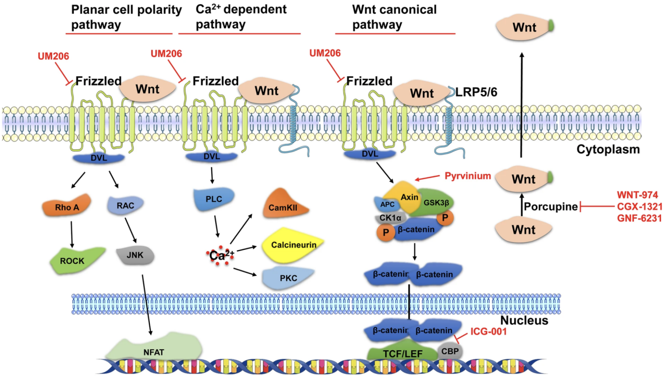 The opening and closing of Wnt signal transduction pathway directly control the expression level of a large number of genes related to growth and metabolism. At the same time, this signal pathway indirectly affects the genes downstream of these pathways through complex interactions with other signal pathways (such as TGFbeta/BMP, Hedgehog, PI3K, RTK, etc.). Therefore, Wnt signal transduction pathway is involved in the regulation of a variety of biological processes, including embryonic growth and morphological development, tissue stability, energy metabolism balance and stem cell maintenance. The disorder of Wnt pathway is closely related to major human diseases. The excessive activation of Wnt pathway is closely related to the occurrence of a variety of cancers (including colon cancer, gastric cancer, breast cancer, etc.), but also can promote the metastasis of cancer cells. In addition, disorders of the Wnt pathway can also lead to metabolic diseases. Wnt signal pathway can inhibit adipocyte differentiation. Therefore, the inhibition of this signal pathway can lead to obesity, which in turn leads to metabolic disorders. Through the investigation of different ethnic groups, it is found that the genetic diversity of TCF7L7 gene, a key regulator in the Wnt pathway, is most closely related to the incidence of type 2 diabetes, but so far there is still a lack of sufficient understanding of its mechanism. In recent years, it has been found that Wnt signaling pathway plays an important role in the maintenance of epidermal stem cells, intestinal stem cells, hematopoietic stem cells, neural stem cells, embryonic stem cells and tumor stem cells.

What is PTC protein? 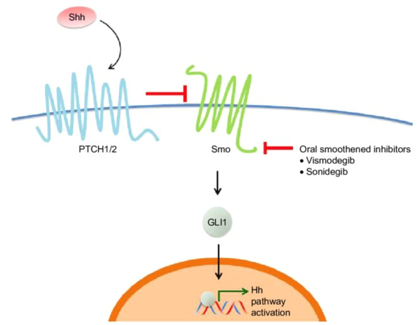 What is the relationship between tumor and tumor?

One of the characteristics of cancer cells is abnormal proliferation and out of control of cell cycle. The regulation of Wnt pathway on stem cell self-renewal is also used by cancer cells. Most colon cancers start with a difference in the Wnt pathway.Often caused by activation, familial colonic polyposis is a hereditary disease. FAP is caused by the inactivation of APC, which leads to the increase of nuclear beta-Catenin level and cell proliferation. With the continuous proliferation of APC mutant cells, other oncogenes or tumor suppressor genes may also mutate, resulting in tumorigenesis. In other colon cancer cases, there are mutations of other genes in Wnt pathway. It is generally believed that the mechanism of colon cancer caused by abnormal activation of Wnt pathway is similar to that of Wnt in maintaining crypt stem cells and proliferative precursor cells. By regulating the expression of cyclinD and c-myc genes, cells remain in a proliferative state similar to precursor cells for a long time, which also provides a window for other carcinogenic mutations. In addition to colon cancer, mutations in the Wnt signaling pathway can also cause others.The occurrence of tumor at the site. For example, most hairy parent tumors are accompanied by mutations in beta-Catenin. Functional deletion mutations of Axin were found in some cases of hepatocellular carcinoma.

As a transmembrane protein receptor downstream of the Hh signal pathway, transmembrane protein receptors are distributed on the target cell membrane. Ptch is encoded by tumor suppressor gene Patched and consists of a single peptide chain of 12 transmembrane regions. It has two functions of binding Hh ligand and inhibiting Smo, and plays a negative role in regulating Hh signaling pathway. Two Ptch homologous genes, Ptch1 and Ptch2, have been found in human genome. In tumor cells, the Hh signal pathway is abnormally activated. It has been found that blocking Hh signal pathway with cyclopamine can promote the apoptosis of SNU16 gastric cancer cells, which is related to the down-regulation of the expression of anti-apoptotic protein Bcl 2. Glioma cells can be stagnated in G0/G1 phase by inhibiting Hh signal pathway. In addition, epithelial-mesenchymal transformation can be induced to promote the invasive ability of pancreatic cancer cells by up-regulating Snail and E-terminal cadherin,Hh signal transduction pathway. In summary, Hh signaling pathway plays a role in tumor proliferation, cell cycle regulation, tumor invasion and metastasis, stem cell stem cell maintenance and so on. 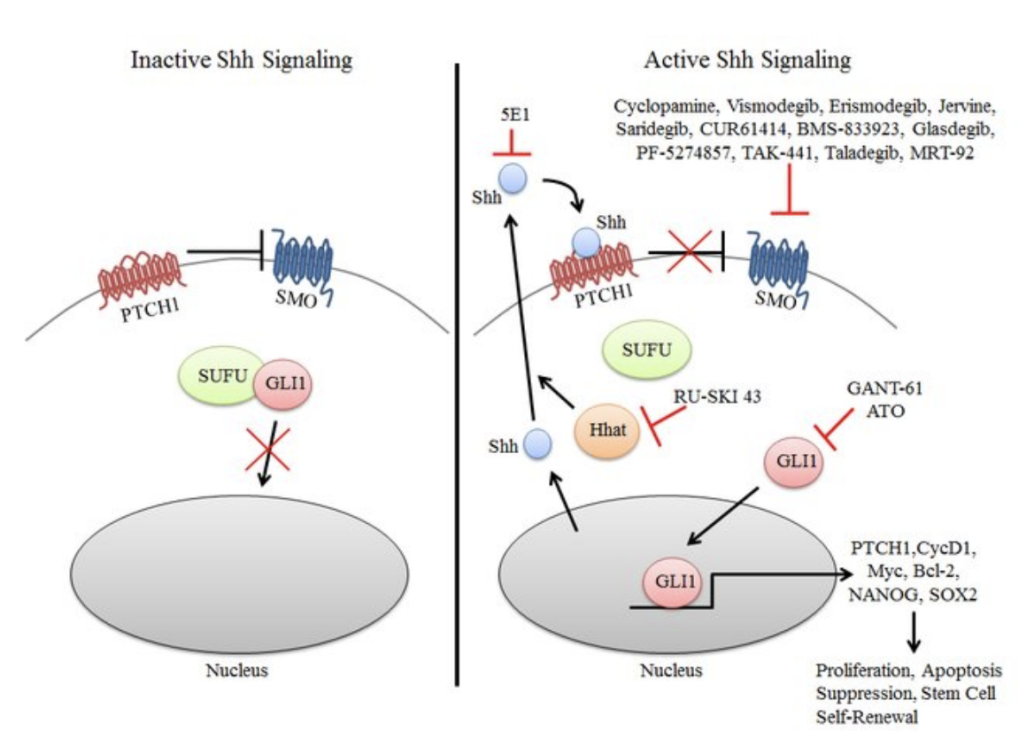 Figure 6. Inhibition of components of the Shh Pathway in cancer. Inactive signaling (left) occurs in the absence of Shh ligand wherein PTCH1 inhibits SMO resulting in GLI1 sequestration in the cytoplasm by SUFU. In the presence of Shh (right), PTCH1 suppression of SMO is abrogated resulting in the nuclear accumulation of GLI1 and activation of target genes that promote several oncogenic properties to tumor cells. (Rimkus T, st al. 2016）

As the main manufacturer of recombinant protein, Creative Biomart provides Drug Resistance Proteins, from a variety of sources, grades and formulations to facilitate your efficient and accurate research content in the experiment.