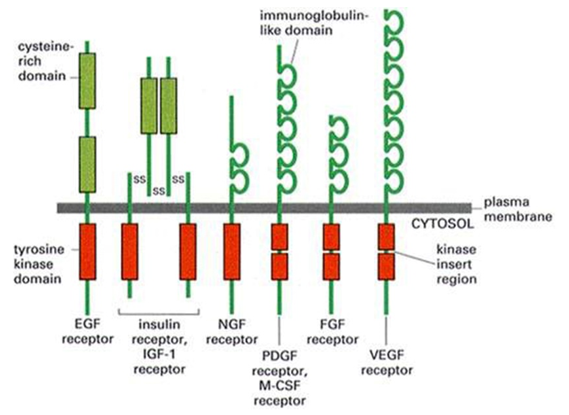 The receptor tyrosine kinase is present as a monomer when it is not bound to a signal molecule, and has no activity; once a signal molecule binds to the extracellular domain of the receptor, two monomeric receptor molecules form on the membrane. A polymer, the tails of the intracellular domains of the two receptors are in contact with one another, activating the function of their protein kinases, Phosphorylation results in the assembly of the tail of the receptor's intracellular domain into a signaling complex. The newly phosphorylated tyrosine site immediately becomes the binding site for intracellular signaling proteins, and there may be 10 to 20 different intracellular signaling proteins that are activated after binding to the receptor phosphorylation site. Signal complexes expand information through several different signal transduction pathways, activate a series of biochemical reactions in cells, or combine different information to cause a comprehensive response (such as cell proliferation).

In many ways, extracellular ligand binding typically causes or stabilizes receptor dimerization. This allows tyrosine in the cytoplasmic portion of each receptor monomer to be transphosphorylated by its chaperone to propagate signals through the plasma membrane. Phosphorylation of specific tyrosine residues within an activating receptor provides a binding site for proteins containing the SH2 domain and the phosphotyrosine binding (PTB) domain. Proteins containing these domains include Src and phospholipase Cγ. Phosphorylation and activation of these two proteins that bind to the receptor triggers a signal transduction pathway. Other proteins that interact with the activating receptor act as adaptor proteins and have no intrinsic enzymatic activity by themselves. These adaptor proteins associate RTK activation with downstream signal transduction pathways, such as the MAP kinase signaling cascade. An important signal transduction pathway contains the tyrosine kinase receptor c-met, which is required for the survival and proliferation of myoblasts during migration during muscle development. Lack of c-met destroys secondary myocyte production and, like LBX1, prevents the formation of limb muscle tissue. This local effect of FGF (fibroblast growth factor) and its RTK receptor is classified as paracrine signaling. Since the RTK receptor phosphorylates multiple tyrosine residues, they can activate a variety of signal transduction pathways.