Hydrophobic molecules: Water-insoluble molecules, such as diacylglycerols and phosphatidylinositols, which bind to membranes and diffuse from the plasma membrane to the membrane space where they can reach and regulate membrane-associated effector proteins.

Hydrophilic molecules: water-soluble molecules, such as cAMP, cGMP, IP3, and Ca2+, that are located within the cytosol.

Gases: nitric oxide (NO), carbon monoxide (CO) and hydrogen sulfide (H2S) which can diffuse both through cytosol and across cellular membranes.

These intracellular messengers have some common characteristics:

They can be synthesized/released in a specific reaction by an enzyme or an ion channel and decomposed again.

Some (such as Ca2+) can be stored in special organelles and released quickly when needed.

Their production/release and destruction can be localized, allowing cells to limit the space and time of signal activity.

IP3, DAG and Ca2+ are the second messengers in the phosphoinositide pathway. This pathway begins with the binding of extracellular major messengers such as epinephrine, acetylcholine and the hormones AGT, GnRH, oxytocin and TRH to their respective receptors. Epinephrine binds to the α1 GTPase protein-coupled receptor (GPCR), which binds to M1 and M2 GPCR.

The primary messenger binds to these receptors resulting in a conformational change in the receptor. The alpha subunit releases GDP with the help of guanine nucleotide exchange factor (GEFS) and binds to GTP, resulting in dissociation and subsequent activation of the subunit. Activated alpha subunit activates phospholipase C, phosphatase C hydrolyzes membrane-bound phosphatidylinositol-4,4-diphosphate (PIP2), resulting in the formation of second messenger diacylglycerol (DAG) and inositol-1,4,5-triphosphate (IP3). IP3 binds to the calcium pump on the endoplasmic reticulum membrane and transports another second messenger, Ca2+, into the cytoplasm. Ca2+ eventually binds to many proteins and activates a range of enzymatic pathways. 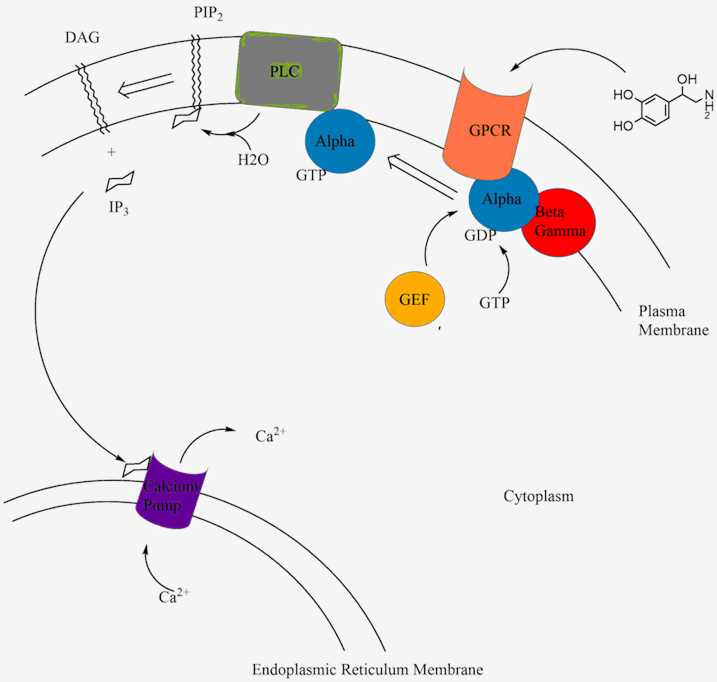