During mitosis, the cell must accurately partition its replicated chromosomes into two daughter cells, a task performed by a microtubule-based machine called the mitotic spindle. In cell biology, the spindle apparatus refers to the cytoskeletal structure of eukaryotic cells that forms during cell division to separate sister chromatids between daughter cells. It is referred to as the mitotic spindle during mitosis or the meiotic spindle during meiosis. Besides chromosomes, the spindle apparatus is composed of hundreds of proteins. Microtubules comprise the most abundant components of the machinery. 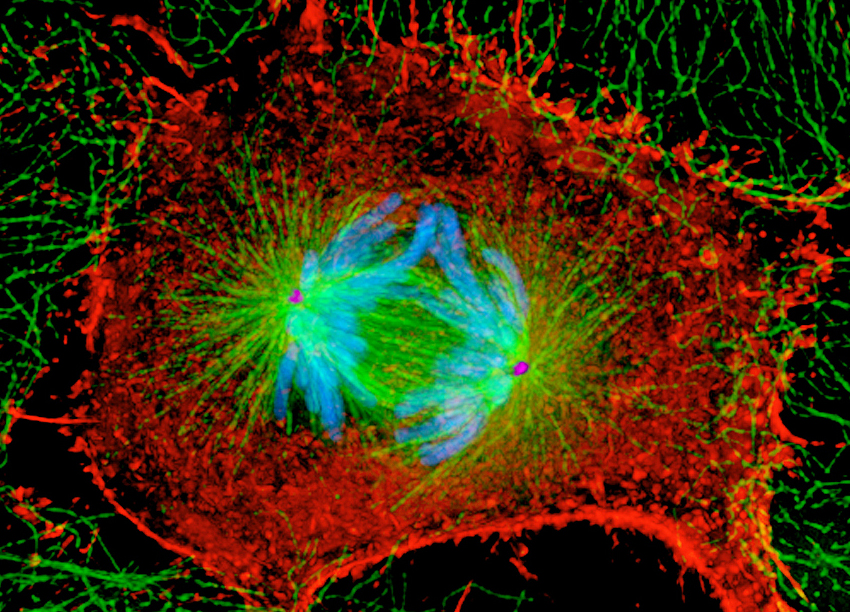 The interphase microtubule network disassembles and the spindle sets up at the onset of mitosis during prophase. Depending on the cell type, the pathway of spindle assembly differs, while assembled spindles share common structural features in all cases. The faster-growing plus ends interact with chromosomes in the spindle equator, creating the typical fusiform shape at metaphase, while the slow-growing minus ends of microtubules are focused into two poles. Interaction of microtubules with kinetochores is a prerequisite for proper chromosome alignment at the metaphase plate and for segregation to opposite poles in anaphase. Attachment of microtubules to chromosomes is mediated by kinetochores, which actively monitor spindle formation and prevent premature anaphase onset. Microtubule polymerization and depolymerization dynamic drive chromosome congression. Depolymerization of microtubules generates tension at kinetochores; bipolar attachment of sister kinetochores to microtubules emanating from opposite cell poles couples opposing tension forces, aligning chromosomes at the cell equator and poising them for segregation to daughter cells. Once every chromosome is bi-oriented, anaphase commences and cohesin, which couples sister chromatids, is severed, permitting the transit of the sister chromatids to opposite poles.

The spindle also functions to define the position of the cleavage plane that divides the cell into two at cytokinesis by signaling to the cell cortex. Error separation of chromosomes results in aneuploidy, which can lead to genomic instability and cancer. To avoid errors, the mitotic spindle has a built-in "checkpoint" mechanism that monitors whether all chromosomes are properly attached to the spindle before allowing the cell to proceed into anaphase. Thus, the mitotic spindle can be viewed as a sophisticated macromolecular machine that governs the process of cell division. 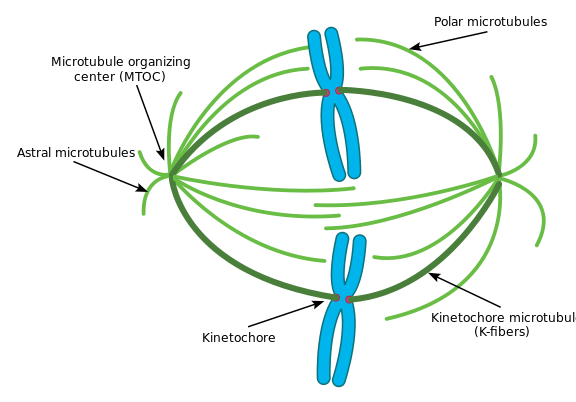 The cellular spindle apparatus includes the spindle microtubules, associated proteins, which include kinesin and dynein molecular motors, condensed chromosomes, and any centrosomes or asters that may be present at the spindle poles depending on the cell type. The primary structure of spindle consists of microtubules, polarized filaments composed of α/β-tubulin heterodimers arranged in a head-to-tail configuration within protofilaments. Thirteen parallel protofilaments associate laterally to form the hollow cylindrical microtubule structure. Thirteen parallel protofilaments associate laterally to form the hollow cylindrical microtubule structure. The microtubules have two fundamental properties: dynamic properties and structural polarity. The dynamic properties of microtubules allow them to grow and shrink by addition or loss of tubulin dimers at the ends of the polymer. Microtubule polarity is another property important for spindle morphogenesis. Because tubulin subunits are asymmetric, the minus and plus ends of the microtubules have different dynamic properties, and a structural polarity in the microtubule lattice is created. Microtubule-based motor proteins, including dynein and a large set of kinesin-like proteins, recognize the surface lattice of microtubules, read their polarity, and move their cargo accordingly.

The spindle apparatus is vaguely ellipsoid in cross section and tapers at the ends. At the pointed ends, microtubules are nucleated by the centrosomes in most animal cells, known as spindle poles. In the wide middle portion, antiparallel microtubules are bundled by kinesins, known as the spindle midzone. Acentrosomal or anastral spindles lack centrosomes or asters at the spindle poles, respectively, and occur for example during female meiosis in most animals. In fungi, spindles form between spindle pole bodies embedded in the nuclear envelope, which does not break down during mitosis.

In most vertebrate cells, "search and capture" appears as the predominant mechanism by which chromosomes become properly attached to and aligned on the spindle. In this model, microtubules are nucleated at microtubule organizing centers and undergo rapid growth and catastrophe to 'search' the cytoplasm for kinetochores, until they are captured and stabilized by one of the sister kinetochores on a chromosome. Once they bind a kinetochore, they are stabilized and their dynamics are reduced. These chromosomes are termed "mono-oriented" because they are attached to a single spindle pole and oscillate back until the chromosome becomes bi-oriented through interaction with microtubules from the opposite pole. This second attachment further stabilizes kinetochore attachment to the mitotic spindle. Once bi-oriented, chromosomes then rapidly move toward the spindle equator where they continue to oscillate until anaphase onset releases cohesion of the sister chromatids.

In contrast to the search-and-capture mechanism in which centrosomes largely dictate the organization of the mitotic spindle, this model proposes that microtubules are nucleated near chromosomes and spontaneously assemble into anti-parallel bundles and adopt a spindle-like structure. It was originally thought that spindle self-assembly operated only in female meiosis or other systems lacking centrosomes. However, more recent studies show that centrosome-driven and centrosome-independent mechanisms are not mutually exclusive. For example, laser ablation of centrosomes in vertebrate cells does not inhibit spindle assembly or chromosome segregation, indicating that somatic cells can self-assemble spindles when the normally dominant centrosome is absent.

Importantly, both "search and capture" and "self-assembly" mechanisms can lead to metaphase chromosome alignment, since forces on the chromosomes and kinetochores are balanced at the mid-plane of the spindle. Two unifying mechanisms appear to operate in all systems. One is the role of microtubule-based motor proteins, including cytoplasmic dynein and at least seven different kinesins, which are essential to organize microtubules into a bipolar array, even in the presence of centrosomes that provide a strong bipolar cue. The second general principle is the stabilizing force of chromosomes, due to bioriented kinetochore–microtubule interactions and the biochemical activities of chromosome arms.

The spindle is a huge and complex organelle. Because of conventional genetic and biochemical approaches, as well as large-scale proteomic analyses, we now have a sizable "parts list" for the vertebrate spindle. In addition, with the advent of RNAi technology and systems level approaches, many factors important for mitosis have been identified. In the future, it will be essential for us to take the "parts list" and the functional genomic data and use them to converge on a better molecular understanding of mitosis. Research in the past 100 years has uncovered a wealth of information regarding the mitotic spindle and its function. We expect that in the next century we will determine the molecular roots of the incredible process of mitosis.