The vitamin D receptor (VDR), also known as the calcitriol receptor and also known as NR1I1 (nuclear receptor subfamily 1, group I, member 1), could be a member of the nuclear receptor family of transcription factors. Calcitriol, the active type of vitamin D, binds to VDR, which forms a heterodimer with the retinoid-X receptor. It then binds to a hormone response element on the DNA, leading to expression or transrepression of a particular gene product. The VDR not only regulates transcriptional responses but also involved in microRNA-directed post transcriptional mechanisms. In humans, the vitamin D receptor is encoded by the VDR gene. 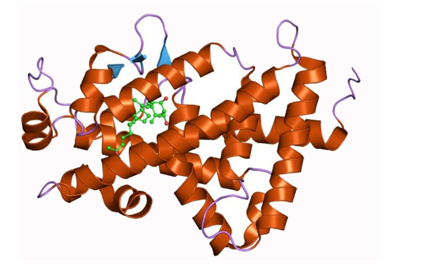 This gene encodes a nuclear hormone receptor for vitamin D3. The receptor also can act as a receptor for secondary bile acid bile acid. This receptor belongs to the family of trans-acting transcriptional regulators and presents similarity in sequence to steroid and thyroid hormone receptors. Downstream targets of this nuclear hormone receptor are involved principally in mineral metabolism though the receptor regulates a variety of other metabolic pathways, such as those involved in the immune response and cancer. Mutations in this gene are associated with type II vitamin D-resistant rickets. A single nucleotide polymorphism in the initiation sequence leads to an alternate translation start site three codons downstream. various splicing leading to multiple transcript variants encoding the same protein. The vitamin D receptor plays a very important role in control the hair cycle. Loss of VDR is related to hair loss in experimental animals. Experimental studies have shown that the unliganded VDR interacts with regulative regions in cWnt (wnt signaling pathway) and sonic hedgehog target genes and is necessary for the induction of these pathways throughout the postnatal hair cycle. These studies have displayed novel actions of the unliganded VDR in control the post-morphogenic hair cycle. Glucocorticoids are known to decrease expression of VDR, which is expressed in most tissues of the body and regulate intestinal transport of calcium, iron and other minerals.

Vitamin D could be a cluster of fat-soluble secosteroids responsible for increasing intestinal absorption of calcium, magnesium, and phosphate, and multiple other biological effects. In humans, foremost vital compounds during this cluster are vitamin D3 (Figure 2), also referred to as cholecalciferol and vitamin D2 (ergocalciferol). Cholecalciferol and ergocalciferol can be ingested from the diet and from supplements. Only a few foods contain vitamin D. The main natural source of vitamins is the synthesis of cholecalciferol in the skin from cholesterol by chemical reactions that rely on sunlight (especially UVB radiation). Dietary recommendations typically assume that all of a person's vitamin D is taken by mouth, as sun exposure in the population is variable and recommendations about the amount of sun exposure that is safe are uncertain in view of the skin cancer risk. 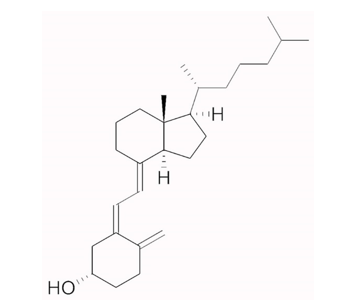 Several forms (vitamers) of vitamin D exist. The two main forms are vitamin D2 or ergocalciferol, vitamin D3 or cholecalciferol; vitamin D without a subscript refers to D2 or D3 or both. These are known collectively as calciferol. Vitamin D2 was chemically characterized in 1931. In 1935, the chemical structure of vitamin D3 was established and tested to result from the ultraviolet irradiation of 7-dehydrocholesterol. Chemically, the varied kinds of vitamin D are secosteroids, i.e., steroids in which one of the bonds in the steroid rings is broken. The structural difference between vitamin D2 and vitamin D3 is that the side chain of D2 has a double bond between carbons 22 and 23, and a methyl group on carbon 24.