The tumor necrosis factor superfamily is a type II transmembrane protein. It consists of 19 members. Its C-terminus of the extracellular region contains a homologous sequence of about 150 amino acids. It consists of 10 β-sheet chains and folds into a spring-like space structure. The site where the corresponding receptor binds. Most members play a role in binding to the corresponding receptors in the form of trimers, and have a wide range of biological functions. 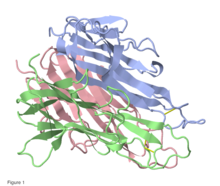 TNF is mainly produced as a 233 amino acid type II transmembrane protein arranged in stable homotrimers. Soluble homotrimeric cytokines (sTNF) are released from membrane-integrated forms by metalloproteinase TNFα converting enzyme (TACE, also known as ADAM17) through proteolytic cleavage. The soluble 51 kDa trimer sTNF tends to dissociate at concentrations below nanomolar, thereby losing its biological activity. Human TNFα is secreted in a triangular pyramid shape and weighs about 17-kDa. Both secreted and membrane-bound forms are biologically active, although the specific function of each form is controversial. However, both forms do have overlapping and distinct biological activities. The structure of normal TNFα and human TNF is different. The 17 kilodalton (kDa) TNF precursor (185 amino acids in length) consists of two anti-parallel β-sheets with anti-parallel β chains, which is typical of the TNF family Characteristics and found in viral capsid proteins.

Lymphotoxin-alpha (LT-α) or tumor necrosis factor-beta (TNF-β) is a protein encoded by the LTA gene in humans. LT-α has important effects on the maintenance of the immune system, including the development of secondary lymphoid organs. Lack of LT-α can cause development of the gastrointestinal tract, prevent the development of Peyer's lymph nodes, and cause spleen disorders. LT-α is a hematopoietic cell line with anti-proliferative activity and can cause cell destruction in tumor cell lines. As a cytotoxic protein, LT-α plays many important roles in immune regulation according to its secreted form. Unlike other members of the TNF superfamily, LT-α exists only as a soluble homotrimer, and when found on the cell surface, forms only heterotrimers with LTβ. 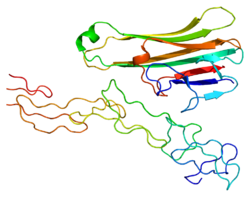 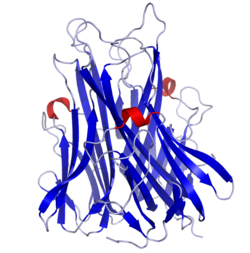 Tumor necrosis factor ligand superfamily member 18 is a protein encoded by the TNFSF18 gene in humans. The protein encoded by this gene is a cytokine and belongs to the tumor necrosis factor (TNF) ligand family. This cytokine is a ligand for the receptors TNFRSF18/AITR/GITR. It has been shown to regulate T lymphocyte survival in peripheral tissues. This cytokine was also found to be expressed in endothelial cells and was thought to be important for the interaction between T lymphocytes and endothelial cells. 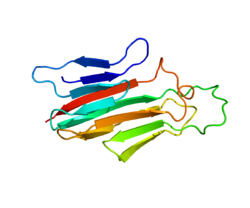 Ecdysone A (EDA) is a protein encoded by the EDA gene in the human body. Ecdysentin A is a transmembrane protein of the TNF family and plays an important role in the development of ectodermal tissues such as human skin. It is recognized by the exoplasmin A receptor.

Figure 5. Structure of the EDA protein.