Chemokines: A class of small cytokines or signaling proteins secreted by cells. Because they have the ability to induce directed chemotaxis of nearby reactive cells, they are named chemotactic cytokines.

More than 50 chemokines have been discovered so far. With the deepening of research, the structure, function and function of chemokines and their receptors have been discovered by many researchers. The interaction of chemokines and their receptors can participate in a variety of physiological functions, such as cell growth, development, differentiation, apoptosis, and distribution. They also play an important role in pathological processes, such as inflammation, pathogen infection, and trauma. Repair and tumor formation and metastasis. 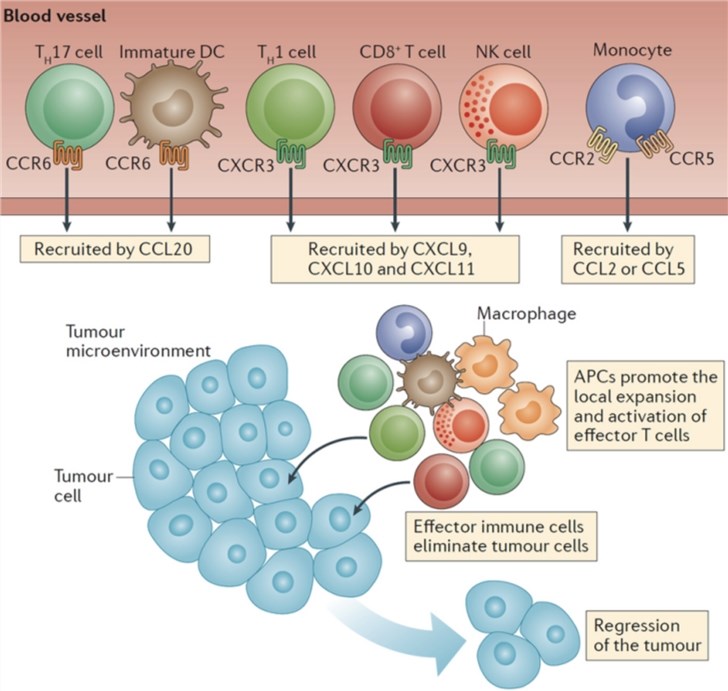 Chemokines generally consist of 70-125 amino acids and have a relatively small molecular weight (6-14KD). According to the structural characteristics of the primary peptide chain, the position and number of N-terminal cysteine residues can be divided into 4 subfamilies: CC, CXC, C and CX3C (C is cysteine, X is Any amino acid). The four types of chemokines have high structural similarity, and the amino acid sequences have certain homology. According to the expression of chemokines and their role in the immune system, they can be divided into two categories: internal environment stability chemokines and inflammatory chemokines.

Most chemokines belong to two subfamilies, CC and CXC. There are 28 members of the CC subfamily (CCL1-CCL28), which have strong chemotactic activity on neutrophils, monocytes, mast cells, dendritic cells, NK cells, T and B lymphocytes, etc. There are: monocyte chemoattractant protein (MCP-1 / CCL2), macrophage inflammatory protein (MIP / CCL3), normal T cell expression and secretion, factors that decrease expression during activation (RANTES / CCL5), etc .; CXC subfamily There are 17 members (CXCL1-CXCL17). The CXC subfamily mainly acts on neutrophils. The more important chemokines in this subfamily are: interleukin-8 (IL-8 / CXCL8), interferon gamma induction Mononuclear factor (Mig / CXCL9), interferon gamma inducible protein 10 (IP-10 / CXCL10), stromal cell-derived factor 1 (SDF-1 / CXCL12), etc. In addition, the CXC subfamily is further divided into two types, ELR + and ELR-, based on the presence or absence of glutamate-leucine-arginine sequence (Glu-Leu-Arg) before the first cysteine. Rebirth. The C subfamily contains two chemokines XCL1 and XCL2, which are mainly expressed in the thymus and act on CD8 + T lymphocytes. The CX3C subfamily has only one chemokine CX3CL1, also known as irregular chemokine (fractalkine) or neuronal chemokine (neurotactin), which is the only membrane-bound chemokine, mainly acting on monocytes and neutrophils cell. 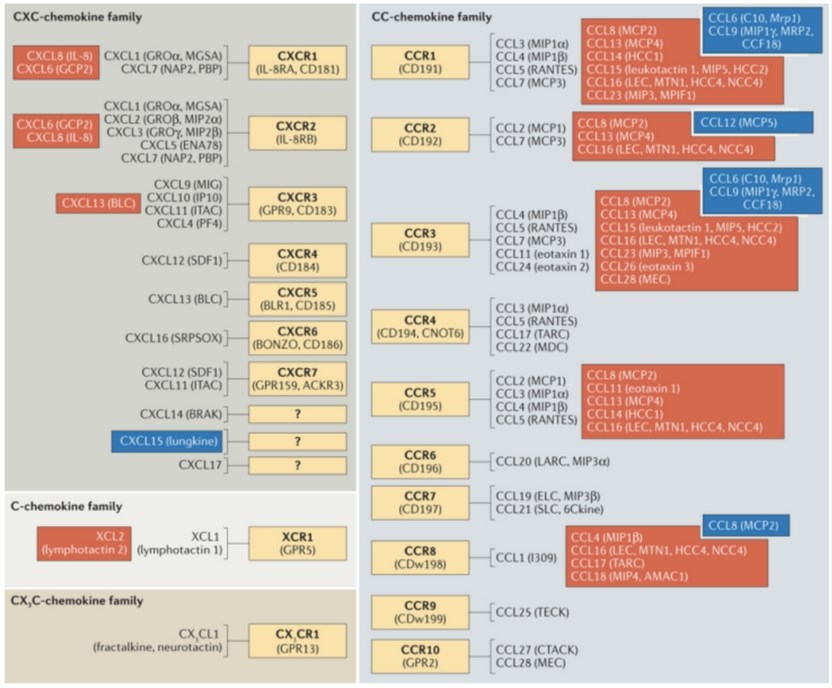 Forms of action of chemokines

To play a biological role, chemokines must bind to corresponding receptors. Chemokine receptor (Chemokine Receptor) belongs to G protein-coupled receptor, has 7 hydrophobic amino acid-rich α-helix penetrating membrane structure, mainly expressed in bone marrow-derived leukocyte subsets, but also expressed in epithelial cells, Vascular endothelial cells, nerve cells and other types of cells. Chemokine receptors are also divided into four subfamilies based on the ligands they bind: CCR, CXCR, XCR, and CX3CR. Among them, 11 species of CCR subfamily have been cloned (CCR1-CCR11), 6 species of CXCR subfamily (CXCR1-CXCR6), and the other two subfamilies have one species each: XCR1 and CX3CR1.

Chemokines interact with their receptors to form a complex network relationship, that is, a chemokine can bind to multiple receptors, and a receptor can also have multiple high-affinity chemokine ligands. Such as CCR1, it can be expressed on the surface of various inflammatory cells such as monocytes, neutrophils, eosinophils, basophils, macrophages, T, B lymphocytes, and its ligands can be CCL2, CCL3, CCL4, CCL5, CCL6, CCL8, etc. In inflammatory diseases, CCR1 can bind to various ligands to chemoattract and activate a variety of inflammatory cells expressing the receptor, which in turn causes a series of biological effects , Participate in the outcome of many inflammatory diseases; meanwhile, in addition to CCR1, chemokine CCL8 can also bind to CCR2 and CCR5, which fully reflects the complexity of the interaction between chemokine receptor and its ligand. However, CXC chemokines and their receptors cannot cross bind to CC chemokines and their receptors, with the exception of DARC, which can bind to IL-8, CXCL7, GRO-α in the CXC subfamily and CCL2 in the CC subfamily And CCL5.