Cohesin is class of proteins found in the extracellular matrix that are associated with adhesion of cells to the matrix. Including fibronectin, laminin and fibrinogen. It plays a role in activities such as cell adhesion, migration, proliferation, and differentiation. 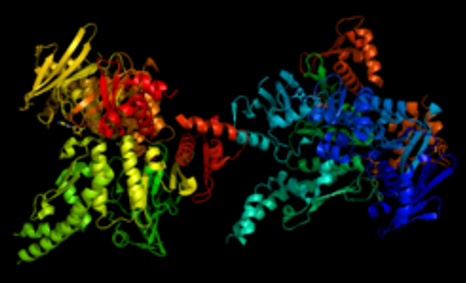 Currently, four core subunits have been identified in all cases in which the adhesion protein complex is isolated. The topology and structure of these subunits have been best characterized in germinated yeast, but the sequence conservation and biochemical and electron microscopy observations of these proteins indicate that the adhesion protein complexes in other species are structurally very similar. The two adhesion protein core subunits Smc1 and Smc3 are members of the "Stem Maintenance of Chromosomes" (SMC) family, members of which are large ATPases with an aberrant domain structure. The SMC polypeptide chain protein is folded around a central "hinge" domain, followed by an extended 45 nm long anti-parallel coiled-coil structure. At the other end of the coiled-coil domain, the globular ATPase "head" is formed by the N- and C-terminal sequences. Within the adhesive protein, the hinge domains of Smc1 and Smc3 bind tightly to each other, and the ATPase heads of both proteins are physically linked by the Scc1 subunit. Scc1 is a member of a protein family called kleisins (in Greek for "bridges") because these subunits "bridge" ATPase heads in different SMC complexes. 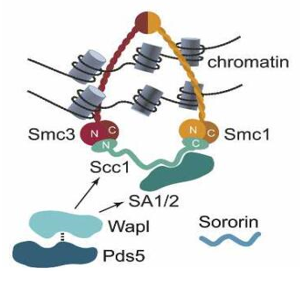 Currently, three other proteins associated with adhes have been identified.

One of these proteins is Pds5, whose sequence has been well conserved throughout evolution and is characterized by many HEAT repeats. It is known to function as a protein interaction domain in other proteins. The vertebrate cells contain two Pds5 homologs, Pds5A and Pds5B, which are all associated with cohesinSA1 and cohesinSA2. Thus, somatic vertebrate cells contain at least four different types of adhesins, including SA1 or SA2, as well as Pds5A and Pds5B. In yeast, worms and fruit flies, Pds5 is essential for cohesion, while removal of Pds5A or Pds5B from vertebrate cells has little or no effect on cohesion. Therefore, the function of Pds5A and Pds5B in sister chromatid cohesion may be redundant.

In vertebrates, adhesion protein complexes are also associated with Wapl, a protein originally found in Drosophila that has been associated with the formation of heterochromatin (eg Pds5, Wapl) Contains repeats that may mediate protein-protein interactions. Recent work has shown that Rad61 is also associated with cohesin in Saccharomyces cerevisiae, suggesting that Rad61 represents Saccharomyces cerevisiae. A fungal ortholog of Wapl. Therefore, Rad61 is now also known as Wpl1. In vertebrates, the binding of Wapl to cos sin depends on the presence of Scc1 and SA1/SA2, while recombinant Wapl forms a complex with Scc1 and SA1.

The third cohesin interactor is called sororin, a small protein originally discovered to be a substrate for the late-promoting complex/loop (APC/C) of ubiquitin ligase. Like adhesin, sorolin, the cohesion of sister chromatids is required. However, in contrast to Pds5, Wapl and the neutron core subunit, sorolin has so far only been identified in vertebrates, and its sequence is much less conserved than other cohesins, even in vertebrates.

The cohesin ring has many functions:

2. It promotes the attachment of the spindle to the chromosome.

4. Recently, many novel functions of adhesion proteins have been discovered in many different cellular processes. Adhesion proteins have been shown to be responsible for transcriptional regulation, DNA double-strand break repair, chromosomal condensation, homologous chromosome pairing during meiosis I, unidirectional, non-homologous centromere coupling, chromosome structure during meiosis I and rearrangement, DNA replication, etc. 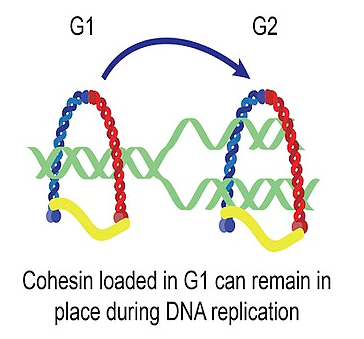