Cancer invasion is a cell and tissue-driven process for which the physical, cellular, and molecular determinants adapt and react throughout the progression of the disease. Cancer invasion is initiated and maintained by signaling pathways that control cytoskeletal dynamics in tumor cells and the turnover of cell-matrix and cell-cell junctions, followed by cell migration into the adjacent tissue.

Cancer invasion and metastasis are landmark events that transform a locally growing tumor into a systemic, metastatic, and live-threatening disease. The initial steps of local invasion include the activation of signaling pathways that control cytoskeletal dynamics in tumor cells and the turnover of cellmatrix and cell-cell junctions, followed by active tumor cell migration into the adjacent tissue. Metastasis then occurs when invading tumor cells engage with blood and lymph vessels, penetrate basement membranes and endothelial walls, and disseminate through the vessel lumen to colonize distant organs. Like cells in primary tumors, cells in metastases also proliferate, invade, and enter blood vessels, leading to secondary metastasis.

In the past few decades, cell and tumor biologists have identified the mechanisms of cell migration in normal and malignant cells, including the regulation of cell adhesion and cytoskeletal dynamics. However, attempts to define the rate-limiting mechanisms that govern invasive and metastatic cancer cell migration, such as a dominant signaling pathway, receptor-ligand interaction, or proteasesubstrate interaction, have largely failed. Instead, cancer cell invasion is now regarded as a heterogeneous and adaptive process. Indeed, it is this ‘‘plasticity’’ in cell adhesion, cytoskeletal dynamics, and mechanotransduction that perpetuates migration and dissemination under diverse structural, molecular, and even adverse microenvironmental conditions. Plasticity of invasion, together with other hallmarks of neoplasia, including cancer cell growth, survival, and genomic instability, lead to morphological, signaling, and genetic differences between primary and metastatic lesions within the same patient (intrapatient heterogeneity), within the same lesion (intratumoral heterogeneity), and across time.

The formation of new blood vessels from existing ones, a process termed angiogenesis, is a hallmark of cancer and an important process in the tumor microenvironment. New-born tumors cannot grow beyond certain limits (1 to 3 mm) and become dormant without the development of tumor vasculature. During angiogenesis, endothelial cells undergo extensive cell proliferation, migration and differentiation with help from accessory cells. All these processes are tightly controlled by a balance of angiogenic factors (VEGF, FGFs, angiopoietin-1, etc) and inhibitors (TSP-1, angiostatin, etc). Multiple proangiogenic factors including VEGF and bFGF are usually found upregulated within the tumor microenvironment and associated with tumor progression. VEGF and bFGF, through binding to their cognate receptors on endothelial cells, activate the downstream signaling pathways such as MAPK, Akt, Src and Stat3 and regulate endothelial cell function like cell proliferation, survival, migration and invasion.

Collective invasion requires cell-cell adhesion and multicellular coordination to occur simultaneously with migration, which results in multicellular groups and strands originating at the interface between tumor and stroma. Collective invasion may adopt different morphologies, which depend on the cell type, the number of jointly moving cells, and the tissue structure being invaded. For instance, groups of cells can form small clusters, solid strands, or files; if epithelial polarity is retained during migration, these structures can even form an inner lumen. In most cases of collective cancer invasion, one or several leader cells with mesenchymal characteristics form the tip of multicellular strands and generate forward traction and pericellular proteolysis toward the tissue structure. In a second type of collective invasion, a blunt bud-like tip protrudes along tissue space consisting of multiple cells that variably change position, lacking defined leader cells; this type of invasion occurs preferentially in soft tissues and cells of strong epithelial polarity. Collective migration is prevalent in morphogenesis during development and recapitulated in most epithelial and mesenchymal tumor types. 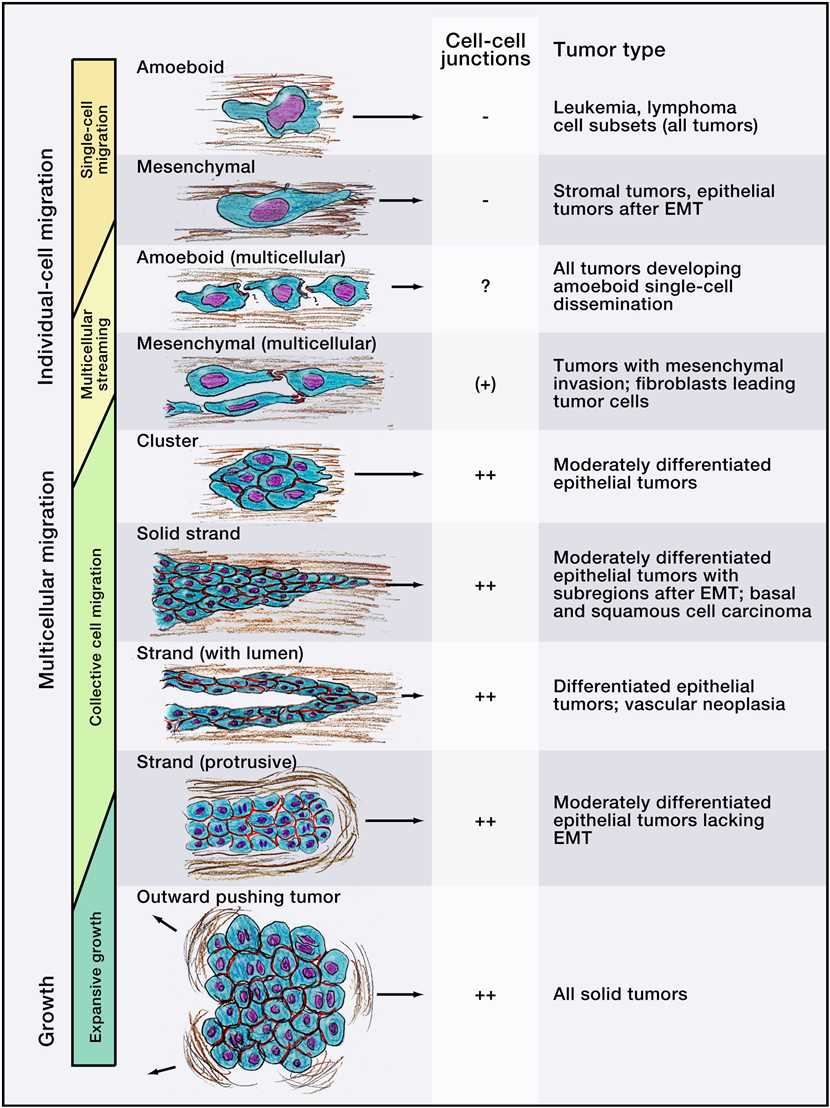 Physical and Molecular Determinants of Invasion

The molecular mechanisms underlying each migration mode depend on a set of connected mechanical and signaling pathways, which vary in their coordination and strength depending on the particular migration mode. Such variations include the organization of the cytoskeleton; the capability to remodel tissue structures; and the type, strength, and turnover of cell-substrate adhesions, cell-cell adhesions, and intercellular communication. Stromal signals modulate all of these pathways through chemokines, cytokines, and growth factors. Different types of adhesion systems contribute directly or indirectly to mechanocoupling between the actin cytoskeleton and extracellular ECM (Figure 2A) or cell surface scaffolds (Figure 2B). Together, these adhesion systems govern migration.

Plasticity of Invasion and Metastasis Programs

Together, the different modes of cancer cell invasion, the receptors and cytoskeletal regulators available for cell-cell and cellmatrix adhesion, the divergent degree of ECM remodeling capability, and the range of invasion-guiding molecular and physical tissue environments provide a multiscale framework of combinatorial possibilities or states that allow cancer invasion to be a plastic and adaptive process. Consequently, with altered tissue composition and conditioning by released factors, tumor cells undergo changes in signaling and function that lead to secondary effects in the invaded tissue and, in turn, the tumor cells themselves.