The NFκB signaling system consists of NFκB heterodimers or homodimers of Rel homology domain (RHD)-containing polypeptides and their stoichiometric inhibitor proteins, IκBs (Figure 1). The RHD within the five monomers - RelA, RelB, cRel, p50 and p52 – mediates dimerization, DNA binding, interaction with IκBs and nuclear translocation. Studies showed that different NFκB dimeric complexes are expressed cell type- and stimulus-specifically; and some of the physiologically important dimers are RelA:p50, cRel:p50 and RelB:p52.[1,2]

While in an inactivated state, NF-κB is located in the cytosol complexed with the inhibitory protein IκBα. Through the intermediacy of integral membrane receptors, a variety of extracellular signals can activate the enzyme IκB kinase (IKK). IKK, in turn, phosphorylates the IκBα protein, which results in ubiquitination, dissociation of IκBα from NF-κB, and eventual degradation of IκBα by the proteasome. The activated NF-κB is then translocated into the nucleus where it binds to specific sequences of DNA called response elements (RE). The DNA/NF-κB complex then recruits other proteins such as coactivators and RNA polymerase, which transcribe downstream DNA into mRNA. In turn, mRNA is translated into protein, resulting in a change of cell functions. [1,3] 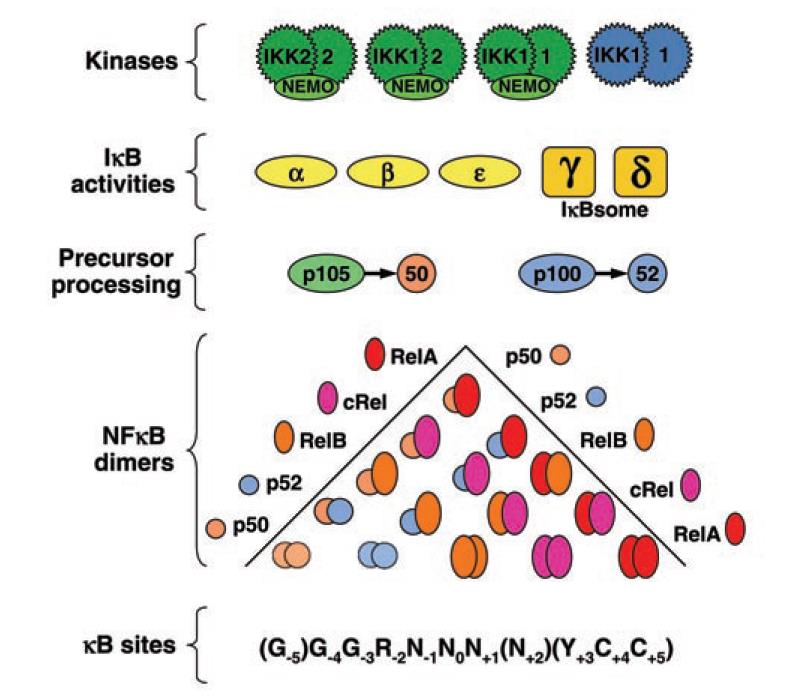 Usually, the NFκB signaling module consisting of canonical and non-canonical pathways. The non-canonical pathway is activated through developmental signals activating NIK/IKK1. This activation results in the degradation of IκBδ and processing of p100 and allows the nuclear translocation of RelA:p50, RelB:p50 and RelB:p52 dimers, which activate genes responsible for organ development. The canonical pathway is activated through pathogen and inflammatory signals activating NEMO/ IKK. This activation results in the degradation of IκBα/IκBβ/IκBε, allowing for the nuclear translocation of RelA:p50, RelA:RelA and cRel:p50 dimers, which then activate genes responsible for inflammation and survival. Though canonical and non-canonical pathways are generally thought to be distinct, recent studies have revealed numerous crosstalk mechanisms that connect them. This crosstalk involves expression control of NFκB monomers, interdependent proteolytic processing events of precursors and the newly identified IκBδ activity that is inducibly expressed by one pathway and inducibly degraded by another. [1,3,4] 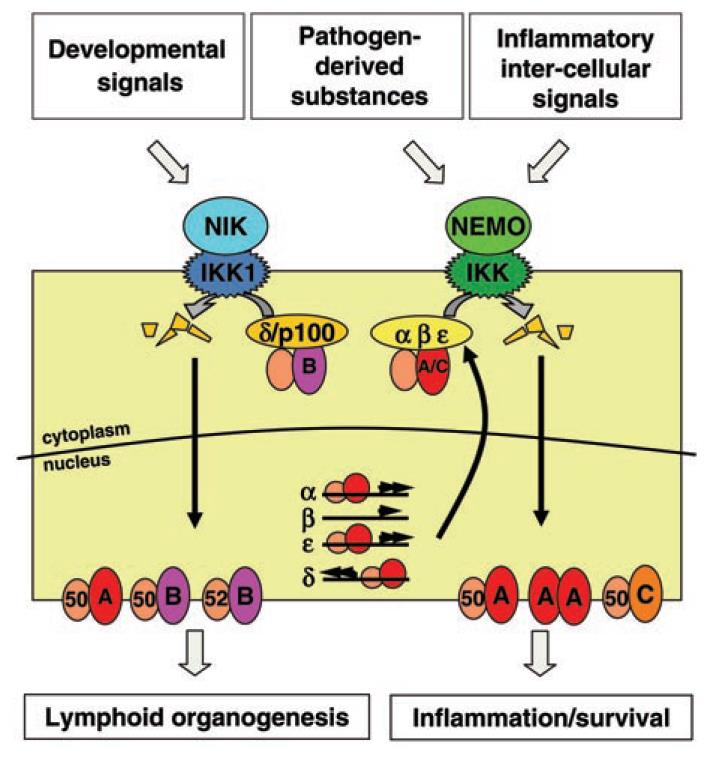 As the key role in the regulation of cell biology, aberrant activation of NF-κB signal pathway is frequently observed in many diseases and cancers. Hence methods of inhibiting NF-κB signaling has potential therapeutic application in cancer and inflammatory diseases.[5,6] Recentlly, studies showed that the drugs Disulfiram, olmesartan and dithiocarbamates can inhibit the nuclear factor-κB (NF-κB) signaling cascade.[7] And Anatabine plays the modulation role of NF-κB activity to have anti-inflammatory effects.[8]