Nuclear factor of activated T-cells (NFAT) is a class of transcription factors that have been shown to be essential for immune responses. One or more members of the NFAT family is expressed in most cells of the immune system. NFAT is also involved in the development of skeletal muscle ，cardiac, and nervous systems. NFAT was first discovered as an activator for the transcription of interleukin-2 in T cells, as a regulator for T cell immune response, but has since been found to play an important role in regulating many other body systems. NFAT transcription factors are involved in several traditional body processes as well as in development of many diseases, such as several other forms of cancer and inflammatory bowel diseases. NFAT is also being investigated as a drug target for several different disorders.

The NFAT transcription factor family contains five members, including NFATc1, NFATc2 (Figure 1), NFATc3, NFATc4, and NFAT5. NFATc1 through NFATc4 are regulated by calcium signaling, and are known as the classical members of the NFAT family. NFAT5 is a more recently discovered member of the NFAT family that has special characteristics that differentiate it from other NFAT members. Calcium signaling is critical for NFAT activation because calmodulin (CaM), a well-known calcium sensor protein, activates the serine/threonine phosphatase calcineurin (CN). Activated CN rapidly dephosphorylates the amino-terminal serine-rich region (SRR) and SP repeats of the NFAT protein, resulting in a conformational change that exposes nuclear localization signals, resulting in NFAT nuclear import. NFATc1 and NFATc2 mRNAs are expressed in peripheral lymphoid tissue, while NFATc4 is highly expressed in the thymus. However, NFATc3 mRNA is expressed at a very low levels in lymphoid tissue.

Figure 1. Structure of NTATc1 and NTATc2, protein was shown as ribbon.

Phosphorylation and dephosphorylation is key for controlling NFAT function by masking and unmasking nuclear localization signals, as shown by the high number of phosphorylation sites in the NFAT regulatory domain. The nuclear import of the NFAT protein is opposite to the maintenance kinase in the cytoplasm and the export kinase in the nucleus. Exporting kinases, such as PKA and GSK-3β, must inactivate NFAT nuclear retention. NFAT proteins have weak DNA-binding capability. Therefore, to effectively bind DNA, NFAT proteins should cooperate with different nuclear resident transcription factors generically known as NFATn. This important feature of NFAT transcription factors enables integration and coincidence detection of calcium signals with other signaling pathways such as ras-MAPK or PKC. In addition, this signaling integration is involved in tissue-specific gene expression during development. A screen of ncRNA sequences identified in EST sequencing projects discovered a 'ncRNA repressor of the nuclear factor of activated T cells' called NRON. The famous classes of binding sites for NFAT are the formation of a cooperative complex with AP-1 or other bZIP proteins to create a composite NFAT: The AP-1 site is involved in gene transcription in immune cells and binding to sites of conventional Rel family proteins. NFAT-dependent promoters and enhancers tend to have 3-5 NFAT binding sites, indicating that advanced synergistic interactions between related proteins in the cooperative complex are necessary for efficient transcription.

NFAT plays a role in the regulation of inflammation of inflammatory bowel disease (IBD, Figure 2). In the gene that encodes LRRK2 (leucine-rich repeat kinase 2), a susceptibility locus for IBD was found. The kinase LRRK2 is an inhibitor for the NFATc2 variety, so in mice lacking LRRK2, increased activation of NFATc2 was found in macrophages. This results in an increase in NFAT-dependent cytokines, triggering a severe onset of colitis. 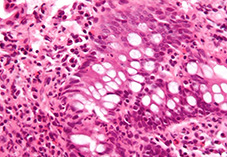 Figure 2. High magnification micrograph of cryptitis in a case of Crohn's disease.

NFAT is involved in a signaling pathway for cell transformation and tumorigenesis. The calcineurin/NFAT pathway signals for dephosphorylation of NFAT by activated calcineurin. This regulates the expression of several genes, including proteins helping with proliferation, growth, differentiation, migration, and survival, all processes commonly deregulated in cancer cells. Studies have shown that some forms of NFAT, such as the NFATc2 long isoform acts as a tumor suppressing gene whereas the NFATc1 short isoform functions as an oncogene. NFATc1 was found in many kinds of aggressive B-cell lymphomas. Furthermore, it has been found that mice treated with calcineurin inhibitors inactivate the calcineurin/NFAT pathway, induce cell death in cancer cells and inhibit cell cycle progression. The NFAT factor is a promising therapeutic target for these diseases. In explicit, NFAT transcription factors are involved in breast cancer, and more particularly in the process of cell movement based on metastasis formation. Indeed NFATc1 (NFATc2) and NFAT5 are pro-invasive and pro-migratory in breast carcinoma and NFATc3 (NFATc4) is an inhibitor of cell motility. NFATc1 regulates the expression of TWEAKR and its ligands TWEAK and Lipocalin 2 to increase the invasion of breast cancer cells, and NFATc3 inhibits the expression of Lipocalin 2 to attenuate cell invasion.