During each cell division cycle, the human genome is exposed to potentially harmful genotoxic events. This endogenous source of DNA damage is caused by conventional errors in cell metabolism or DNA replication and recombination. In addition, exposure of cells and organisms to exogenous genotoxic agents (such as ultraviolet light, oxidative stress, and chemical mutagens) can cause multiple nucleotide modifications and DNA strand breaks. To combat these attacks on the genome, cells have evolved an induction system that induces cell cycle arrest, allowing enough time to repair the damage caused. The genotoxic stress response system also activates appropriate DNA repair pathways, or induces apoptosis in the case of irreparable damage. 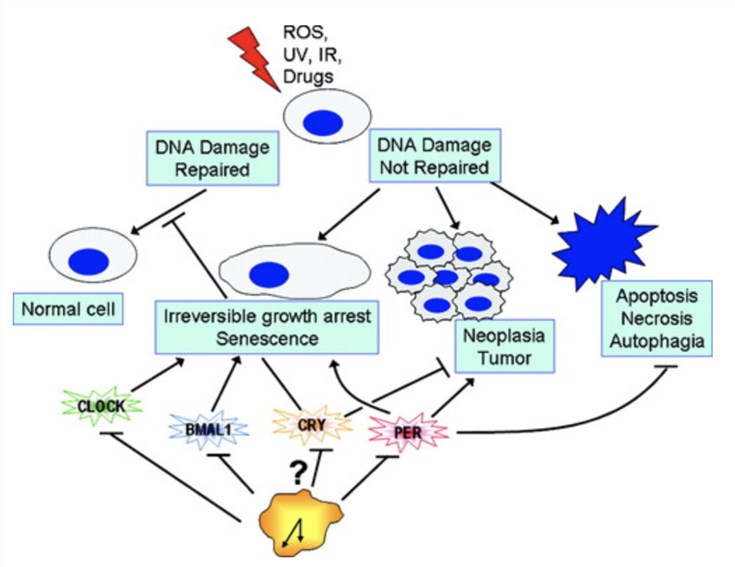 Figure 1. Circadian proteins and regulation of the cellular response to genotoxic stress. (From https://www.ahajournals.org/doi/full/10.1161/circresaha.109.207076)

In genetics, genotoxicity describes the property of chemical agents that damage the genetic information within a cell causing mutations (Genotoxicity is often confused with mutagenicity. All mutagens are genotoxic, whereas not all genotoxic substances are mutagenic). The alteration can have direct or indirect effects on the DNA: the induction of mutations, mistimed event activation, and direct DNA damage resulting in mutations. Of course, there are exist several important defense mechanisms to response genotoxic stress. These responses are expected to be very complex, involving various cellular factors that form an extensive signal transduction network. This network includes a protein kinase cascade that connects the detection of DNA damage to the activation of transcription factors, which in turn regulate the expression of genes implicated in DNA repair, cell cycle arrest and programmed cell apoptosis. What's worse is heritable changes can affect either somatic cells of the organism or germ cells to be passed on to future generations. Cells prevent expression of the genotoxic mutation by either DNA repair or apoptosis, so the damage may not always be fixed leading to mutagenesis.

It has long been acknowledged that exposure to certain chemicals is associated with the development of human cancers. For example, this linkage has been made between aflatoxins and liver cancer, amine dyes and bladder cancer, benzene and leukemia, vinyl chloride and hepatic cancer and smoking and lung cancer. To date, many human carcinogens have been identified, most of which are categorized as genotoxic agents, meaning that these chemicals target DNA and produce alterations in the genetic material of the host. Such environmental agents are only one source of genotoxic stress, with other sources including UV and ionizing irradiation, therapeutic agents and the products of normal metabolism. As a result, human cells are constantly exposed to a variety of genotoxic stresses. To cope with the resulting damage to cellular DNA, cells have developed a repertoire of responses that ensure the normal growth and survival of the organism. A logical consequence, therefore, is that alterations in these responses may be the basis for carcinogenesis. For this reason, a better understanding of cellular responses to genotoxic stress is important in the prevention and treatment of human cancers.

Extensive studies from multiple disciplines have explored the mechanisms of the cellular genotoxic responses, leading to the identification of many of the cellular components. The genotoxic stress responses can be envisioned as a signal transduction cascade in which DNA lesions act as an initial signal that is detected by sensors and passed down through transducers. Eventually the effectors receive the signal and execute the various cellular functions. Studies show that a large group of serine-threonine protein kinases, named the mitogen-activated protein kinases (MAPKs), along with their upstream kinases, have been shown to play prominent roles in the cellular genotoxic responses. Three major classes of MAPKs, i.e. extracellular signal-regulated kinase (ERK), c-Jun N-terminal kinase/stress-activated protein kinase (JNK/SAPK) and p38, can all be activated by various genotoxic stresses. The activated MAPKs then translocate to the nucleus and phosphorylate scores of target proteins, including many transcription factors. Among these transcription factors is the tumor suppressor p53 protein, which plays such an important role in the genotoxic stress responses that it is called universal sensor for genotoxic stresses.

Although the general picture of the MAPK cascade is relatively clear, the actual receptors or sensors for the DNA damage signal are still elusive. However, it is hypothesized that some multiprotein complexes that are involved in DNA maintenance or repair may also function as DNA damage sensors. For example, certain members of the Rad family, which can form protein complexes that function in cell checkpoint regulation, could act as potential sensors. Others have suggested that members of the phosphatidylinositol 3-kinase (PI-3) superfamily (include mutated, ATM- and Rad3-related (ATR), ATX/SMG-1, mTOR/FRAP and DNA-dependent protein kinase in humans), which are activated at very early stages of the DNA damage response, could serve as the sensors, as well as initiators, of the ensuing cellular genotoxic stress response. In process of genotoxic stress responses, there have three kinases play key roles in human, namely ATM, ATR and DNA-PK. They can induce genotoxic stress responses, such as, DNA repair, cell cycle arrest and apoptosis. After DNA damage is produced, the cells will make two selections. First, DNA is checked for damage by DNA damage checkpoints. Provided that the DNA is damaged, the cell cycle is stopped by triggering a cell cycle arrest response. The advantage of this is the case that, on the one hand, it can prevent the damaged DNA from being transferred to the daughter cells; on the other hand, it can give the cells time to repair the damage. Second, the cell will determine the extent of genomic damage. If the genomic damage can be repaired, the cell can still survive; if the cell genome damage is severe, it will lead to apoptosis. The principle of determining the extent of genomic damage in cells is not completely clear. Nevertheless, an explanation was given by studying the tumor suppressor gene P53. The study found that the expression level of P53 changes in accordance with the degree of damage. When the degree of damage is low, low levels of P53 will mediate cell cycle repression and DNA damage repair; when the degree of DNA damage is high, high levels of P53 will mediates apoptosis.

Genotoxic effects such as deletions, breaks and/or rearrangements can lead to cancer if the damage does not immediately lead to cell death. DNA damage is an important and ubiquitous type of stress that cells are exposed to over the life span of the organism. Sources of DNA-damaging agents, such as free radicals and peroxides generated during normal physiologic processes and during inflammation, can be endogenous, or they can be exogenous from the myriad of potentially damaging chemical and physical agents that we are exposed to in the environment. Since damage always occurs, if the DNA-damaged cells cannot be repaired or apoptotic, its genome is passed on to the offspring. Changes caused by damage are preserved in the form of mutations in the genome of the cell, eventually leading to cancer. Considering the importance of DNA damage, the organism be able to respond to this type of stress in a manner analogous to its response to other stresses, such as heat shock, with induction of a variety of different genes. These responses can keep the homeostases and the health of the organism by maintaining the stability of genomic. An improved understanding of these responses is important in the tumorigenesis.