Adhesion G protein-coupled receptors (adhesion GPCRs) are a class of 33 human protein receptors with a broad distribution in embryonic and larval cells, cells of the reproductive tract, neurons, leukocytes, and a variety of tumours (Figure 1). Adhesion GPCRs are found throughout metazoans and are also found in single-celled colony forming choanoflagellates such as Monosiga brevicollis and unicellular organisms such as Filasterea. The defining feature of adhesion GPCRs that distinguishes them from other GPCRs is their hybrid molecular structure. The extracellular region of adhesion GPCRs can be exceptionally long and contain a variety of structural domains that are known for the ability to facilitate cell and matrix interactions. Their extracellular region contains the membrane proximal GAIN (GPCR-Autoproteolsis Inducing) domain. 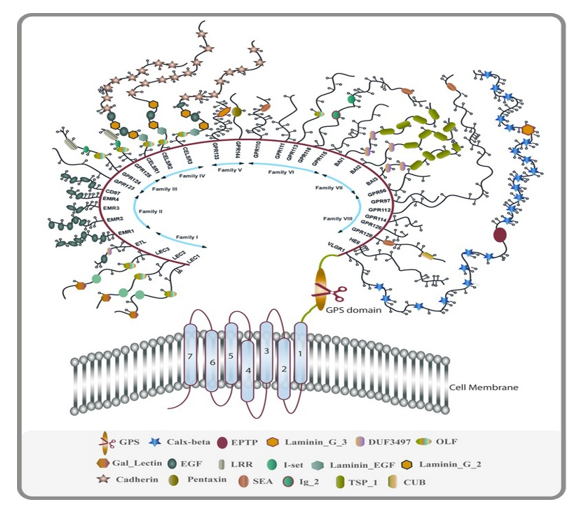 Crystallographic and experimental data has shown this structurally conserved domain to mediate autocatalytic processing at a GPCR-proteolytic site (GPS) proximal to the first transmembrane helix. Autocatalytic processing gives rise to an extracellular (α) and a membrane-spanning (β) subunit, which are associated non-covalently, resulting in expression of a heterodimeric receptor at the cell surface. Ligand profiles and in vitro studies have indicated a role for adhesion GPCRs in cell adhesion and migration. Work utilizing genetic models confined this concept by demonstrating that the primary function of adhesion GPCRs may relate to the proper positioning of cells in a variety of organ systems. Moreover, growing evidence implies a role of adhesion GPCRs in tumor cell metastasis. Formal G protein-coupled signaling has been demonstrated for a number for adhesion GPCRs, however, the orphan receptor status of many of the receptors still hampers full characterization of potential signal transduction pathways.

The GPCR superfamily is the largest gene family in the human genome containing approximately 800 genes. As the vertebrate superfamily can be phylogenetic grouped into five main families, the GRAFS classification system has been proposed, which included Glutamate, Rhodopsin, Adhesion, Frizzled/Taste2, and Secretin GPCR families.

A majority of the adhesion GPCRs are orphan receptors and work is underway to de-orphanize many of these receptors. Adhesion GPCRs get their name from their N-terminal domains that have adhesion-like domains, such as EGF, and the belief that they interact with cell to cell and cell to extra cellular matrix. While ligands for many receptors are still not known, researchers are utilizing drug libraries to investigate compounds that can activate GPCRs and using these data for future ligand research.

One adhesion GPCR, GPR56, has a known ligand, collagen III, which is involved in neural migration inhibition. GPR56 has been shown to be the cause of polymicrogyria in humans and may play a role in cancer metastasis. The binding of collagen III to GPR56 occurs on the N-terminus and has been narrowed down to a short stretch of amino acids. The N-terminus of GPR56 is naturally glycosylated, but this glycosylation is not necessary for collagen III binding. Collagen III, results in GPR56 to signal through Gα12/13 activating RhoA.

Adhesion GPCRs appear capable to follow standard GPCR signaling modes and signal through Gαs, Gαq, Gαi, and Gα12/13. As of today, many of the adhesion GPCRs are still orphan receptors and their signaling pathways have not been identified. Research groups are working to elucidate the downstream signaling molecules utilizing several methods, including chemical screens and analysis of second messenger levels in over-expressed cells. Adding drugs in vitro, while the cells are over-expressing an adhesion GPCR, has allowed the identification of the molecules activating the GPCR and the second messengers being utilized.

GPR133 signals through Gαs to activate adenylyl cyclase. It has been shown that overexpressing GPCRs in vitro can result in receptor activation in the absence of a ligand or agonist. By over expressing GPR133 in vitro, an elevation in reporter genes and cAMP was observed. Signaling of the overexpressed GPR133 did not require an N-terminus or GPS cleavage. Missense mutations in the 7TM region resulted in loss of signaling.

The latrophilin homolog LPHN1 was shown in C. elegans to require a GPS for signaling, but cleavage at the GPS site was not necessary. Furthermore, having a shortened 7 transmembrane domain, but with an intact GPS domain, resulted in a loss of signaling. This suggests that having both the GPS and 7 transmembrane domains intact is involved in signaling and that the GPS site could act as or be a necessary part of an endogenous ligand.

GPR56 has been shown to be cleaved at the GPS site and then remain associated with the 7TM domain. In a study where the N-terminus was removed up to N342 (the start of the GPS), the receptor became constitutively active and an up regulation of Gα12/13 was seen. When receptors are active, they are ubiquitinated and GPR56 lacking an N-terminus was highly ubiquitinated.