The cell cycle is the series of events which regulate the life of the cell. This regulation results from a combination of several signals from different regulatory pathways that are activated in response to specific stimuli. The cell cycle has a central role in controlling cell growth and proliferation. It frequently becomes the target of genetic alteration, the accumulation of which may lead to the deregulation of these ordered events and may be related to the onset of cancer. With the growing understanding of the important role of cell cycle regulation in tumor formation and apoptosis, cell cycle inhibitors have been further studied in the field of cancer treatment.

Progression through the cell cycle is ensured by particular protein complexes, the cyclin-dependent kinases (CDKs). The CDKs are a family of highly conserved serine/threonine kinases, which share a high homology in a particular region. CDKs may control the cell cycle by phosphorylating different targets, which may in turn be activated or inactivated. Regulation of CDK/cyclin activity can occur through regulatory proteins, such as CDK Inhibitors (CKIs). The CKIs can inhibit the activity of CDK by associating in vivo with the CDK subunit, the cyclin or the cyclin/CDK complex. This inhibition may occur in different ways, such as inhibition of the CDK kinase activity, interference with CAK mediated CDK activation, or competition with cyclins in binding to the catalytic subunit. The inhibitory process can be carried out by one or a combination of these mechanisms. The expression of these CKIs may be induced by stimuli such as senescence, contact inhibition, extracellular anti-mitogenic factors and cell cycle checkpoints. 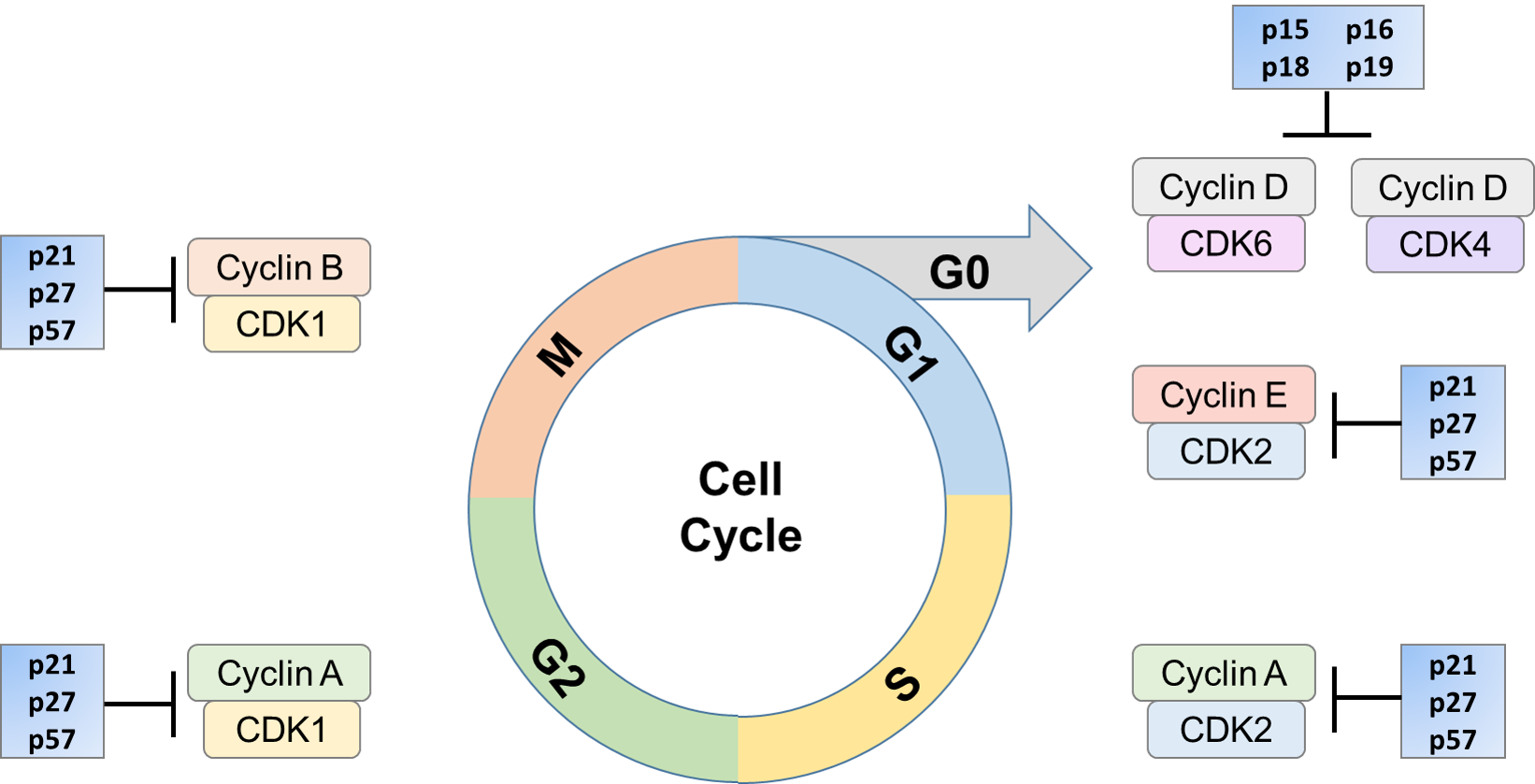 Their role in controlling cell cycle is crucial. In several forms of cancer, CKIs such as p16 and p27 are mutated. Also, they have been found to be degraded in several types of cancer. Low levels of p27 levels are correlated with poor clinical prognosis. These inhibitors can be upregulated when required, thus blocking the activation of the CDK by a cyclin. This arrests the cell in a particular part of the cell cycle until conditions are such that it can continue towards proliferation or, if necessary, be steered towards cell death.

There are two families of CKIs. The first family includes the INK4 proteins (inhibitors of CDK4), so named for their ability to specifically inhibit the catalytic subunits of CDK4 and CDK6. This family includes four proteins, p16INK4a, p15INK4b, p18INK4c, and p19INK4d. These proteins are composed of multiple ankirin repeats and bind only to CDK4 and CDK6.

The latter family is composed of the members of the Cip/Kip family, and includes p21Cip1, p27Kip1 and p57Kip2, all of which contain characteristic motifs within their amino-terminal moieties that enable them to bind to both cyclin and CDK subunits. Members of the Cip family bind to and inhibit the active cyclin/CDK complex.

Tumor transformation is a multi-step process involving the clonal accumulation of genetic lesions affecting proto-oncogenes or tumor suppressor genes. The products of these genes later play an important role in signal transduction pathways by controlling cell cycle, cell differentiation and even cell death. There is now increasing evidence that normal cell cycle progression is the result of a balanced interaction between multiple regulatory factors, such as tumor suppressor gene products and cell cycle-associated proteins. It is not surprising that basic changes in tumor suppressor genes may result in unregulated cell cycle and eventual tumor transformation. Therefore, people may define cancer as a genetic disease of the cell cycle.

The cell cycle is not an independent cellular mechanism, but a process that is closely related to other cellular regulatory mechanisms. For example, proteins that regulate chromatin remodeling also affect the cell cycle, such as the ADNP gene; proteins that inhibit cellular energy metabolism also inhibit the cell cycle, such as ALDH1L1; proteins that inhibit cancer cell growth and chromatin condensation can also act as cell cycle inhibitor proteins, such as ASB2. Other cell process, including apoptosis, cell growth, ubiquitination, calcium responsive transcription, et al., can affect the normal cell cycle. Cell biology is a complex and interacting network, so to fully understand the mechanisms of cell cycle inhibitors, you need to understand the multiplex cell regulation process.

Cell cycle inhibitors have broad prospects in the field of human cancer therapy. A variety of CDK inhibitors are in the clinical and preclinical trials. Previous studies have demonstrated that these drugs can inhibit the cell cycle and induce apoptosis in tumor cells. In clinical trials, the best effect these drugs can achieve is to stabilize the condition. In general, cell cycle inhibitors are one of the effective strategies for cancer treatment and are worthy of in-depth experiments and research.