Chemotactic cytokines are also known as chemokine. It is a superfamily of small cytokines with similar primary structure that can induce chemotactic response. Its main function is the directional movement of chemotactic cells. Chemokines can be secreted by white blood cells and some tissue cells. They are a family of more than 60 proteins with molecular weights ranging from 8 to 10kDa. Most members of the chemokine family contain four conserved cysteine molecules.

Currently, more than 50 chemokines have been found. With the deepening of research, the structure, function and role of chemokines and their receptors in vivo have been discovered by many researchers. The interaction of chemokines and their receptors can participate in a variety of physiological functions, such as cell growth, development, differentiation, apoptosis and distribution. It also plays an important role in pathological processes, such as inflammatory response, pathogen infection, wound repair, and tumor formation and metastasis.

Chemokines are generally composed of 70-125 amino acids with a small molecular weight. According to the structural characteristics of the primary peptide chain, the position and number of n-terminal cysteine residues can divide chemokines into four subgroups: CC, CXC, C and CX3C (C is cysteine and X is any amino acid). The four chemokines have high similarity in structure and homology in amino acid sequence.

Based on how chemokines are expressed and their role in the immune system, they can be classified into two categories: chemokines for homeostasis and chemokines for inflammation. Chemokines of internal environmental stability are mainly expressed in homing sites. They have the function of maintaining homeostasis of the internal environment and have a definite effect on the homing and maturation of lymphocytes. Inflammatory chemokines are expressed by stimulated cells, such as induction of inflammatory cytokines, bacterial toxins, or other stimuli that destabilize the internal environment. Their primary function is to recruit effector cells and play an important role in coordinating natural and acquired immune responses. 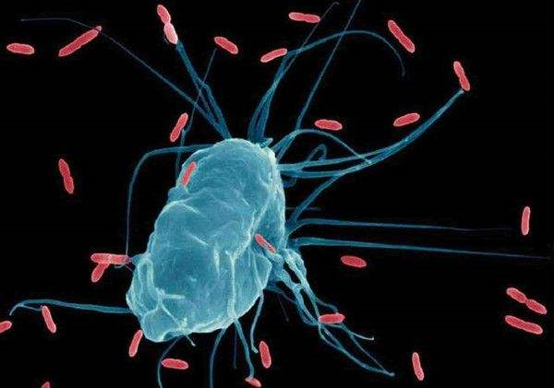 Most chemokines belong to the CC and CXC subgroups. Among them, there are 28 members of CC subgroup (ccl1-ccl28), which have strong chemotactic activities against neutrophils, monocytes, mast cells, dendritic cells, NK cells, T and B lymphocytes, among which the most important ones are: monocyte chemotactic protein (McP-1 /CCL2), macrophage inflammatory protein (MIP/CCL3), Cytokines secreted by normal T cells but decreased in expression during activation (RANTES/CCL5, et al.

For a chemokine to function biologically, it must bind to its receptor. Chemokine receptor is a g-protein-coupled receptor with 7 alpha helical transmembrane structures rich in hydrophobic amino acids, which is mainly expressed in various leukocyte subgroups derived from bone marrow, as well as epithelial cells, vascular endothelial cells, nerve cells and other types of cells. Chemokine receptors are also divided into four subfamilies according to the ligands to which they bind :CCR, CXCR, XCR, and CX3CR. Among them, CCR subgroup has cloned 11 species (ccr1-ccr11),CXCR subgroup has 6 species (cxcr1-cxcr6), and the other two subgroups have 1 species each :XCR1 and CX3CR1.

The relationship between chemokines and chemokine receptors

The interaction between chemokines and their receptors forms a complex network, that is, one chemokine can bind to multiple receptors, and one receptor can also have multiple highly compatible chemokine ligands. As CCR1, can expression on monocytes, neutrophils, eosinophils, basophils, macrophages, T, B lymphocyte and various inflammatory cell surface, its ligand can have CCL2, CCL3, CCL4, CCL5, CCL6, CCL8, CCL15, CCR1 in inflammatory bowel disease can be combined with a variety of ligands, the expression of its receptor variety of chemotaxis and activation of inflammatory cells, resulting in a series of biological effects, to participate in a variety of inflammatory disease outcome; Meanwhile, chemokine CCL8 can bind not only to CCR1, but also to CCR2 and CCR5, fully reflecting the complexity of interaction between chemokine receptors and their ligands. However, CXC chemokine and its receptor cannot cross-bind CC chemokine and its receptor, with the exception of DARC, which can bind il-8, CXCL7, gr-alpha of CXC subfamily and CCL2 and CCL5 of CC subfamily. 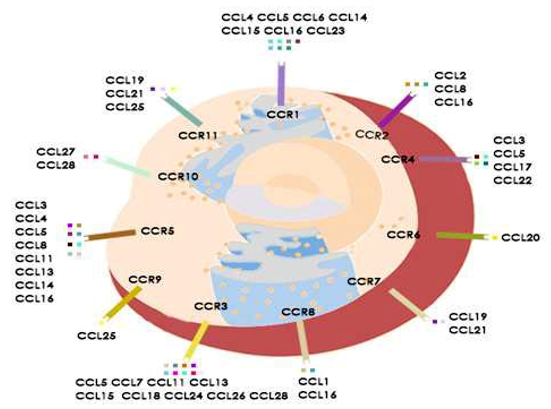 The relationship between chemokines and their receptors and human diseases

In oncology and cancer research, it has been shown that many human cancers have complex chemokine networks that may affect the extent and phenotype of leukocyte infiltration, angiogenesis, tumor cell growth, survival, and migration. Recent studies have found that the expression of specific chemokines is necessary for multiple tumor metastases. For example,CCR4 and CCR7 are highly expressed in human breast cancer cell lines and malignant breast tumors, while the ligands CX2CL12 and CCL21 of these receptors are highly expressed in organs with metastatic tumor cells. The role of chemokines and their receptors in other tumor metastases has been well reported, including melanoma, non-hodgkin's b-cell lymphoma, ovarian cancer, and pancreatic cancer. CCL5 production in breast cancer cells is associated with tumor progression, and only the expression of tiny chemokines has been found in benign breast disease. CCL2 expression level is also associated with breast cancer progression and macrophage accumulation. 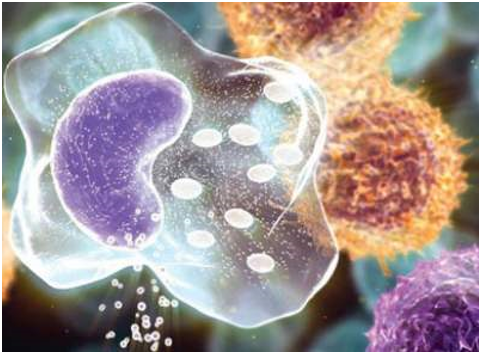 Chemokines and their receptors have a wide range of cellular sources and biological effects and play an important role in the occurrence and development of many diseases. Chemokine networks in human tumors are complex, their role is only partially reported, and there is still a great deal of unknown information to be studied. With the deepening of the research on cytokines and their receptors, it may open up new ways for the treatment of some human diseases, such as atherosclerosis, autoimmune diseases, organ transplantation, HIV infection and tumors, and open up new prospects for the clinical treatment of various diseases.