Cyclin A is a cell cycle regulatory protein that plays a role in mitosis and S phase control of mammalian somatic cells. Its dysregulated expression may play a role in cell transformation. We have cloned and sequenced the human cyclin A gene and cDNA representing its mRNA and identified its promoter. Using synchronized culture of NIH 3T3 cells stably transfected with the cyclin A promoter/luciferase construct, we show that this promoter is repressed in the G1 phase of the cell cycle and is activated upon entry into the S phase. Cell cycle regulation of the cyclin A gene promoter is mediated by a sequence extending from -79 to +100 relative to the major transcriptional initiation site. It does not require the presence of a functional retinoblastoma protein.

Since the initial discovery of Cyclin A, homologs of cyclin A have been identified in many eukaryotes but not in lower eukaryotes. The protein exists in the form of embryos and somatic cells. Two different types of cyclin A have been identified: embryo-specific form A1 and somatic form A2. Cyclin A1 is ubiquitously expressed during meiosis and early embryogenesis. Cyclin A2 is expressed in dividing somatic cells.

The progression of the cell cycle is regulated by sequential activation and inactivation of the cyclin/cdk complex. Binding of cyclin regulatory subunits is critical for activation and determines the substrate specificity of these complexes. In eukaryotes, cyclin E/cdk2 drives the initiation of DNA replication, while cyclin B/cdk1 requires both entry and mitosis. Cyclin A/cdk2 has biphasic activity (the complex is initially activated at the beginning of S phase, whereas more potent activation occurs in the early G2 phase. This is the activation of cyclin B in cyclin G2/M/ Before the cdk1 complex, it is placed in the ideal position to regulate the G2 phase. The biphasic activity of cyclin A/cdk2 is not only regulated by cyclin A protein level, but also adjusted by inhibitory tyrosine-15 phosphorylation. To date, studies of cyclin A have focused on their S phase effects, which are associated with DNA replication. The G2 phase function of cyclin A / cdk2 is controversial, and most studies have focused on the cdk2 subunit of the complex. In fact, due to the lack of phenotype of cdk2 knockout mice and the knockdown of cdk2 by siRNA or antisense oligonucleotides in cancer cells, cyclin A / cdk2 in cell cycle regulation has been questioned. However, other studies have shown that cyclin A / cdk2 plays a role in the G2 phase. Microinjection of cyclin A antibodies into tissue culture cells delays entry into mitosis, and induction of dominant negative cdk2 results in a G2 phase delay. Furthermore, cells from Drosophila mutants lack the arrest of cyclin A in G2 after maternal cyclin A is used up, indicating the importance of the cyclin A / cdk complex. Microinjection of active cyclin A / cdk2 into early G2 phase HeLa cells promote preterm birth into mitosis, and it has been proposed that this complex is required to enter mitosis and undergo mitosis until late progression.

Figure 1. Expression of human cyclins through the cell cycle.

The interaction between the cyclin cassette (a region conserved across cyclins) and the CDK region (called PSTAIRE) lays the foundation for the formation of the cyclin-CDK complex. Cyclin A is the only cyclin that regulates multiple steps in the cell cycle. Cyclin A can regulate multiple cell cycle steps as it associates with two different CDK-CDK2 and CDK1 and thus activates. Depending on the CDK partner cyclin A-binding cells, the cells will continue to pass the S phase or transition from G2 to M phase. Cyclin A is associated with CDK2 when entering S phase, and CDK1 is required for entry into M phase. 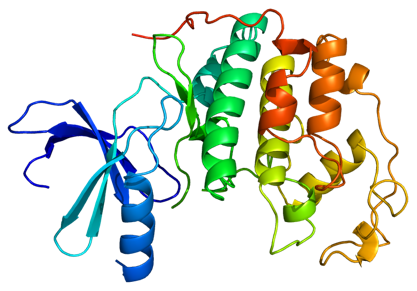