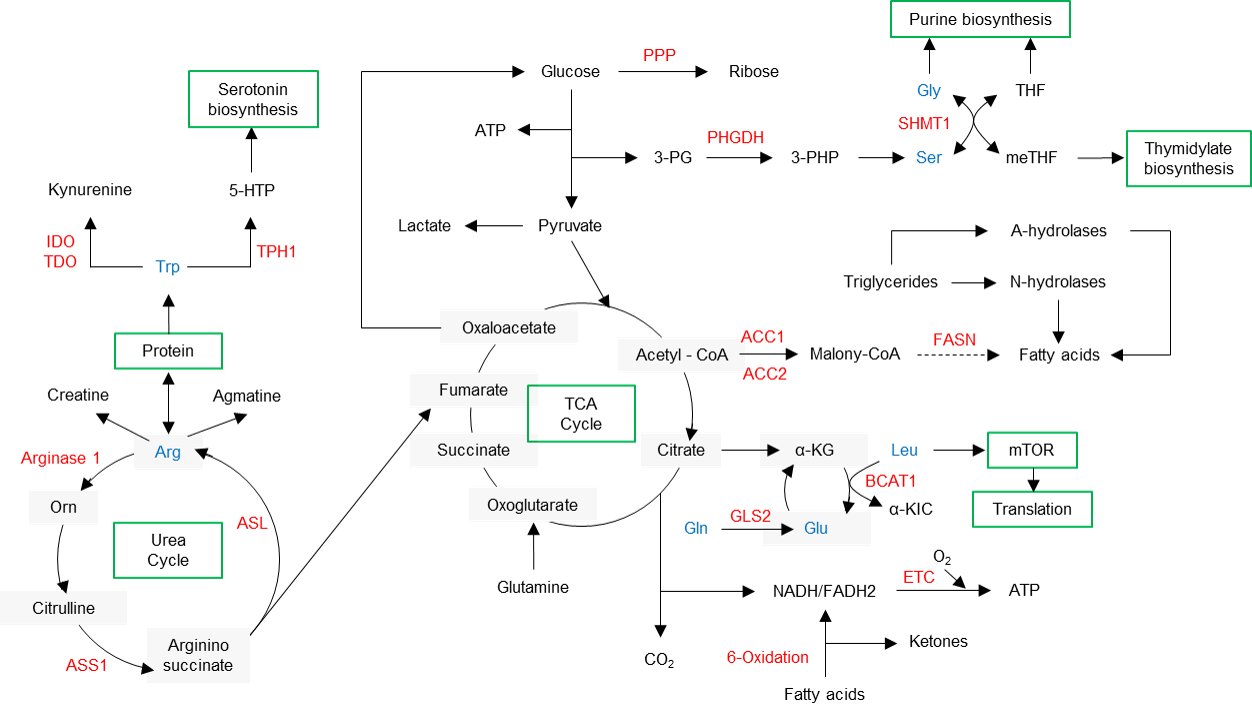 Cancer cells rewire their metabolism to promote growth, survival, proliferation, and long-term maintenance. The common feature of this altered metabolism is increased glucose uptake and fermentation of glucose to lactate. The metabolism of glucose allows for energy to be harnessed in the form of ATP through the oxidation of its carbon bonds. In mammals, the end product can be lactate or, upon full oxidation of glucose via respiration in the mitochondria, CO2. In tumors, the rate of glucose uptake dramatically increases and lactate is produced, even in the presence of oxygen and fully functioning mitochondria. This process is known as the Warburg Effect.

Aerobic glycolysis is an inefficient means of generating ATP compared to the amount obtained by mitochondrial respiration. However, the rate of glucose metabolism through aerobic glycolysis is higher such that the production of lactate from glucose occurs 10-100 times faster than the complete oxidation of glucose in the mitochondria. Thus, a reasonable hypothesis on the reason that cancer employs aerobic glycolysis should account for this inherent difference in kinetics. The Warburg Effect has been proposed to be an adaptation mechanism to support the biosynthetic requirements of uncontrolled proliferation. In this scenario, the increased glucose consumption is used as a carbon source for anabolic processes needed to support cell proliferation. This excess carbon is used for the de novo generation of nucleotides, lipids, and proteins and can be diverted into multiple branching pathways that emanate from glycolysis.

In addition to glucose and glutamine, fatty acids are an extremely relevant energy source. They can be incorporated from the extracellular media, or can be potentially obtained from hydrolysed triglycerides by neutral (N) hydrolases in the cytoplasm or acid (A) hydrolases through lipophagy. Fatty acid synthesis is an anabolic process that starts from the conversion of acetyl CoA to malonyl CoA by acetyl CoA carboxylase. Malonyl CoA is then committed to fatty acid synthesis (FAS) and is involved in the elongation of fatty acids through fatty acid synthase (FASN). Additional modifications of fatty acids can be carried out by elongases and desaturases. Fatty acids are catabolized by the fatty acid oxidation (FAO; also known as β-oxidation) pathway. Relative to their dry mass, fatty acids provide twice as much ATP as carbohydrates, and in turn they are the preferred nutrient for storage under conditions of nutrient abundance. FAO is composed of a cyclical series of reactions that result in the shortening of fatty acids and that generate in each round NADH, FADH2 and acetyl CoA, until the last cycle when two acetyl CoA molecules are originated from the catabolism of a four-carbon fatty acid. NADH and FADH2 that are generated by FAO enter the electron transport chain (ETC) to produce ATP. FAO is carried out in energy-demanding tissues (such as the heart and skeletal muscle) and in the liver as a central organ for nutrient supply and conversion. 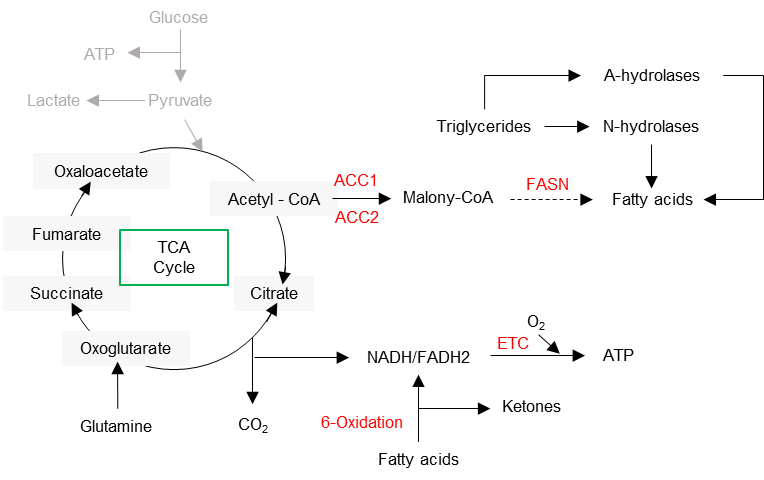 Cancer cells seem to require increased ATP production. This is exemplified by loss of attachment (LOA) to the extracellular matrix. Cells derived from solid tumors that undergo LOA display inhibition of glucose uptake and catabolism, which results in the loss of ATP, NADPH and increased production of reactive oxygen species (ROS). It is reported that in these settings ROS inhibit FAO, and that antioxidants counteract ROS accumulation and can reactivate FAO, increase ATP levels and prevent LOA-induced anoikis, although the exact mechanism by which an increase in ATP rescues anoikis remains unclear. 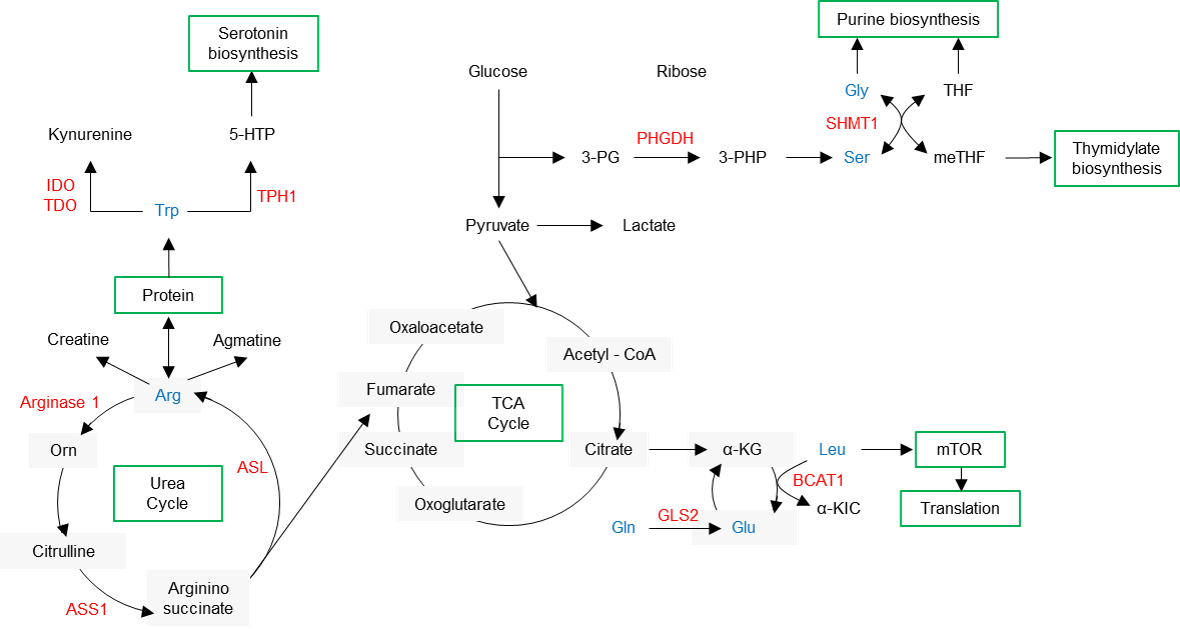 The amino acid arginine has considerable nutritional and physiological significance as it is recognized as an important precursor for the synthesis of proteins, urea, and creatine as well as for the synthesis of signaling molecules such as glutamate, nitric oxide, and agmatine. Many tumors are dependent on exogenous arginine for growth as they lack the enzyme argininosuccinate synthetase 1 (ASS1). ASS1 catalyzes the conversion of citrulline into arginine succinate in an ATP-dependent manner, completing one of the last steps in the arginine biosynthetic pathway.

Tryptophan is another amino acid linked to the regulation of anti-tumor immune responses. Tryptophan degradation occurs via the kynurenine pathway where two different enzymes, indoleamine-2,3-dioxygenase (IDO) and tryptophan-2,3-dioxygenase (TDO), catalyze the conversion of tryptophan into kynurenine, while tryptophan hydroxylase-1 (TPH-1) converts tryptophan to 5-hydroxytryptophan and provides precursors for serotonin biosynthesis.

Serine and glycine metabolism are interconnected via the glycine cleavage system, a major metabolic pathway in one-carbon metabolism that provides cofactors for purine and pyrimidine nucleotide biosynthesis for cancer cells. Studies strongly suggest that cancer cells have an increased capacity for de novo serine synthesis via the phosphoglycerate dehydrogenase (PHGDH) pathway. PHGDH oxidases around 10% of 3-phosphogycerate produced during glycolysis by converting it to 3-phosphohydroxypyruvate. This compound is then transaminated, forming 3-phosphoserine, and dephosphorylated to yield serine.