The nuclear membrane has a typical lipid bilayer structure, which is defined as the outer and inner membrane regions based on the distribution. There are small nuclear pores between the membranes. The stability of the nuclear membrane is maintained by the mesh structure of the two intermediate filaments: the internal network forms a nuclear layer on the inner membrane. A looser network is formed externally to provide external support. 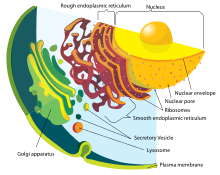