Tight junctions, also known as occluding junctions, are multiprotein-linked complexes whose general function is to prevent transport of solutes and water from leaking and to seal the paracellular pathway. Tight junctions can also act as a leak pathway by forming selective channels of small cations, anions or water. Tight junctions are only present in vertebrates. The corresponding connections that occur in invertebrates are separate connections. 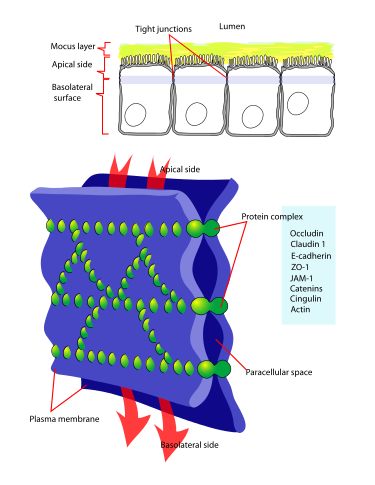 Tight junctions consist of a branch network of sealed wire bundles, each of which acts independently of each other. Therefore, the efficiency of the junction preventing the passage of ions increases exponentially as the number of chains increases. Each strand is formed by a row of transmembrane proteins embedded in two plasma membranes, and the extracellular domains are directly linked to each other. There are at least 40 different proteins in close junctions. These proteins are composed of transmembrane proteins and cytoplasmic proteins. The three major transmembrane proteins are occludin, claudins and junctional adhesion molecule (JAM) proteins. These are associated with different peripheral membrane proteins such as ZO-1 located inside the plasma membrane cells, which anchor the chain to the actin component of the cytoskeleton. Thus, tight junctions connect the cytoskeleton of adjacent cells together. 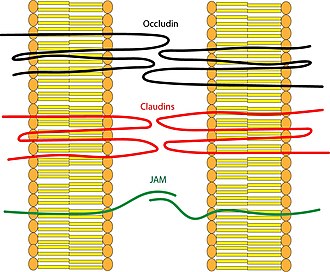 Figure 2. Depiction of the transmembrane proteins that make up tight junctions: occludin, claudins, and JAM proteins.

Tight junctions help maintain cell polarity by preventing lateral diffusion of the integral membrane protein between the apical and lateral/substrate surfaces, allowing for specific functions of each surface. This is intended to preserve cross-cell transport.

Tight junctions prevent molecules and ions from passing through the space between adjacent plasma membranes, so the material must actually enter the cell (by diffusion or active transport) to pass through the tissue. Studies using cryo-fracture methods in electron microscopy are well suited to reveal the lateral extent of tight junctions of cell membranes and are useful for showing how tight junctions are formed. The tightly controlled constrained intracellular pathway of tightly linked barrier systems allows precise control over which substances can pass through a particular tissue. (Tight junctions play this role in maintaining the blood-brain barrier.) At present, it is unclear whether control is active or passive and how these pathways are formed. In a study of cell-side transport of tight junctions across the proximal tubules of the kidney, a two-way model was proposed: a large gap fracture formed by discontinuities in the TJ complex and a large number of small circular holes.

In human physiology, there are two main types of epithelial cells that use different types of barrier mechanisms. Epidermal structures, such as the skin, form a barrier to many keratinized squamous cells. On the other hand, internal epithelial cells rely more on tight junctions to achieve their barrier function. This barrier is mainly formed by one or two layers of cells. It has long been unclear whether tight cell junctions also play any role in the barrier function of the skin and similar external epithelium, but recent studies have shown this to be the case.

Epithelial cells are classified as "tight" or "leaked" and they are tightly connected to prevent the flow of water. Examples of tight epithelial cells include the distally convoluted renal tubules, the nephron in the kidney, and the bile duct through the liver tissue. Other examples are the blood-brain barrier and the blood-cerebrospinal fluid barrier.