What is Cellular Metabolic Process?

Cellular metabolism a series of biochemical reactions that happened in living organisms to maintain life. Through these reactions, living organisms acquire energy and biosynthetic precursors. Cellular metabolism includes catabolism and anabolism. Catabolism means the breaking down of macromolecules to produce energy and intermediary metabolites. Then the energy and intermediary metabolites used to produce macromolecule that essential for life. The process of constructing molecules from smaller components called anabolism. Catabolic reactions are typically further subdivided according to their substrate into carbohydrate, fat, and protein catabolism. The classical cellular metabolic processes include glycolysis, TCA cycle, etc. Reprogramming of cellular metabolism is also another important area that attracting a lot of research.

Glycolysis was the first identified and better studied metabolic pathway. During glycolysis, one molecule of glucose is broken into two molecules of pyruvate by enzyme. Free energy in the form of two molecules of ATP and two NADH also released. Entrancement of glucose in cell is the first step of the metabolism of glucose. The molecule could not freely diffuse through cellular membranes. Mammalian cells mostly import glucose by facilitative diffusion, through the action of glucose transporters (GLUT) that belong to the (SLC2A) family of membrane transport proteins. In some cellular tissues, this transport determines the rate. The most studied transporters of this group range from GLUT1 to GLUT4. GLUT1 encoded by the gene SLC2A1, was one of the first membrane transporters purified and it is the most studied one. It mediates the basal and constant glucose uptake in several tissues together with GLUT3. GLUT2 has a very low affinity for glucose, that means only when concentration of this metabolite is high, glucose uptake could occur. The SLC2A4 gene encodes GLUT4, which is mainly expressed in adipocytes, skeletal muscle, and cardiomyocytes. GLUT4 resides in intracellular vesicles under basal conditions. However, for insulin signaling, these transporters are fused to the plasma membrane exposing GLUT4 to the extracellular compartment, thus increasing glucose uptake and metabolism quantity signals for excess of cellular energy. Then glucose-6-phosphate reversibly isomerized into fructose-6-phosphate, then further phosphorylated to fructose-1,6-bisfosfate by phosphofructokinase (PFK), and the presence of one ATP molecule. The irreversible step catalyzed by PFK is an important rate-determining step of glycolysis which positively regulated by AMP and negatively by ATP, fructose-2,6-phosphate, and citrate. This balance shows the importance of the ATP/AMP ratio for the rate of glycolysis, and also its regulation to channel carbon molecules through the oxidative branch of the pentose phosphate pathway (PPP) for maintaining the NADPH pool for fatty acid synthesis. Ultimately, FK is also capable of indirectly inhibiting hexokinase. If PFK is inactive, fructose-6-phosphate and glucose-6-phosphate accumulates, thus inhibiting hexokinase. The catalytic activity plays an essential role in energy metabolism. 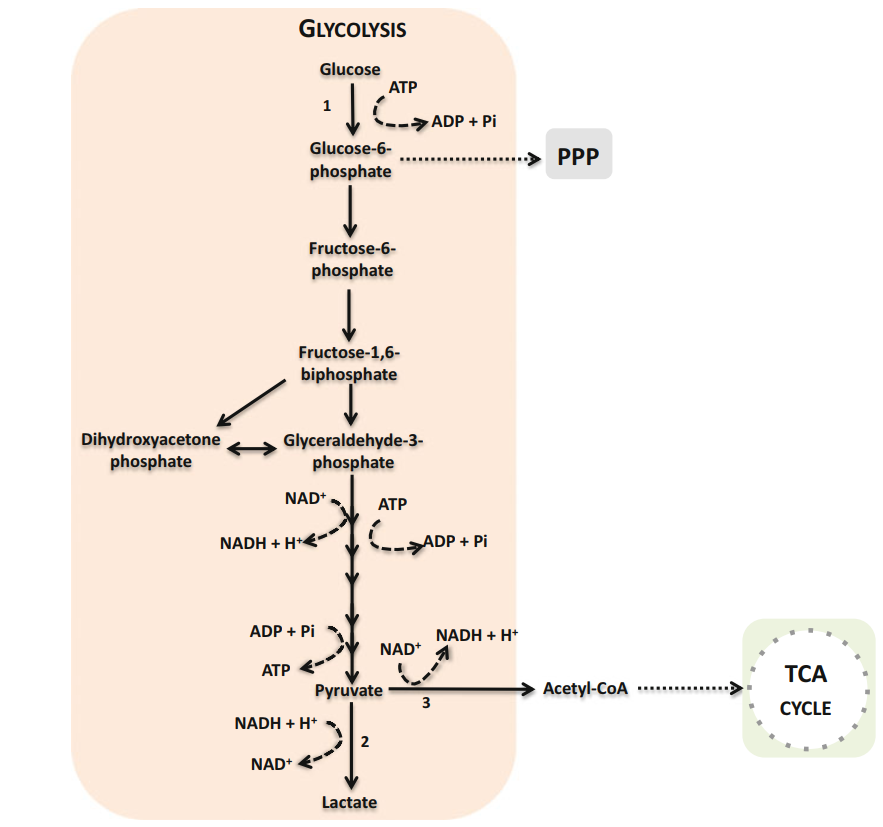 TCA cycle is a process that produce several biosynthetic precursors for de novo synthesis of macromolecules. Oxaloacetate and α-ketoglutarate are precursors for aspartate and glutamate synthesis, which may originate other amino acids, such as asparagine, arginine, proline, and glutamine. On the other hand, these intermediates can be also used in the synthesis of pyrimidines and purines. They are the main building blocks for nucleic acids. By phosphoenolpyruvate carboxykinase, oxaloacetate could also be converted into phosphoenolpyruvate, and the first step of gluconeogenesis is completed. Withdrawaling of succinyl-CoA is the reason of the central metabolism that originates the synthesis of porphyrin rings, crucial for hemoglobin production. Citrate production may have a fateful role in de novo fatty acid synthesis. However, when these intermediates are withdrawn from the TCA cycle, the rate of the cycle is reduced. Only their replenishment could allow the continuation of this process. This important balance is mainly assured by pyruvate carboxylase. Pyruvate carboxylase produces oxaloacetate by carboxylating pyruvate, which ensure the homeostatic levels of TCA intermediates. 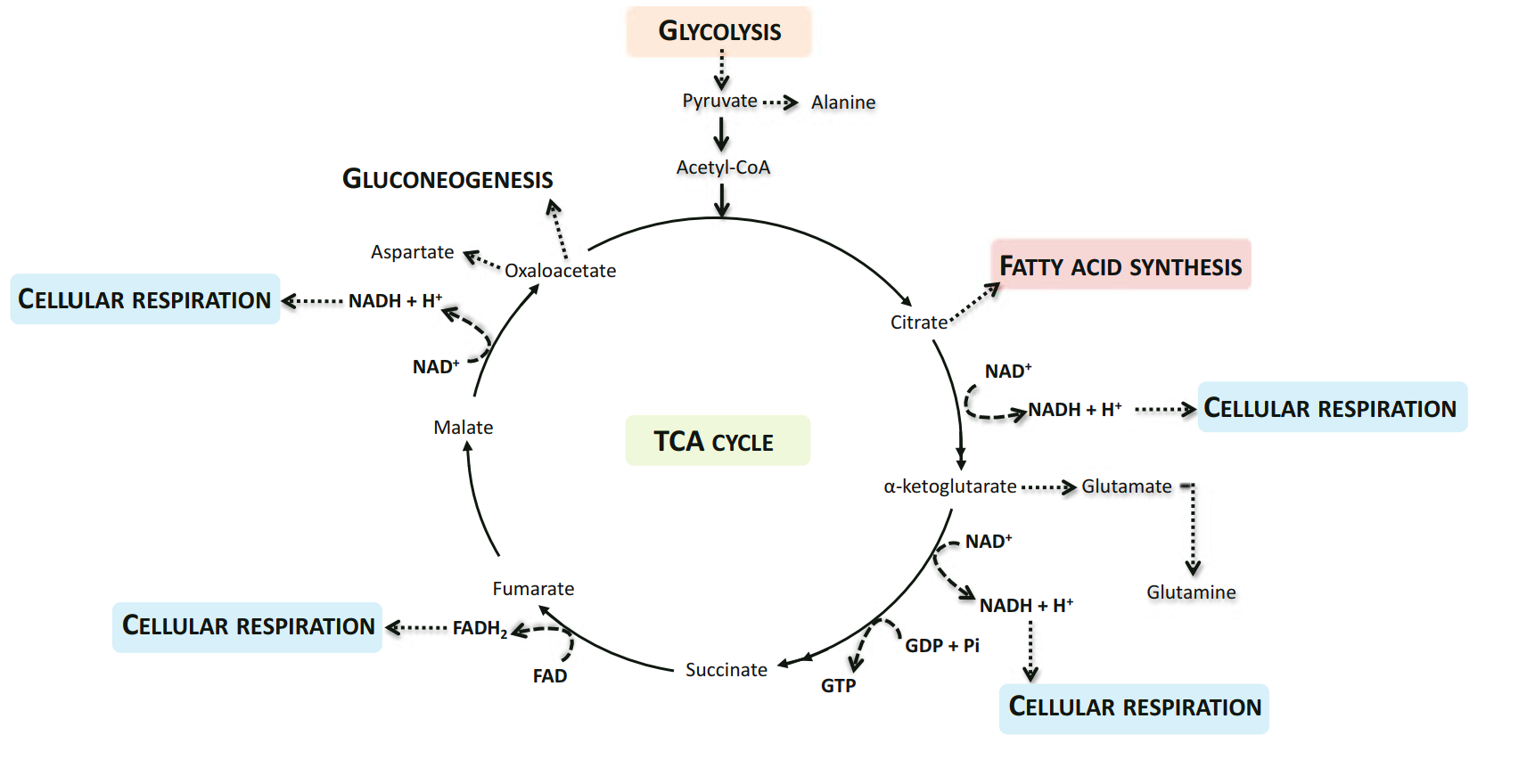 There are great amounts of reprograming mechanisms in cellular metabolism. One of them is reprogramming of the mitochondrial protein acetylome triggered by SIRT3. Calorie restriction (CR) extends life span in diverse species. Mitochondria plays a key role in CR adaptation. Reversible protein acetylation might be a dynamic protein modification that regulates metabolism through multiple mechanisms. The sirtuin family of nicotinamide adenine dinucleotide (NAD)+-dependent protein deacetylases is regulators of the cellular adaption to CR and directly deacetylate specific metabolic enzymes. Sirtuins are reported as critical components of the CR-dependent extension of life span, and in multiple organisms, sirtuins are linked with improved health span and metabolic regulation. Sirtuin3 (SIRT3) is essential for the prevention of age-related hearing loss. Researches showed that SIRT3 regulates the function of several mitochondrial proteins involved in oxidative phosphorylation, fatty acid oxidation, the urea cycle, and the antioxidant response system. SIRT3 is considered to be the main protein mitochondrial deacetylas. 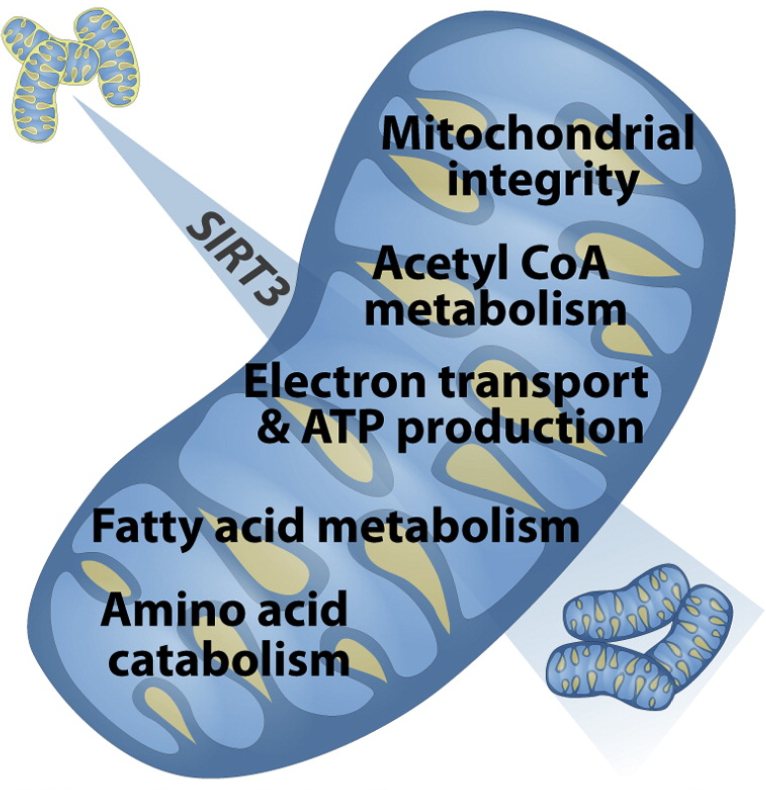 Lin28 is another type of protein which could enhances tissue repair by reprogramming cellular metabolism. Lin28a is a highly conserved RNA-binding protein expressed during embryogenesis, which plays important roles in development, pluripotency, and metabolism.  Lin28a reactivation improved hair regrowth by promoting anagen in hair follicles and accelerated regrowth of cartilage, bone, and mesenchyme after ear and digit injuries. Lin28a bound to mRNAs and enhances the translation of mRNAs for several metabolic enzymes, promote glycolysis and oxidative phosphorylation (OxPhos). Lin28a-mediated enhancement of tissue repair was negated by OxPhos inhibition, and a pharmacologically induced increase in OxPhos enhanced repair. Lin28a enhances tissue repair in some adult tissues by reprogramming cellular. 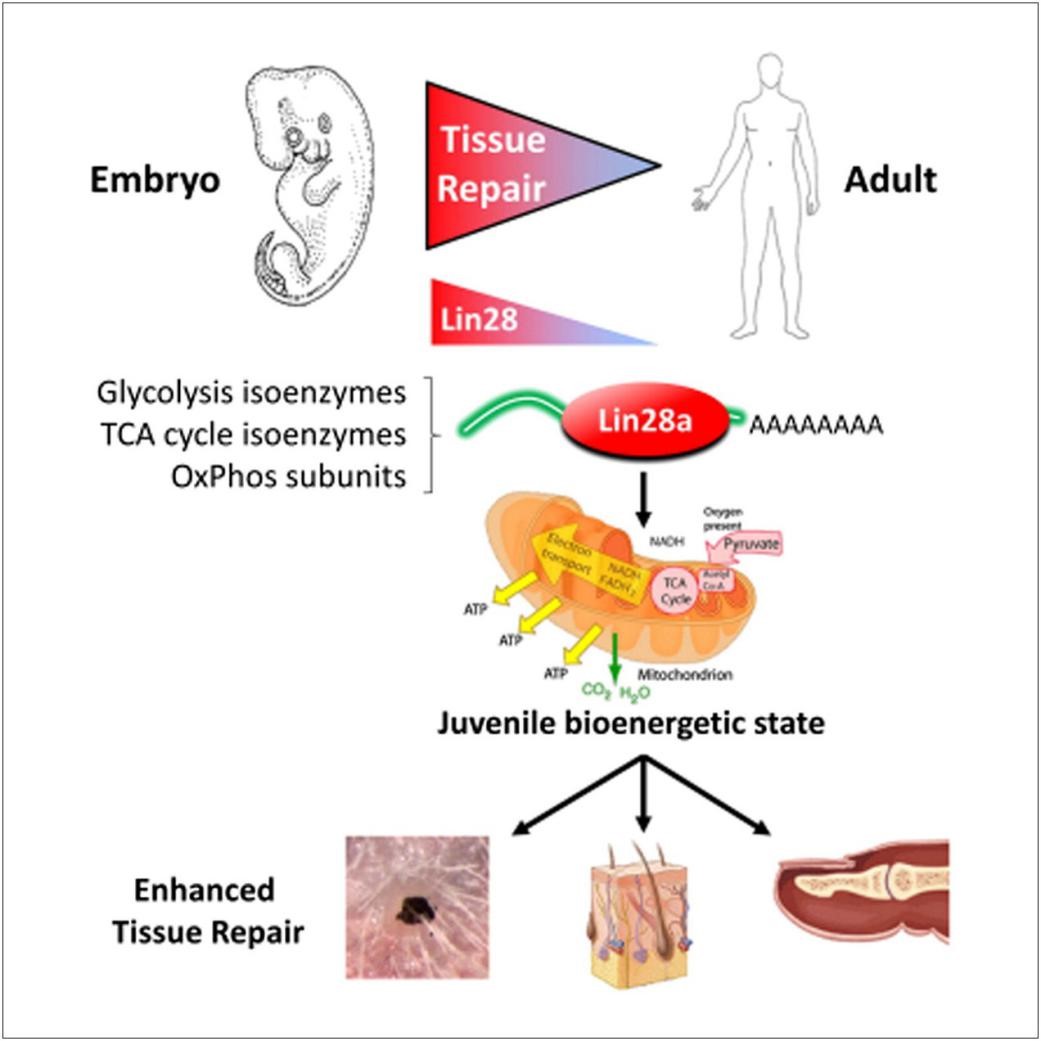 Figure 4.  The function of Lin28 protein in Tissue Repair