Forkhead box (Fox) proteins characterized by a conserved winged-helix DNA binding domain constitute a large family of transcription factors. Fox proteins regulate the gene transcription not only by recruiting various coactivators like most transcription factors, some members of this family but also by binding to the condensed chromosomes directly, which can remodel chromatin structure and generate a combinatorial effect with other transcription factors to cause significant changes in expression. PI3K-Akt/PKB, TGFβ, Smad and MAP Kinase signal pathways regulate the activity of Fox proteins via phosphorylation reaction. The Fox proteins influence diverse biological processes, such as embryonic development, cell cycle regulation, glucose and lipid metabolism, aging, and immunoregulation. 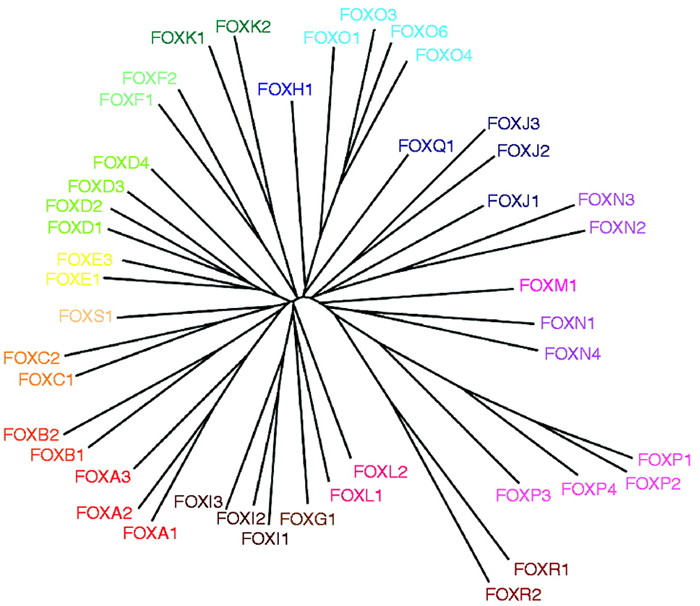 Fox factors have been shown to influence a diverse range of biological processes. For instance, FOX genes are necessary for the establishment of the body axis, for the development of cell types from all three germ layers, metabolic and immunoregulatory processes, cell cycle control, and cellular survival. Oncogenic fusion proteins with members of the FOXO subfamily have been implicated in rhabdomyosarcoma and leukemia. Furthermore, the expression levels of several fkh genes have been correlated with various types of cancer. Currently, 11 different human developmental disorders have been associated with mutations in FOX genes, which have an interesting prevalence of eye abnormalities, for example, mutations in FOXC1, FOXC2, FOXE3, and FOXL2 lead to ocular phenotypes in mice and humans.

Function of Fox protein and relationship with disease

Since the discovery of the conserved forkhead (Fkh) DNA binding domain more than 20 years ago, members of the Fkh or forkhead box (FOX) family of transcription factors have been shown to act as important regulators of numerous developmental and homeostatic processes. The human genome contains 44 Fkh genes, several of which have recently been reported to be essential for female fertility. In previous research，the researchers highlight the roles of specific FOX proteins in ovarian folliculogenesis and present our current understanding of their molecular function. In particular, they describe what they have learned from loss-of-function studies using mouse models as well as human genetics and illustrate how different stages of folliculogenesis, both in oocytes and in somatic granulosa and theca cells, are regulated by FOXC1, FOXL2, and FOXO subfamily members.

The primordial follicle pool inside the ovary presents a limited resource that must be carefully protected and efficiently exploited to sustain female fertility. Once this pool of primordial follicles is depleted, the fertile period ends and menopause ensues. Two prominent members of the Fkh family of transcription factors, FOXL2 and FOXO3, both serve an essential maintenance function that is necessary throughout the entire female reproductive lifespan. FOXL2 functions throughout life to stabilize somatic cell fate in both granulosa and theca cells to maintain ‘femaleness’, whereas FOXL3 acts within oocytes to keep primordial follicles in check in order to preserve the resting follicle pool and thus the female reproductive potential.

With the evolution of biology, this family has been expanding and has developed a tissue-specific expression pattern. For example, in the process of embryonic development, different embryo layers or different parts of the same embryo layer have characteristic Fox gene expression, which is involved in the determination and differentiation of cell types and often controls metabolism in mature individuals.

In most cases, Fox protein plays a role in inducing apoptosis. Currently, the known mechanisms can be divided into two aspects. One is binding to the promoter region of the coding gene of FasL, promoting its expression and thus conducting apoptosis signal. Second, the ratio between pro-apoptotic and pro-survival members in the Bcl-2 family was adjusted to indirectly induce the apoptotic effect. For example, FOXO3a promoted Bim expression, while FOXO4 indirectly inhibited Bcl-xl expression by inducing Bcl-6.

Fox protein DAF-16 has the function of regulating stress resistance and anti-aging in C.elegans, and it also has the same function in the Fox subfamily, its vertical homolog in mammals. The inactivation mutation of the p66Shc gene encoding the adaptor protein in mice increased FOXO activity and increased the lifespan of mice by 30%, resulting in oxidative stress resistance and decreased apoptosis. One reason is that FOXO subgroup activates a series of target genes expression of antioxidant stress during oxidative stress, which promotes G2 phase arrest and DNA repair in cells.