DNA polymerase is an enzyme that synthesizes DNA molecules from deoxyribonucleotides (components of DNA). These enzymes are required for DNA replication and usually work in pairs to produce two identical DNA strands from a single original DNA molecule. In the process, the DNA polymerase "reads" the existing DNA strand to create two new strands that match the existing DNA strand. Each time a cell divides, a DNA polymerase is required to help replicate the DNA of the cell so that a copy of the original DNA molecule can be passed to each daughter cell. In this way, genetic information will be passed down from generation to generation. Before replication occurs, an enzyme called helicase destroys the tightly bound form of the DNA molecule, which in the process destroys the hydrogen bonds between the nucleotide bases. This will open or "decompress" the double-stranded DNA to provide two single-stranded DNAs that can be used as replicating templates.

DNA polymerases have a highly conserved structure, which means that their overall catalytic subunits vary little between species, regardless of their domain structure. Conservative structures often indicate important, irreplaceable functions of the cell, and its maintenance provides an evolutionary advantage. The shape can be described as a right hand similar to the thumb, finger and palm area. The palm domain appears to catalyze the transfer of phosphoryl groups in the phosphoryl transfer reaction. When the enzyme is active, the DNA binds to the palm of the hand. The reaction is believed to be catalyzed by two metal ion mechanisms. The function of the finger domain is to bind the nucleoside triphosphate to the template base. The thumb domain plays a potential role in the synthesis, transport and localization of DNA. 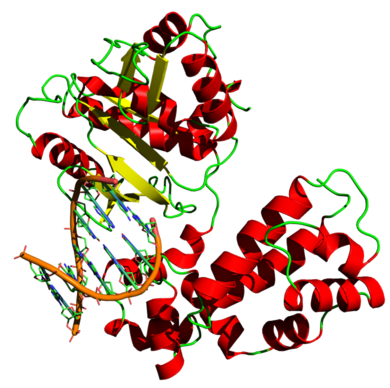 Transaminase is an enzyme that catalyzes the transamination reaction between an amino acid and an alpha-keto acid. They are important in the synthesis of amino acids that form proteins. 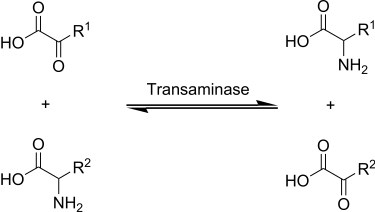 Figure 2. Aminotransfer reaction between an amino acid and an alpha-keto acid.

The amino acid contains an amine (NH2) group. The keto acid contains a ketone (=O) group. In amino transfer, the NH2 group on one molecule is exchanged with the =O group on the other molecule. The amino acid becomes a keto acid and the keto acid becomes an amino acid. Most transaminase enzymes are proteinases. However, it has been found that certain transaminase activities of ribosomes are catalyzed by ribozymes (RNases). Transaminase requires the coenzyme pyrido aldehyde. When an amino acid is converted to a keto acid, it is converted to pyridoamine in the first half of the reaction. The pyridoamine bound to the enzyme is further reacted with pyruvic acid, oxaloacetic acid or α-ketoglutaric acid to give alanine, aspartic acid or glutamic acid, respectively. Many transamination reactions occur in tissues, which are catalyzed by transaminase specific for a particular amino/keto acid pair. The reaction is easily reversible and the direction is determined by which reactants are excessive. This reversibility can be used in synthetic chemical applications to achieve the synthesis of valuable chiral amines. A particular enzyme is named, for example, from one of the reactant pairs. The reaction between α-ketoglutaric acid and alanine between glutamic acid and pyruvic acid is abbreviated as glutamic acid-pyruvate transaminase or GPT.

Helicase is a class of enzymes that are essential for all organisms. Their main function is to unlock the genes of the organism. They are motor proteins that move along the nucleic acid phosphodiester backbone and separate the two annealed nucleic acid strands (ie, DNA, RNA or RNA-DNA hybrids) using energy from ATP hydrolysis. The helicase produced by a variety of processes must catalyze strand separation. About 1% of the eukaryotic genes encode a helicase. The human genome encodes 95 non-redundant helicases: 64 RNA helicases and 31 DNA helicases. Many cellular processes, such as DNA replication, transcription, translation, recombination, DNA repair, and ribosomal biogenesis, involve the isolation of nucleic acid strands, which requires the use of helicase. 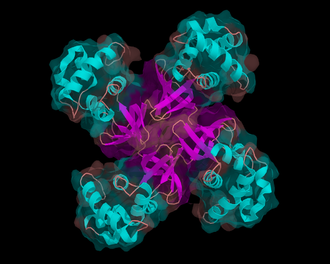 2. Karmen A.; et al. A note on the spectrometric assay of glutamic-oxalacetic transaminase in human blood serum. The Journal of Clinical Investigation. 1995, 34 (1): 131–3.