The distribution and dynamics of proteins in living cells can provide important clues as to the function and regulation of cell cycle. The most common and successful method for real-time observations and studies of cell cycle is to use cell cycle markers of the special proteins. However, these proteins undergo dynamic changes in their subcellular distribution and interactions throughout the cell cycle. The analysis of such cell cycle dependent changes in living cells have been hampered by the lack of suitable cell cycle markers that allow identification of the various cell cycle stages.

4-aminobutyrate transaminase is a protein encoded by ABAT in humans. This gene is mainly located in the tissue of neurons. ABAT consists of monomers of two enzymes, each having a molecular weight of 50 kDa. GABA is found in almost all human synapses. One of the hallmarks of GABA is its low lipophilicity, which makes it difficult to cross the blood-brain barrier. Many researchers have been trying to find molecules with high lipophilicity that are neither fluorescent nor electrically active. It has a different role in different regions of the central nervous system and the peripheral nervous system. It can also be found in some tissues without neurons.

ABAT is responsible for the breakdown of gamma-aminobutyric acid (GABA), an important, mainly inhibitory neurotransmitter in the central nervous system, into succinic semialdehyde. GABA-transaminase is produced by the ABAT gene. The main function of ABAT is to suppress (neurotransmitters), in which case it prevents brain overload from a large number of signals. ABAT deficiency is a rare disease. The phenotype of ABAT deficiency includes psychomotor retardation, hypotonia, hyperreflexia, lethargy, refractory seizures, and abnormal EEG. GABA transaminase abnormality This enzyme causes brain disease in pediatric patients. The life expectancy of this deficiency is less than 2 years, and some survival exceeds the given life expectancy. Uncontrolled abnormal protein of GABA content will affect the growth of individuals (growth hormone) ). A decrease in GABA concentration can cause convulsions.

BAX, also known as bcl-2-like protein 4, is a protein encoded by the BAX gene in humans. BAX is a member of the Bcl-2 gene family. Members of the BCL2 family form heterodimers or homodimers and act as anti-apoptotic or pro-apoptotic modulators involved in a variety of cellular activities. This protein forms a heterodimer with BCL2 and acts as an apoptotic activator. This protein has been reported to interact with the mitochondrial voltage-dependent anion channel (VDAC) and increase its openness, resulting in loss of membrane potential and release of cytochrome c. The expression of this gene is regulated by the tumor suppressor P53 and has been shown to be involved in P53-mediated apoptosis. 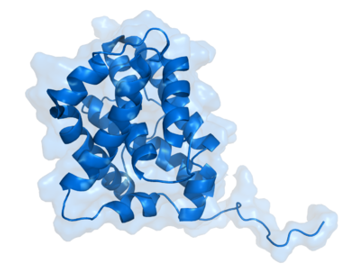 In healthy mammalian cells, most of the BAX is present in the cytoplasm, but after activation of apoptotic signaling, Bax undergoes a conformational transition. After induction of apoptosis, BAX is associated with organelle membranes, particularly with mitochondrial membranes. It is believed that BAX interacts with the mitochondrial voltage-dependent anion channel VDAC and induces its opening. In addition, there is increasing evidence that activated BAX and/or Bak form oligomeric pores, or MAC, in MOM. This results in the release of cytochrome c and other pro-apoptotic factors in the mitochondria, commonly referred to as mitochondrial outer membrane permeability, leading to activation of caspase. This defines the direct role of BAX in the extracellular membrane permeability of the mitochondria. BAX activation is stimulated by a variety of abiotic factors including heat, hydrogen peroxide, low or high pH, and mitochondrial membrane remodeling.