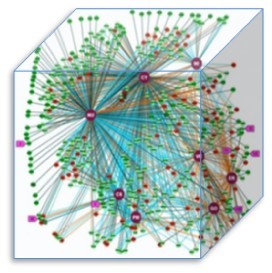 The picture shows the experimentally-determined subcellular localization of almost 500 human proteins using both immunofluorescence and GFP-tagging.

Microscopy-based method and fluorescent protein tagging  method are two of the most widely used approaches to determine protein localization. But the question that which one is better has argued for decades.

Where each protein locates in cell is a key factor for us to understand how cell works.

After the experiment, they found both antibody-based and fluorescent-tagging methods are highly complementary to each other, and show a high degree of correlation for the determination of protein localization in cells if they adhere to specific rules. The findings also provide a significant and experimentally validated data set of protein localization in mammalian cells.

The study solved a long argued issue and offers a valuable resource for the scientific community.