What Is Cancer Metabolism?

Compared with normal tissue cells, the metabolic pathways of cancer cells have changed significantly. Cancer metabolism includes aerobic glycolysis, reduced oxidative phosphorylation, and the increased production of biosynthetic intermediates required for cell growth and proliferation. Tumors reprogram the nutrient acquisition and metabolism pathways to meet the bioenergy, biosynthetic and redox requirements of malignant cells. These reprogramming activities are now considered to be a sign of cancer. How metabolism is reprogrammed in cancer cells and how metabolic changes are used to achieve therapeutic benefits are key questions that drive research in this area.

In cancer, the classic metabolic reprogramming pathway is the Warburg effect or aerobic glycolysis. Glycolysis is the physiological response to hypoxia in normal tissues, while Otto Warburg observed tumor sections and ascites cancer cells constitutively absorb glucose and produce lactic acid in the 1920s. This phenomenon has been observed in many types of cancer cells. Increased glycolytic flux allows glycolytic intermediates to provide subsidiary pathways to meet the metabolic needs of proliferating cells. 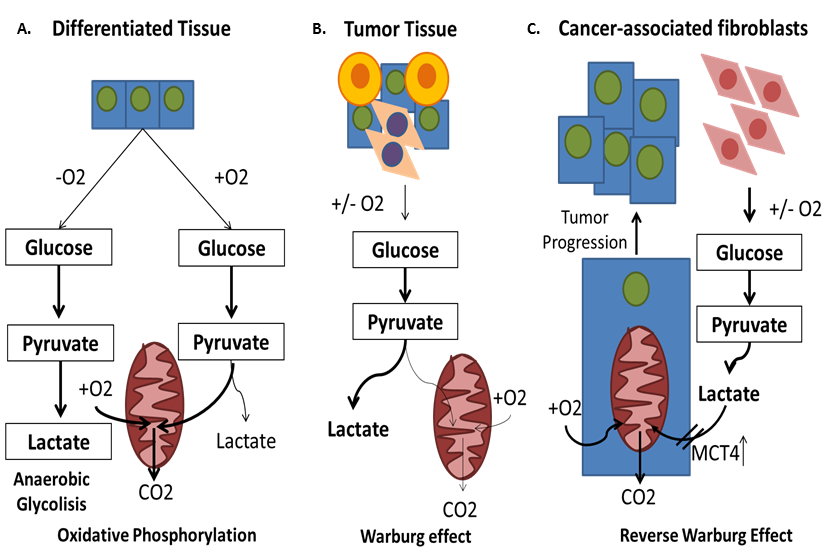 The TCA cycle intermediate can enter the circulation at sites other than acetyl-CoA. The two activities that provide anaplerotic fluxes in cancer cells are α-ketoglutarate and oxaloacetate. Among them, glutamine decomposes to produce α-ketoglutarate, and pyruvate carboxylates to produce oxaloacetate. Oxidation of the branched-chain amino acids (BCAAs) isoleucine and valine also provides an anaplerotic flux in some tissues.

Despite the genetic and histological heterogeneity of tumors, malignant tumors seem to involve a limited set of pathways to support core functions such as anabolism, catabolism, and redox balance. For example, normal cell growth factors activate phosphatidylinositol 3-kinase (PI3K) and its downstream pathways AKT and mammalian target of rapamycin (mTOR), thereby regulating anabolism. However, the tumor cells very frequently allow the PI3K-AKT-mTOR network to achieve high levels of signal transduction, with little dependence on the extrinsic stimulation of growth factors. Aberrant activation of this pathway is one of the most common changes in many cancers. Another common disorder in cancer is gain of function of MYC by chromosomal translocations, gene amplification, and single-nucleotide polymorphisms. MYC increases the expression of many genes that support anabolic growth, including transporters and enzymes involved in glycolysis, fatty acid synthesis, glutamine breakdown, serine metabolism, and mitochondrial metabolism. Oncogenes collectively select physiological functions of the PI3K and MYC pathways to promote tumorigenicity. In addition to oncogenes, tumor suppressors such as the p53 transcription factor also regulate metabolism. The p53 protein is mutated or deleted in 50% of all human cancers. The tumor suppressor functions of p53 include DNA repair, cell cycle arrest, senescence, and apoptosis.

A salient feature of many tumors is that they reside in a low-oxygen environment (hypoxia) ranging from 0 to 2% O2 because the tumor cell proliferation rate often exceeds the rate of angiogenesis. The metabolic adaptation to hypoxia is coordinated by HIF-1, which induces metabolic genes involved in increasing glycolytic flux. Some tumors display constitutive activation of HIF-1 under normoxic conditions through a variety of mechanisms, including hyperactivation of mTORC1, loss of von Hippel–Lindau, accumulation of ROS, and accumulation of the TCA cycle metabolites succinate or fumarate due to cancer-specific mutations in succinate dehydrogenase (SDH) or fumarate hydratase (FH), respectively. 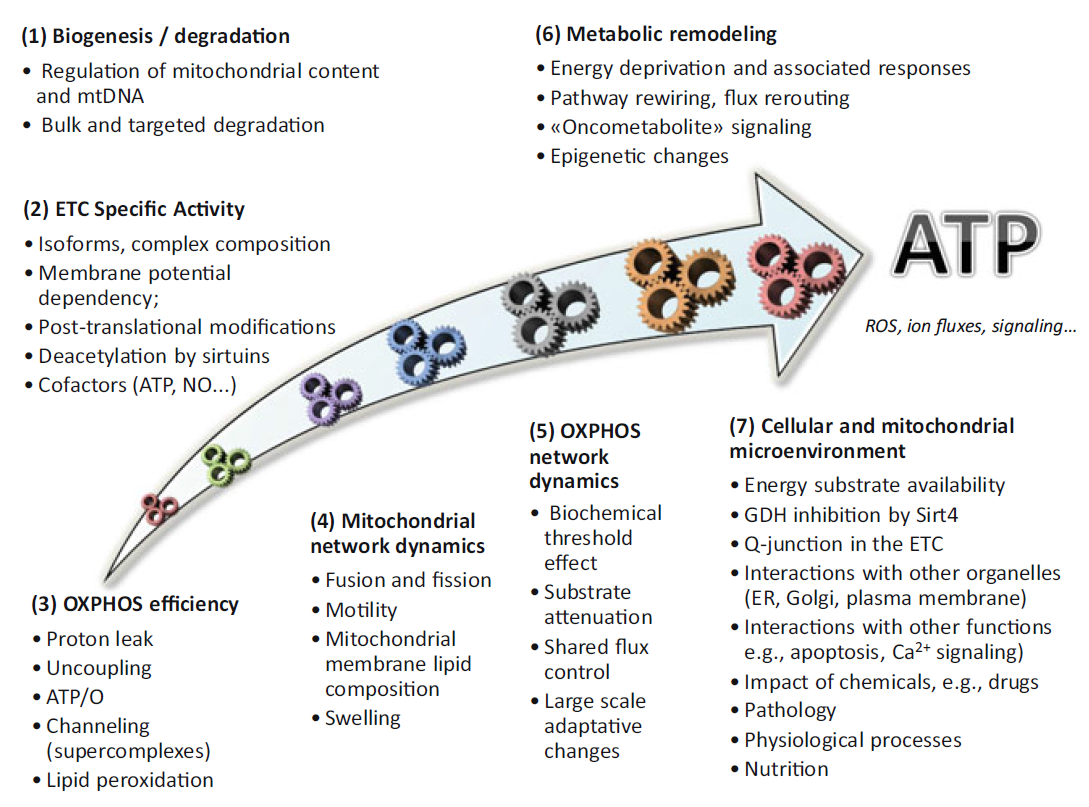 Cancer cells show aerobic glycolysis due to activation of oncogenes, loss of tumor suppressors and up-regulation of the PI3K pathway, and one of the advantages of high glycolytic rates is the availability of precursors for anabolic pathways. With a radioactive glucose analog to image glucose uptake in tumors and adjacent normal tissue, many human tumors show high glucose consumption rates. Despite this, many studies have shown that the vast majority of tumor cells have the ability to generate energy through glucose oxidation. In addition, limiting glycolytic ATP production by inhibiting the activity of pyruvate kinase does not prevent tumorigenesis, suggesting that the main role of glycolysis is not to provide ATP. Moreover, mitochondrial metabolism is essential for cancer cell proliferation and tumorigenesis. Therefore, despite the high rate of glycolysis, most cancer cells produce most of the ATP through mitochondrial function.

In addition to pyruvate derived from glycolysis, fatty acids and amino acids can provide substrates for the TCA cycle to maintain mitochondrial ATP production in cancer cells. Solid tumors contain significant perfusion heterogeneity, so many tumor cells are present in both nutrient-poor and hypoxic environments. When tumor cells become nutrient-deficient, they adapt to the microenvironment by reducing the need for ATP.

Anabolic or biosynthetic pathway is an important aspect of cancer metabolism because they enable cells to replicate macrophages that are required for cell division and tumor growth. The anabolic pathway involves the acquisition of simple nutrients (sugar, essential amino acids, etc.) from the extracellular space, followed by conversion into biosynthetic intermediates through core metabolic pathways such as glycolysis, PPP, TCA cycles, synthesis of non-essential amino acids, and finally the assembly of larger and more complex molecules through ATP-dependent processes. The three major categories of macromolecules most commonly studied in cancer metabolism are proteins, lipids and nucleic acids, which account for approximately 60%, 15% and 5%, respectively, of the dry mass of mammalian cells. Evidence indicates that all biosynthesis are under the control of the same signaling pathways that control cell growth and are activated in cancer through oncogenic mutations.

ROS are intracellular chemicals containing oxygen, including superoxide anion (O2-), hydrogen peroxide (H2O2) and hydroxyl radicals (OH•). Mitochondrial and cytosolic NADPH oxidase (NOX) produces O2- from a single electron reduction of oxygen. Low levels of ROS, particularly H2O2, can reversibly oxidize cysteine residues of proteins to positively regulate cell proliferation and cell adaptation to metabolic stress. However, as the concentration of H2O2 increases, the cell death signaling pathway starts and H2O2 is converted to OH•, which directly damages DNA, proteins and lipids. Cancer cells have an increased spatial localization of mitochondria and NOX-dependent ROS production rates compared to normal cells. This allows the proximal activation of signaling pathways and transcription factors necessary for tumorigenesis. The rate of spatially local ROS production that is specifically increased by cancer cells is due to a combination of carcinogenic lesions and the tumor microenvironment. 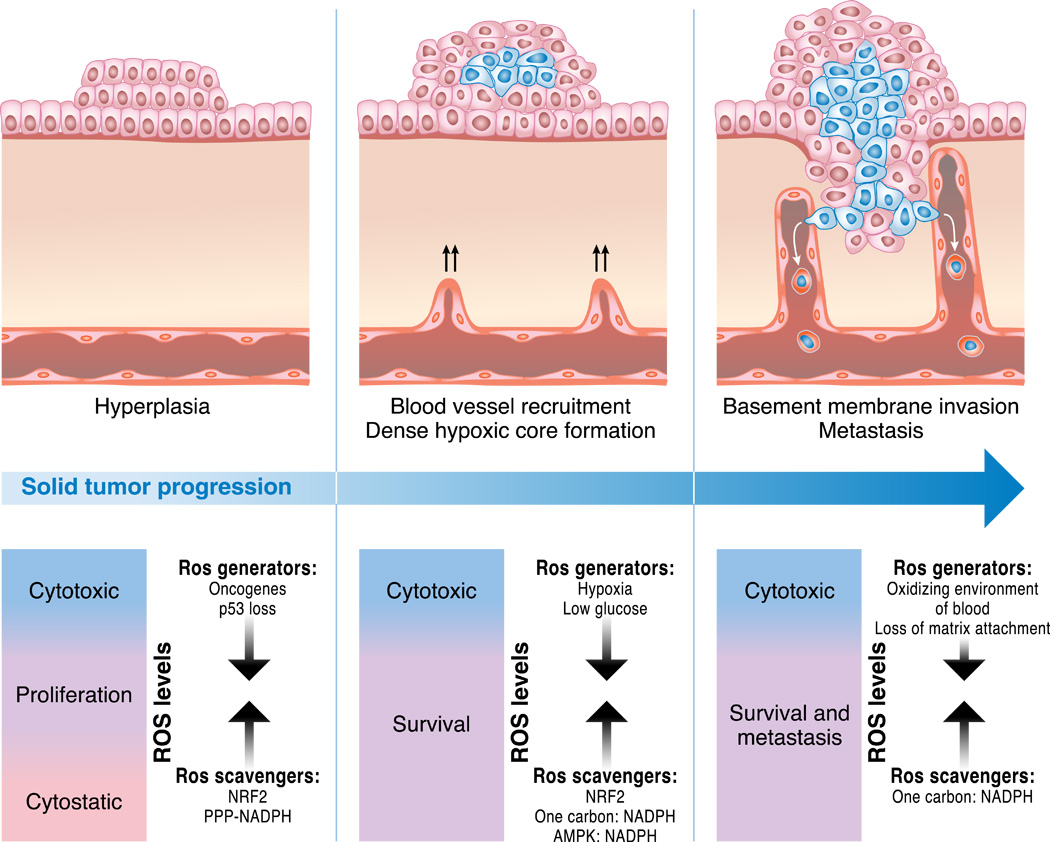