A variety of specific macromolecular interactions such as protein-DNA, protein-RNA, protein-protein, protein-lipid and protein-carbohydrate interactions are important in biological systems. Since the specific interactions between the cellular macromolecules form the basis for all biological processes, the ability to manipulate the formation of these complexes will open up possibilities to selectively interfere with these processes. Understanding the physical basis for specificity in the different systems and mapping the various networks of interactions is central to the subsequent reengineering of the processes.

Protein-protein interactions (PPIs) are implicated in almost all biological processes for any given protein engaged in complexes with other proteins for the majority of its life time, such as cell proliferation, viral self-assembly, differentiation, apoptosis and

signal transduction. In this regard, proteins function not merely as single, isolated entities, but display their roles by interacting with other cellular components. Many proteins are able to interact with multiple partners depending on availability and environment; this forms the basis of network complexity. The human interactome is large and has been estimated recently to contain around 650,000 interactions. The different interaction patterns are at least as important as the intrinsic biochemical activity status of the protein itself. Therefore, to understand the biological role of a protein it is of the utmost importance to know the underlying PPI network. This holds especially true in the case of diseases where mutations in oncogene or tumor suppressor proteins are recognized as the cause for malignancies.

Direct physical interactions of proteins are intricately implicated in the majority of processes in living organisms. This binding triggers the intracellular assembly and activation of signaling complexes comprised. 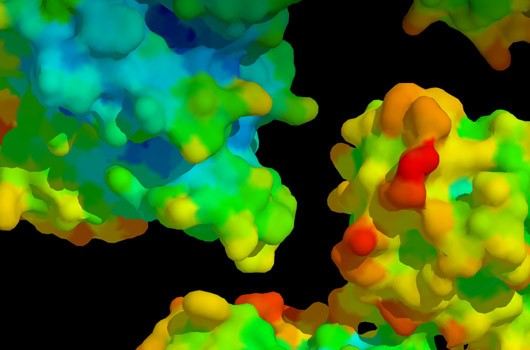 Many cellular functions like motility are related to functional changes in the cytoskeleton. For example, dynamic assembly and disassembly of actin filaments are based on the interaction of actin with itself and with protein partners. Biological recognition is also mediated by PPIs. The control of subcellular localization is another important aspect of protein regulation performed by PPIs. Also, direct regulation of biochemical activity by PPIs is performed many times by PPIs. Another important process involving PPIs is the functional constitution of transcriptional complexes. Many proteins of disease-causing organisms need host proteins as cofactors for their pathogenic activity.

Given the importance and number of PPIs in the living cell it is no surprise that they have to be tightly orchestrated at any moment in time. The occurrence and perseverance of PPIs is governed by the two principal variables local concentration and intrinsic binding energy of the binary interaction. The first is regulated by transcriptional and translational mechanisms, subcellular (co-)localization, degradation rates, and temporary storage. The second can be influenced by covalent modifications like phosphorylation, and by changes in pH, ionic strength, and temperature. Furthermore, additional PPIs can modulate binary interactions. They can be inhibitory when the interaction interface of one partner is masked by binding to the same interface or by simple sterical obstruction. They can also be stabilized when the third interacting protein binds simultaneously to both protein partners.

The study of DNA-binding proteins, in general, dates from the development of DNA-cellulose affinity chromatography in the laboratory of Bruce Alberts in the late 1960s. 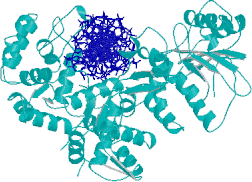 Recombination, replication and transcription of genetic material are all dependent on the formation of specific DNA-protein interactions. Protein-DNA recognition is characterized mainly by a topological readout strategy. Defined secondary structural elements such as α-helices contact the major groove of double stranded DNA to distinguish cognate form non-cognate sequences. Although most protein-DNA interactions rely on the major groove for recognition, there are also a number of important factors that interact with the narrow minor groove. Protein binds to DNA by directly contacting the bases or the backbone with the amino acid side chains of certain secondary structural elements. These specific interactions are mediated by electrostatic contacts, van der Waals interactions and hydrogen bonds. Protein-DNA complex formation is also commonly assisted by contacts between water and both polymers.

Ribonucleic acids are major players in many important biochemical processes. The formation of specific complexes between RNA and protein molecules is therefore crucial to a variety of cellular processes such as information transfer and storage, transcriptional activation, catalysis, post-transcriptional regulation of gene expression or the assembly and function of ribonucleoprotein particles such as the splicesosome and the ribosome.

Single stranded RNA can adopt a much larger variety of conformations than double stranded DNA and is comparable to proteins in this respect. It structurally differs from B-DNA in several significant ways. The helices are usually short (less than one turn) and A-form. Therefore the major groove is not very accessible for protein recognition. Overall this gives rise to a lot more possibilities for indirect readout than in DNA recognition processes. Indirect readout is enabled by the unique flexibility and conformation such as the twist between base pairs or the width of the groove that is acquired by each nucleic acid sequence. It is not directly involved in the residue-base interaction, but is necessary as an overall facilitator of complex formation.