Cyclin D1 is a protein encoded by the human CCND1 gene. The gene for Cyclin D1 belongs to a highly conserved family of cell cycles. The family has a cyclical change in protein abundance throughout the cell cycle. Cyclin D1 acts as a regulator of cyclin-dependent kinase CDKs. Different cyclins exhibit distinct expression and degradation characteristics that contribute to the temporal coordination of each mitotic event. 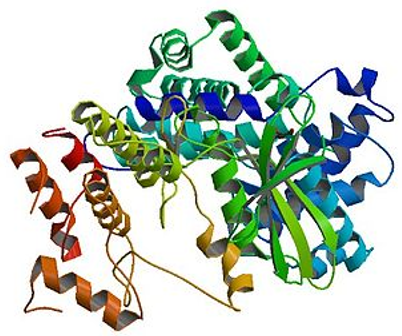 The coding gene of Cyclin D1 is located at 11q13 and has 5 exons with a total length of about 15 kb. Compared to other Cyclins, Cyclin D1 lacks a "knowledge box" fragment at the N-terminus and is therefore the smallest Cyclin. The half-life of Cyclin D1 is very short, less than 25 min. In the presence of growth factors, Cyclin D1 is first synthesized in the cell cycle and peaks in the middle of G1.

Cyclin is a eukaryotic protein, and the abundance of cyclins is usually regulated by protein synthesis and APC/C-dependent pathway degradation. Cyclin D is one of the major cyclins produced in terms of its functional importance. It interacts with four Cdk: Cdk2 (Figure 2), 4, 5 and 6. In proliferating cells, accumulation of the cyclin D-Cdk4/6 complex is important for cell cycle progression. The cyclin D-Cdk4/6 complex phosphorylates retinoblastoma tumor suppressor protein (Rb) and its inhibition can induce certain gene expression important for S phase. These three homologs, called cyclin D1, cyclin D2 and cyclin D3, are expressed in most proliferating cells, and their relative expression levels are different in various cell types. 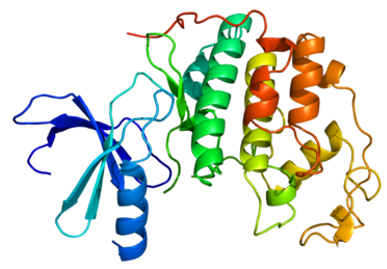 The main function of cyclin D1 is to promote cell proliferation. Cyclin D1 binds and activates the cyclin-dependent kinase CDK4, which is unique to the G1 phase, and the G1 phase inhibitory protein (Rb) is phosphorylated. The phosphorylated Rb protein is cleaved from its bound E2F transcription factor, E2F transcription factor is the gene that initiates the transcription of the cell cycle, thereby pushing the cell cycle from the G1 period to the S period. In addition, the study found that in addition to promoting cell division, D-type cyclin also has some functions that promote gene transcription independent of CDK kinase activity. Cyclin D1 can bind to histone deacetylase P/CAF, and can also bind to the transcription factor TFIID. By combining with these transcription factors, cyclin D1 plays a role in promoting gene transcription. At present, cyclin D1 has been recognized as a proto-oncogene, and its overexpression can cause cell proliferation to be uncontrolled and malignant. Studies have shown that Cyclin D1 gene overexpression and gene amplification have been found in a variety of tumors, including breast cancer, bladder cancer, parathyroid tumors, lymphoma, melanoma/lung cancer, and cell-centric lymphoma. There are many studies on the over-expression of cyclin D1 leading to uncontrolled and carcinogenic cells. Medically, the hypothesis of cyclin D1 expression as an indicator for the diagnosis of cancer and the role of cyclin D1 in cell cycle regulation have been proposed.