What is G protein?

G proteins is guanine nucleotide-binding proteins, represent a family of proteins. The G protein is known for its significant roles in many biological processes, including membrane vesicle transport, cytoskeletal assembly, cell growth and protein synthesis. G proteins serve as molecular switches in cells, and are involved in transmitting signals from a variety of stimuli outside a cell to inside, such as timer and amplifier (Fig.1). G proteins are trimeric structures composed of two functional units: an α subunit (39-52 kDa) that catalyzes GTPase activity and a βγ dimer (35 and 8 kDa, respectively) that interacts tightly with the α subunit when bound to GDP. There are 16 genes encode for Gα-subunits, five genes encode for Gβ-, and 12 genes encode for Gγ-subunits. 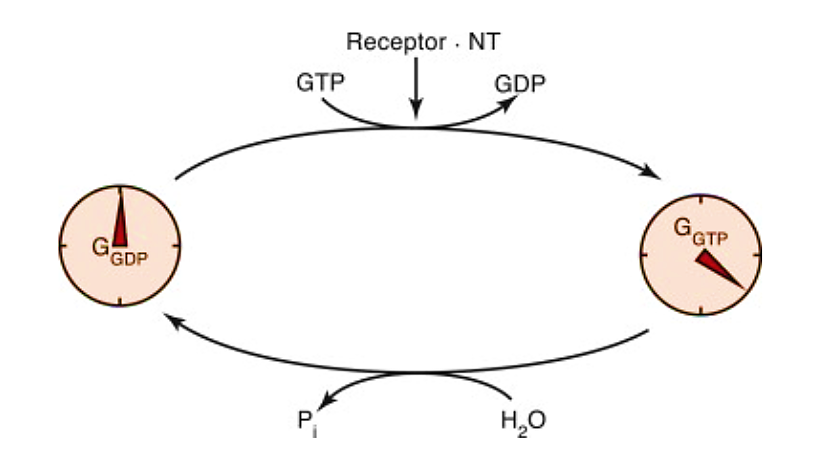 Classically, G proteins could be subdivided into four families based on similarity of their α-subunits: Gαi/o, Gαs, Gαq/11, and Gα12/13. Gα-subunits includes two domains: the GTPase domain which involved in the binding and hydrolysis of GTP. Another helical domain that buries the GTP in the center of the protein. The helical domain is a very different from other Gα members and plays an important role in directing specificity of receptor- and effector-G protein coupling. Comparison of Gαt-GDP and Gαt-GTPγS crystal structures has revealed three flexible regions, switches I, II, and III. They become more rigid and ordered in the GTP-bound active conformation. In two separate crystal heterotrimeric structures, the interaction between the N-terminal helix and the β-propeller domain of Gβ keeps the order of the N-terminal helix (Fig. 2). 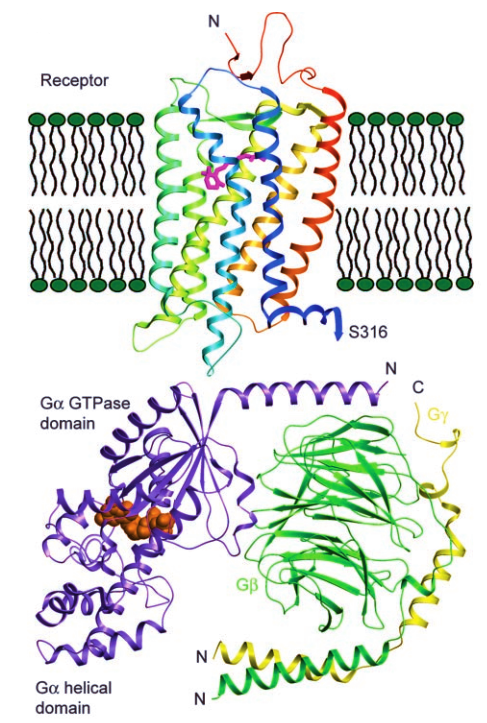 Biochemical studies show that these terminal regions play a crucial role in the activation and directing specific protein-protein interactions. The Gβ-subunit of heterotrimeric G proteins composed of a β-propeller structure containing seven WD-40 repeats. Through an N-terminal coiled coil, the Gγ-subunit interacts with the Gβ-subunit and extensively contacts along the base of the Gβ-subunit. The Gβγ-dimer binds to a hydrophobic pocket within Gα-GDP. GTP binds to Gα, thus the hydrophobic pocket removed and the affinity of Gα for Gβγ reduced. Currently, 5 different Gβ-subunits and 12 different Gγ-subunits have been identified, which means there could be 60 possible combinations if Gβγ-dimers formed randomly. Generally, most Gβ-subunits can dimerize with most Gγ-subtypes, biochemical studies showed that there are some exceptions to this rule. For example, Gβ2 dimerizes with Gγ2 in vitro but not with Gγ1, and Gβ3 does not dimerize with either Gγ1 or Gγ2. Although Gβγ-dimers with different compositions may be also formed in vivo, Gβγ-dimer combinations could exhibit cell type or tissue specificity as well. For example, in the retina the primary Gβγ-dimer is Gβ1γ1, however, Gβ1γ2 is the most common dimer appeared in the brain.

Function of Gα and Gβγ

G proteins are key determinants of the specificity and temporal characteristics of many signaling processes. Great amounts of hormones, neurotransmitters, chemokines, local mediators, and sensory stimuli affect cells by binding to heptahelical membrane receptors coupled to heterotrimeric G proteins. These dedicated transducers can modulate the activity of many signaling pathways and lead to corresponding biological responses. Combinations of Gα- and Gβγ-subunits are required for connecting individual receptors to signaling pathways in vivo. In addition to interaction domains of these acting proteins, the participation of scaffolding and regulatory proteins also required. 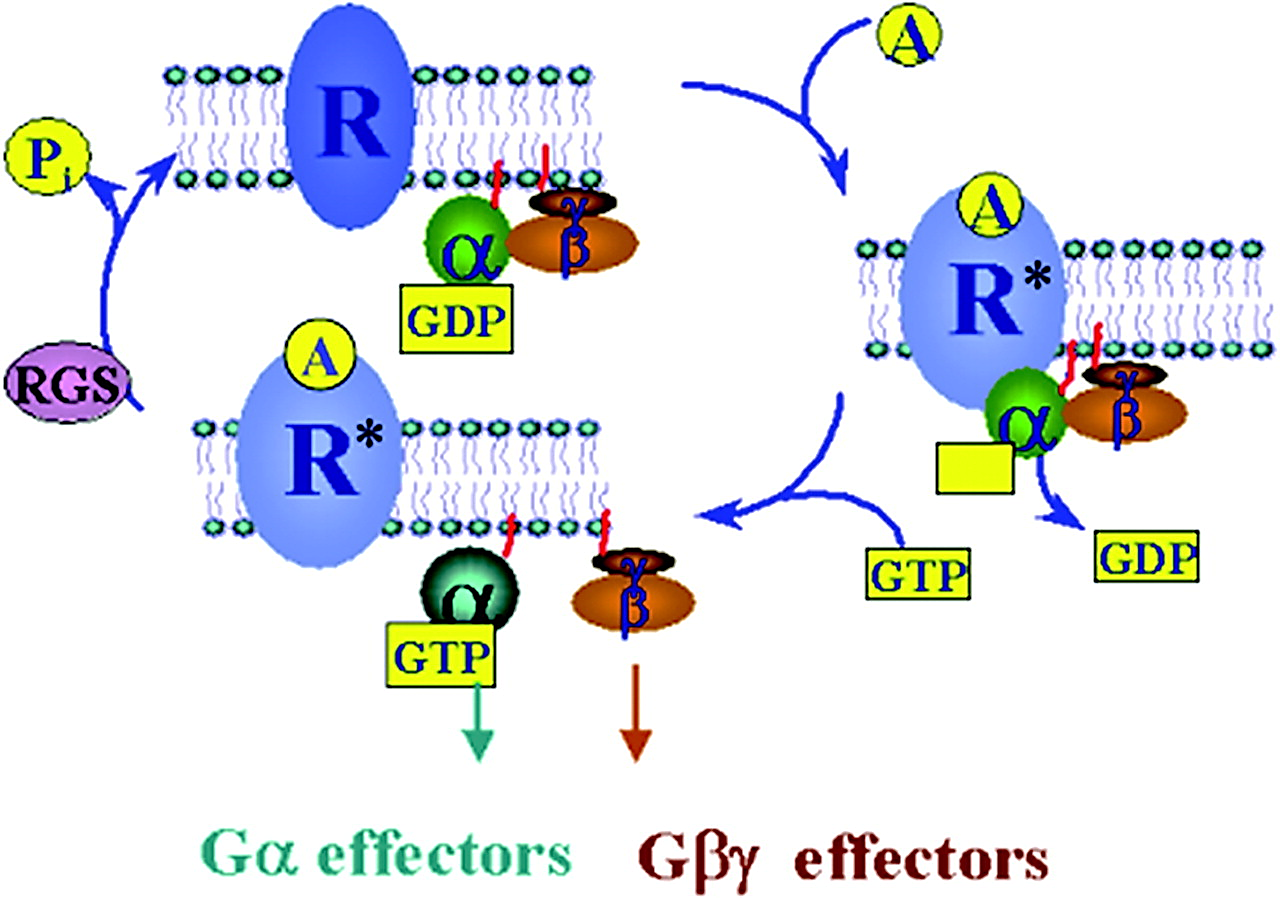 Figure 3. Function of Gα and Gβγ

When a ligand such as hormone, neurotransmitter or glycoprotein interacts with a heptagonal receptor on the cell surface, the ligand stabilizes or induces conformation in the receptor, thus activating the heterotrimeric G protein (composed of α, β and γ subunits) on the cell inner membrane surface. In the inactive heterotrimer state, GDP binds to Gα subunit. After activation, GDP is released, GTP binds to Gα, and then Gα-GTP is separated from Gβγ and receptor (Figure 3). Then, both Gα-GTP and Gβ-γ can activate downstream effectors freely. The duration of the signal is determined by the hydrolysis rate of endogenous GTP in Gα-subunit and the recombination of Gα-GDP and Gβγ.

The activation of G protein is mediated receptor. The interaction between endogenous ligands and their cell surface receptors (R) promotes the coupling of activated receptors (R*) and intracellular heterotrimeric G proteins. R*- G protein coupling promotes the exchange of GTP and GDP on Gα subunit. Then Gα-GTP was separated from Gβ-γ and R*. Both subunits can regulate the activity of various intracellular effectors freely. When the γ-phosphate of GTP is removed by the endogenous GTPase activity of Gα-subunit, the signal terminated and GDP is left in the nucleotide binding bag on Gα. Then Gα-GDP and Gβ-γ are reconnected and the cycle is completed. RGS (regulator of G protein signaling) protein can accelerate the endogenous GTPase activity of Gα subunit and shorten the duration of signal transduction. Structural and functional researches of heterotrimeric G proteins, their binding partners, and the signaling networks are hot topics. Another important uncertain mechanism awaiting to be revealed is that how signaling pathways interact with each other to form signaling networks, which will bring new insights.