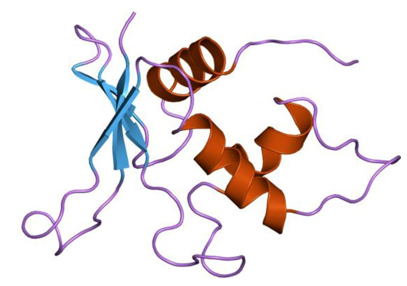 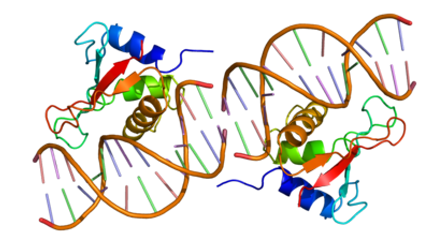 Figure 2. Structure of the IRF1 protein. 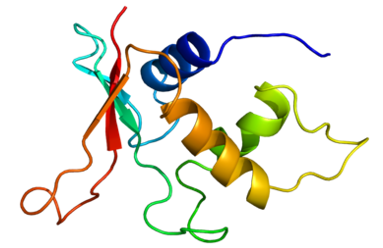 Figure 3. Structure of the IRF2 protein 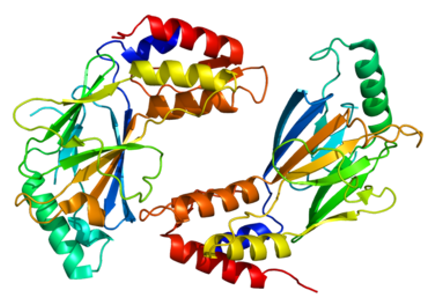 Figure 4. Structure of the IRF3 protein

Interferon regulatory factor 4 also known as MUM1 is a protein that in humans is encoded by the IRF4 gene, located at 6p25-p23. 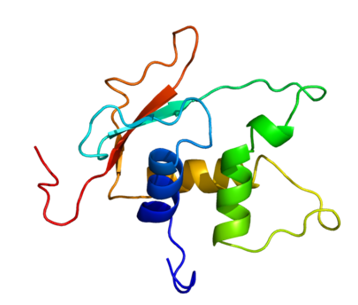 Figure 5. Structure of the IRF4 protein

IRF5 is a member of the interferon regulatory factor (IRF) family, a group of transcription factors with diverse roles, including viral-mediated interferon activation, as well as regulation of cell growth, differentiation, apoptosis, and immune system activity. Members of the IRF family are characterized by a conserved N-terminal DNA binding domain comprising a tryptophan (W) repeat.

IRF8, also known as interferon consensus sequence binding protein (ICSBP), is a protein encoded by the IRF8 gene in humans. IRF8 is a transcription factor that plays a key role in lineage typing and regulation of myeloid cell maturation, including the determination of common myeloid progenitor cells (CMP) to differentiate into monocyte precursor cells.

Interferon (IFN) is a group of signaling proteins that are produced and released by host cells in response to the presence of several viruses. In a typical situation, virus-infected cells release interferon, causing nearby cells to strengthen their antiviral defenses. IFN belongs to a large class of proteins called cytokines, and molecules used for intercellular communication trigger protective defenses of the immune system and help eradicate pathogens. Interferon is named for its ability to "interfere" with viral replication by protecting cells from viral infection. IFNs also have a variety of other functions: they activate immune cells, such as natural killer cells and macrophages; they increase host defense by upregulating antigen presentation by increasing the expression of major histocompatibility complex (MHC) antigens. Certain symptoms of infection, such as fever, muscle aches and "flu-like symptoms," are also caused by the production of IFN and other cytokines. More than 20 different IFN genes and proteins have been identified in animals including humans. They are usually divided into three categories: type I IFN, type II IFN and type III IFN. IFNs belonging to all three classes are important for the regulation of viral infections and the immune system.