other in cell cycle Proteins

other in cell cycle Proteins 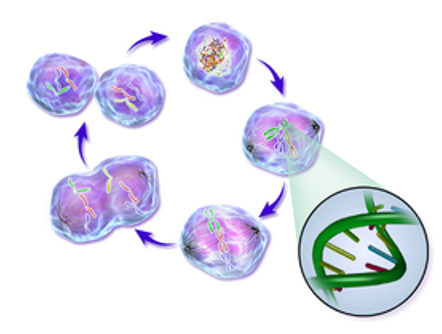 Figure 1. Life cycle of the cell.

The eukaryotic cell cycle is composed of four distinct phases: the G1 phase, the S phase (synthesis), the G2 phase (collectively referred to as the intermediate phase), and the M phase (mitosis and cytokinesis). The M phase itself consists of two tightly coupled processes: mitosis (where the nucleus divides) and cytokinesis, where the cytokines divide to form two daughter cells. The activation of each phase depends on the correct progress and completion of the previous phase. A cell that temporarily or reversibly stops splitting is said to enter a stationary state, called the G0 phase. After cell division, each daughter cell begins an intermediate phase of the new cycle. Although the various stages of the intermediate phase are usually morphologically indistinguishable, each stage of the cell cycle has a unique set of specialized biochemical processes that are ready for the initiation of cell division. 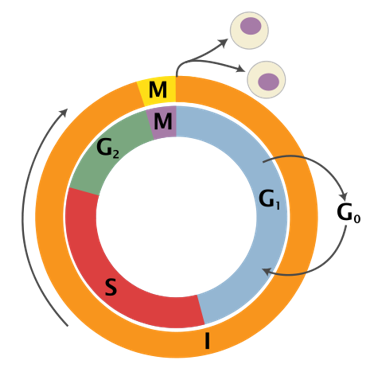 Figure 2. Schematic of the cell cycle.

Analysis of simultaneous culture of Saccharomyces cerevisiae under conditions that prevent DNA replication initiation without delaying cell cycle progression suggests that the source of origin reduces the expression of genes originating near its 3' end, suggesting that downstream origin can regulate upstream gene expression. This confirms the previous mathematical modeling of the causal relationship between DNA replication origin activity and mRNA expression and suggests that mathematical modeling of DNA microarray data can be used correctly. Predicting previously unknown biological patterns.

Deregulation of cell cycle components may result in tumor formation. When certain genes, such as cell cycle inhibitors, RB, p53, etc., mutate, they may cause uncontrolled proliferation of cells, thereby forming tumors. Although the duration of the cell cycle in tumor cells is equal to or longer than the normal cell cycle, the proportion of cells in the tumor that are actively dividing cells (relative to the stationary cells in the G0 phase) is much higher than in normal tissues. Therefore, the number of cells that die due to apoptosis or aging remains unchanged, so the number of cells increases. Since DNA is relatively exposed during cell division, it is easily damaged by drugs or radiation, and thus cells that are actively undergoing cell cycle become targets of cancer treatment. This fact has been exploited in cancer treatment. A large number of tumors are removed by a process called neutropenia, which pushes a large number of remaining tumor cells from the G0 phase to the G1 phase. Radiation or chemotherapy after the reduction procedure kills these new cells that enter the cell cycle.