Protein kinase A (PKA) is a type of cyclic AMP-dependent enzyme, also known as cAMP-dependent protein kinase A (cyclic-AMP). The role of PKA in cells is to regulate glycogen, metabolic lipids and so on. Protein kinase A (PKA) was first discovered by chemists H. Fischer and Edwin G. Krebs in 1968. They won the 1992 Nobel Prize in Physiology or Medicine for their work on phosphorylation and dephosphorylation and PKA activity. PKA is one of the most popular protein kinases which have been studied, in part because of its uniqueness. Among the 540 different protein kinase genes in humans, except for PKA, only casein kinase 2 is known to exist as a tetramer. After Stan Knight et al. discovered that PKA might have four C subunits and four R subunits, people began to realize the diversity of mammalian PKA subunits. In 1991, Susan Taylor and others obtained the internal structure of the subunit for the first time through the crystallization method, providing a model for the study of other kinases.

The PKA holoenzyme molecule is a tetramer composed of four subunits, two of which are regulatory subunits (referred to as R subunits) and the other two are catalytic subunits (C subunits). The relative molecular mass of the R subunit is 49-55 kDa, the relative molecular mass of the C subunit is 40 kDa, and the total relative molecular mass is about 180 kDa; the whole enzyme has no activity. Wherein the C subunit comprises an active site capable of binding and hydrolyzing ATP and a domain binding to the R subunit, the R subunit comprises a domain capable of binding cAMP, a domain binding to the C subunit and an auto inhibitory domain (auto inhibitory domain). There are two main forms of regulatory subunits: RI and RII. In most mammalian cells, there are at least two classes of protein kinase A, one in the cytosol and the other in the plasma membrane, nuclear membrane, and microtubules.

Extracellular hormones such as glucagon or adrenaline are first bound to the G-protein coupled receptor (GPCR) of the target cell. Due to the influence of kinetic factors, the receptor undergoes conformational transformation, and the Gs subunit exchanges its own GDP for GTP and is released from the complex. The activated Gs subunit binds to and activates adenylyl cyclase. Adenylate cyclase re-catalyzes the conversion of ATP to cAMP, increasing cAMP concentration. Binding of two cAMP molecules to the two cAMP binding sites CNB-A and CNB-B of the R subunit results in a conformational transformation of the regulatory subunit of PKA, releasing two catalytic subunits. Once released, the catalytic subunit phosphorylates other proteins containing the Arg-Arg-X-Ser/Thr sequence. 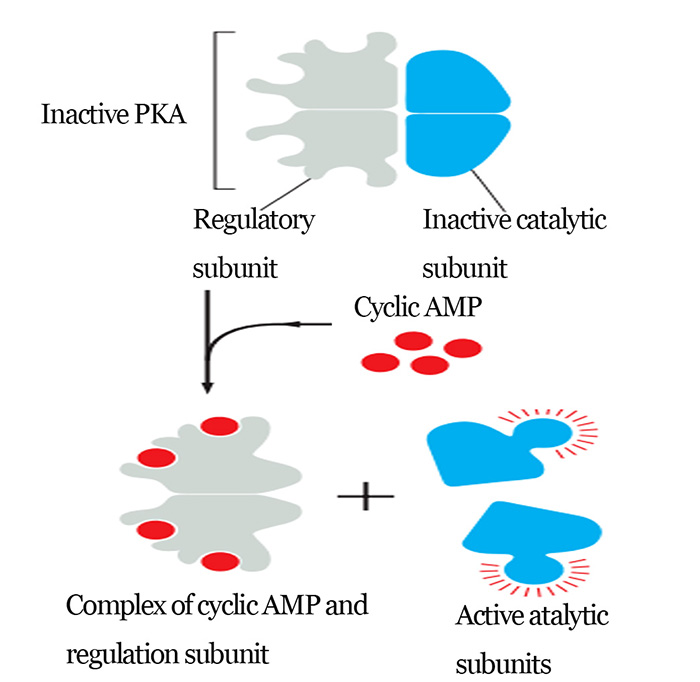 In an active configuration, the conserved aspartate-phenylalanine-glycine moiety (DFG motif) and magnesium ion chelate to aid in substrate and ATP localization, the catalytic subunit of PKA and thus the substrate, ATP and two Mg ions are tightly bound. The hydroxyl group of the serine/tryptophan of the substrate peptide chain attacks the third phosphate group of ATP by nucleophilic addition of SN2, allowing the group to be transferred to the substrate. The location of conserved amino acid residues is an important basis for distinguishing between active kinases and pseudokinesis, and PKA provides a good model.

AKAP can also bind to other signaling proteins to form information hubs at specific locations within the cell. For example, AKAP in the vicinity of the nucleus of cardiomyocytes binds PKA and phosphodiesterase (hydrolyzed cAMP) and acts to limit the activity of PKA.