What Is Tumor Hypoxia?

Oxygen is a prerequisite for animal life and it is the electron acceptor in mitochondrial metabolism providing the organism with energy, ATP, from carbohydrates. In higher animals, circulatory systems have evolved to provide all cells in the body with sufficient oxygen. During development and growth, low oxygen levels, or hypoxia, naturally arise in tissues and the response from hypoxic cells drives the co-development of the vasculatory system. Solid tumors are frequently hypoxic since maintaining oxygen homeostasis becomes increasingly difficult as the tumors grow. It is reported already in 1955 that poor perfusion and hypoxia led to internal necrosis in solid tumors. Cell growth leads to compromised perfusion by pushing cells further away from existing vessels as well as adding to intra-tumor pressure that disturbs the function of these vessels. The tumor-induced vessels are malformed and leaky, which further contributes to poor perfusion and increased intra-tumor pressure.

Hypoxic conditions elicit cellular responses that strive to preserve energy and monitor the generation of reactive oxygen species (ROS). Normal cells respond to low oxygen levels by repression of proliferation, decreased rate of oxidative phosphorylation, increased glycolysis and increased generation of angiogenic factors to restore perfusion. The hypoxic response in tumor cells deviates to varying degrees from that of normal cells. The Warburg effect, or increased utilization of glycolysis for energy even when oxygen is available, may prime tumor cells to better withstand hypoxic conditions. The occurrence and selection for tumor cells that can survive and grow under harsh intra-tumor conditions allow continued tumor growth. Low oxygenation in tumors is more or less concurrent with nutrient deprivation. Depending on the reason for hypoxia and the local demand for oxygen and glucose, glucose may diffuse over a wider tissue range than oxygen, and tumor cells can thereby have enough glucose to compensate for its less efficient utilization in energy production via glycolysis. Thus, hypoxic and hypoglycaemic tumor cells are different, but partially overlapping, populations.

Tumor hypoxia has long been recognized to be associated with poor prognosis and resistance to therapy, including radiation therapy. The physiological conditions causing hypoxia within the tumor have different duration and severity, which in turn leads to a dynamic oxygen environment. 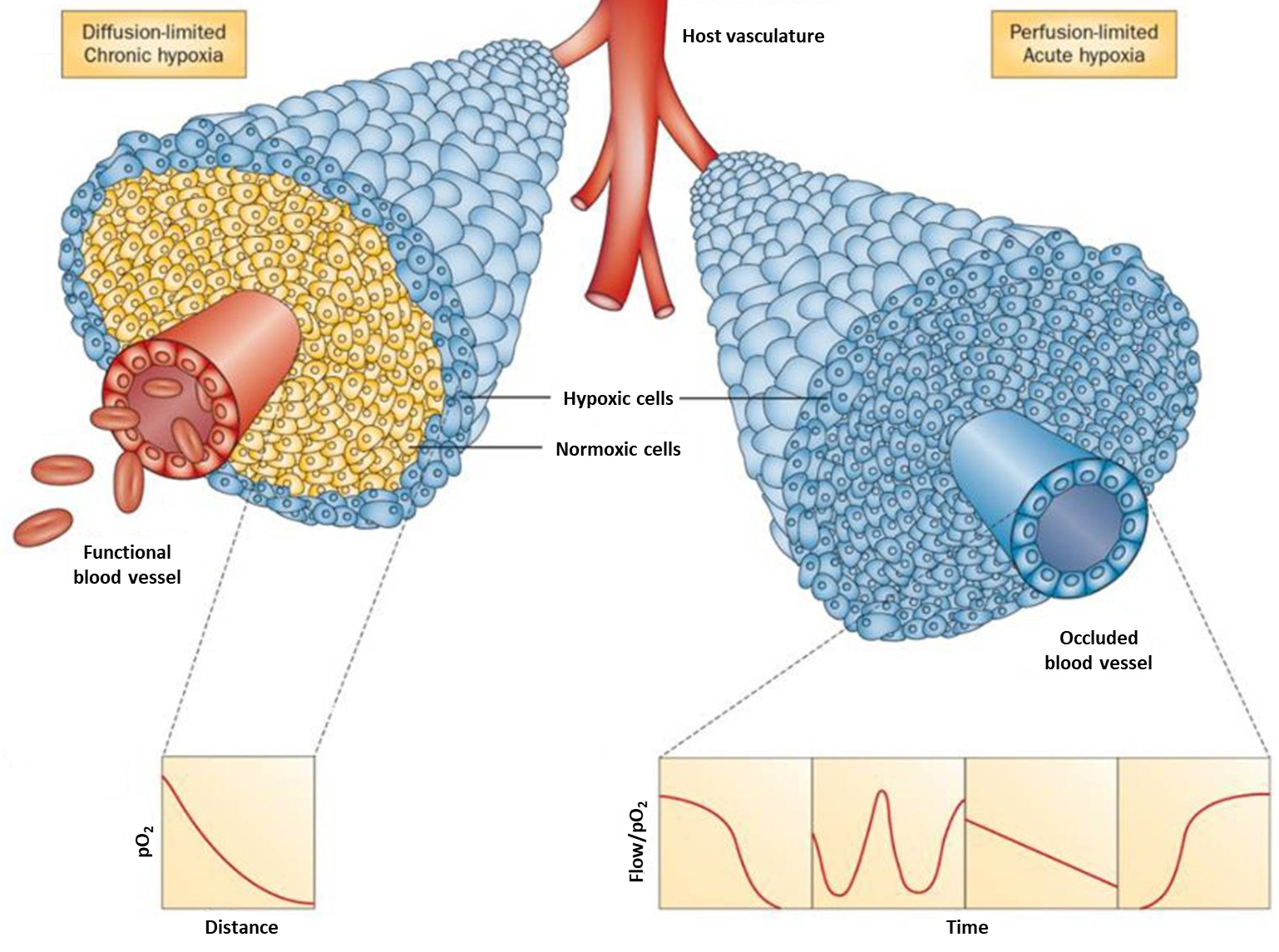 In general, it is accepted that acute hypoxia is an abrupt and brief exposure to short-term hypoxia which occurs when blood vessel occlusion lasts for at least several minutes. It is reversible and often leads to oxygen fluctuations called cycling hypoxia. In acute hypoxia in vitro, cells are usually exposed to continuous hypoxia between a few minutes and up to 72 hours. Short-term hypoxia allows cells to survive in these adverse conditions by activating autophagy, an apoptotic and metabolic adaptation of cells. Autophagy is achieved by decreasing oxidative metabolism. On the contrary, others have shown that cycling hypoxia led to increased reactive oxygen species (ROS) production, what contributed to tumor cell survival and progression. Moreover, both short- and long-term hypoxia was shown to increase radio-resistance of cancer cells both in vitro and in vivo.

Enduring changes in blood flow and low oxygen availability resulting in chronic hypoxia are especially pronounced in larger tumors and contribute to long-term cellular changes. In experimental settings, chronic conditions are considered when the cells are incubated in hypoxia between a few hours and as long as several weeks. Longer exposure to hypoxia is associated with high frequency of DNA breaks, accumulation of DNA replication errors since hypoxia hampers DNA repair systems including homologous recombination and mismatch repair, potentially leading to genetic instability and mutagenesis.

The HIFs are often referred to as the master regulators of the hypoxic response. These transcription factors belong to the large family of basic helix-loop-helix (bHLH) transcription factors also encompassing the MYC proto-oncogene, several tissue-specific transcription factors pivotal in organ development and their ubiquitous hetero-dimerization partners, the E-proteins. All these factors have an N-terminal basic DNA-binding domain followed by the helix-loop-helix domain mediating factor dimerization. The HIFs belong to a subgroup of bHLH factors defined by the PAS (Per, ARNT (aryl hydrocarbon receptor nuclear translocator, aka HIF1-beta), Sim) domain that takes part in factor dimerization. The transcription-activating complex consists of an alpha and a beta subunit, where the alternative beta subunits are also known as ARNT1, ARNT2, and ARNT3, respectively, and these are also part of the aryl hydrocarbon receptor complex. Three HIF-alpha subunits have been identified: HIF1-alpha (HIF1a), HIF2-alpha (HIF2a) (encoded by the gene EPAS1) and HIF3-alpha (HIF3a) (aka IPAS). HIF1a and HIF2a both form transcriptionally active complexes with HIF-beta subunits, whereas HIF3a, a transcriptional target of HIF1a that comes in a number of splice variants, has mainly been attributed negative regulatory functions. HIF1a and HIF2a show a large degree of homology, and on the C-terminal side of the PAS domain, they both harbor regions involved in post-transcriptional regulation in response to oxygen availability overlapping with the two trans-activating (N-TAD and C-TAD) domains.

Blood vessels create a network of tubes and capillaries which nourish the entire body with oxygen and nutrients. Abnormal angiogenesis is a feature of pathological conditions including tumor progression, where hyperproliferating cancer cells surpass their blood supply and become hypoxic. Hypoxia induces the imbalance between pro- and anti-angiogenic factors’ production, which leads to enhanced, rapid and chaotic blood vessel formation. Hypoxia and potent transcription factors HIF-1α and HIF-2α have been shown to be involved in all steps of blood vessel formation. However, in tumors, neovessels are often abnormal, immature, and leaky. They are either insufficient or excessive depending on the tumor type. Neovasculogenesis maintains blood flow to the growing tumor tissue that expands rapidly, providing nutrients and oxygen for thriving cancer cells; however, more cells means more demand causing even more hypoxia. Again, hypoxia in turn stimulates angiogenesis to ameliorate hypoxic condition, closing the vicious circle. As a consequence the tumor tissue ends up being highly hypoxic with excessive but dysfunctional vasculature.

Enhanced angiogenesis is associated with metastasis since permeable and heterogeneous vasculature facilitates the extravasation, circulation, and relocation of tumor cells of tumor cells to new and unaffected tissues escaping the hostile hypoxic environment. Tumor oxygenation is a critical factor of cancer progression and the overexpression of HIF-α subunits in tumors and their metastases is associated with the aggressiveness of a majority of human cancers and correlates with poor overall survival. Mechanistically, hypoxia was shown to influence invasive and migratory behavior of cancer cells via EMT, a trans-differentiation of cells in order to acquire plastic and mobile abilities, a process which alters their gene expression prior to migration. EMT is physiologically active during embryogenesis and tissue regeneration, as well as in cancerogenesis in many types of solid tumors and hematologic malignancies. Hypoxia-induced EMT is characterized by a decrease in epithelial-associated gene expression and an increase in mesenchymal-like gene expression.

Resistance of cancer cells to treatment-induced apoptosis is one of the biggest obstacles in cancer therapy. Hypoxia confers treatment resistance of cancer cells by regulating processes such as i) inducing cell cycle arrest (quiescence), a state of reduced cell proliferation which protects the cells from external stress, ii) inhibiting apoptosis and senescence of cells, iii) controlling autophagy, p53, and mitochondrial activity. Apart from cellular adaptations influenced by hypoxia, lowered oxygenation of the tumor tissue confers chemoresistance by affecting iv) drug delivery and cellular uptake through associated acidity and drug efflux pump expression such as P-gp, as well as by the v) lack of oxygen required for the cytotoxicity of a number of chemotherapeutics. 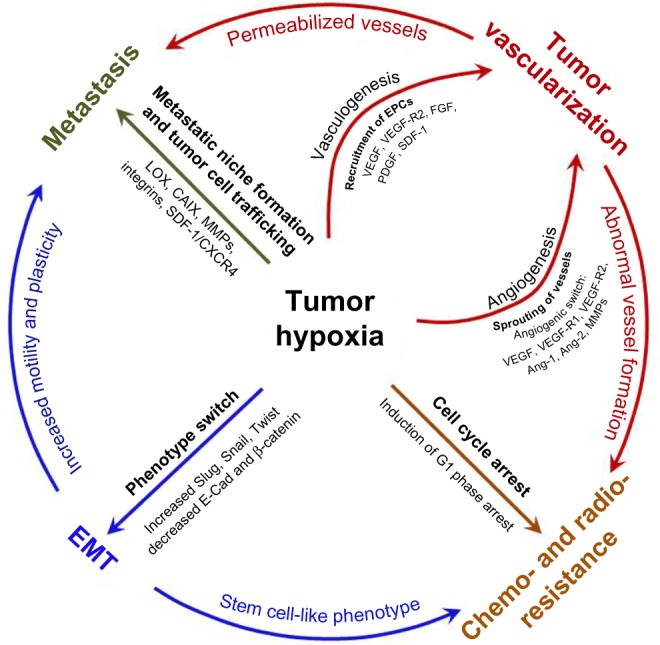 Many of the presented findings demonstrate that hypoxia critically interferes with tumor progression and tumor aggressiveness. As a consequence, a series of studies are currently underway targeting molecular processes related to tissue hypoxia in tumor cells. Some of the recent studies have already provided evidence that tumor growth might be influenced via interference with transcription factors, such as HIF-1α. Since the molecular mechanisms are becoming more and more clear future therapies may find new target molecules in tumor cells, finally leading to a more efficient treatment of aggressive and metastasizing tumors.